It’s an excuse for their loss. 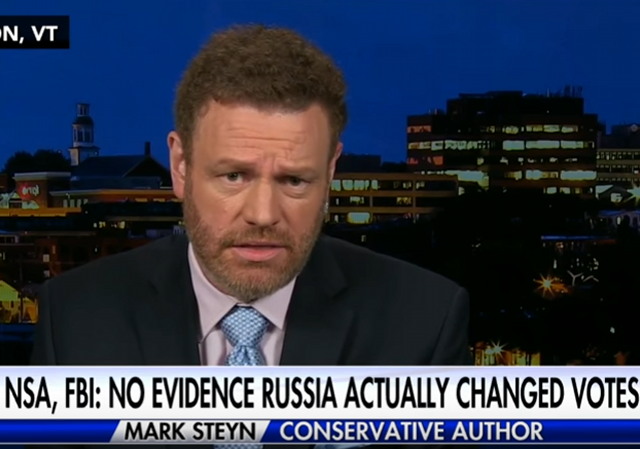 Conservative author and broadcaster Mark Steyn was on the Tucker Carlson show this week and was asked for his thoughts on the Democratic Party’s current obsession with Russia. Steyn explained it quite simply suggesting that Democrats can’t accept the fact that they lost the election. It’s easier for them to believe it was stolen from them.

Author and commentator Mark Steyn said Democrats in Congress effectively made Russian President Vladimir Putin a “Bond villain” by continuing to accuse them of interference and spying.

“The Democrats turned Putin into a Bond villain: the man with the spider’s touch,” he said, using a line from 1964’s “Goldfinger” theme to recount the way Rep. Jackie Speier (D-Calif.) described Putin on Monday,

“They want to believe that they didn’t lose the election… that someone stole it from them,” Steyn said, calling their drumbeat against Russia “nuts.”

He said that the federal investigation into Russia’s actions is akin to doing Putin’s bidding, by appearing to undermine an American president “more than having some cabinet secretary in [Putin’s] pocket would.”

The Democrats’ use of Russia panic has become such a catch-all excuse that it’s now being used as a ploy to delay Trump appointments. The Hill reports:

As the Senate Judiciary Committee continued its hearing on Gorsuch’s confirmation, the Democratic senator sent a flurry of tweets to say the Russian investigation should take priority…

They’ve got nothing else.

Yes, the D’s are besides themselves, their candidate could not win a rigged election! Can’t be Hillary’s fault, blame the Ruskies.

notamemberofanyorganizedpolicital in reply to Romey. | March 22, 2017 at 7:36 pm

Crooked Hillary could not steal an already “bought and paid for” stolen election.

You think they have nothing now, what about when this investigation craps out?

Hold on pilgrim, you’re riding too fast. My read on Comey is he intends to keep this investigation going as long as the Democrats need him to.

At times during the course of his testimony, it appeared that Comey and Schiff had rehearsed their act. When Schiff asked Comey if Putin would like to see more Brexits, Comey said yes. I would have loved to ask Comey why. I bet he couldn’t answer.

notamemberofanyorganizedpolicital in reply to Arminius. | March 22, 2017 at 7:38 pm

So your opinion is that Comey and Schiff are COLLUDING??????

Arminius in reply to notamemberofanyorganizedpolicital. | March 22, 2017 at 8:14 pm

The whole problem for the Democrats is not who stole the e-mails.

The problem is the e-mails told the truth.

Warren just told us what the Dems’ next move is: delay Gorsuch vote in retaliation for non vote on Garland. Who the hell is running the senate? According to what we see everyday, the Dems act like they still are. Hey, Mitch, Are you awake? It’s time to use the nuclear option! And, don’t weasel out on us. We cannot allow Warren, Schumer and Maxine Waters to act like they are driving the entire narrative, we did not vote for this!

Question on Comey, Clapper, Brennan, et al: Is there any statute, legal principle or otherwise that would prevent Trump from declassifying the investigations Comey is working on and all the so called sensitive information he says he cannot comment on? I think this drama cannot go on for four years. It is analogous to a slow death by a thousand cuts. Open the bomb bay doors and it’s bombs away…

I don’t believe it.

They’re smarter than that. And far more sinister.

Much like the Warmunism con; the bigwigs know perfectly well what they’re doing. The rank and file think it’s genuine, but the Dems think their voters are whackjobs and they’re accustomed to feeding them pure bilgewater.

It’s all an attack on Trump. Standard playbook (I said they’re smarter than that, not that they’re creative)—

When that doesn’t work …

When that doesn’t work …

Still not working. Trump doesn’t care about that dross, and neither do his supporters. So they need a new one.

This one could be tricky … they don’t want it to get too close to “he’s a communist” because to them that’s not a bad thing … but now that the Russians aren’t communists, it should be safe.

Meanwhile, not all their agents are really allies. Comey, for example. Comey’s trying to keep everybody guessing, mainly by bluffing them into treating him like a more major player than he is. But he’s not (at least not obviously) part of the anti-Trump axis; he’s interested in his own professional survival.

The Dems think their voters are whack jobs? Dems have worked to make them whack jobs – and one Dem has admitted it!

Democrats have “been quite content to demean government, drop civics and in general conspire to produce an unaware and compliant citizenry.”
https://wikileaks.org/podesta-emails/emailid/3599

IMO I think that Comey is covering for Hilary. The on again, off again Hillary investigation I think was a smoke screen to keep the real issues hidden. Same with the Russian thing. If the covers can be pulled back, we are in for a real soap opera.

When you only use your index finger to pick your nose, all the world looks like a bunch of nostrils just begging for you to shove your finger in up the elbow.

One Note Samba players, but with a thousand “verses” to the song.

Not original, but annoyingly irritating, like a bad rash you can’t quite reach.

We need to keep applying the Truth Ointment in “liberal(!)” quantities until we eradicate the malignant infection.

I think that following the leaks is going to be huge to blowing things wide open Warren and Schumer are going to be fighting for their political life when it is all done. Money always comes in to play on these things and with Booze-Allen taking a hit for Snowden and Martin. I think the FBI raid on Martin was to plug the leaks that would really damage the democrats.

Something to think about:

Here is the story on Martin arrested in August of last year:

The arrest raises the embarrassing prospect that for the second time in three years, a contractor for the consulting company Booz Allen Hamilton managed to steal highly damaging secret information while working for the N.S.A. In 2013, Edward J. Snowden, who was also a Booz Allen contractor, took a vast trove of documents from the agency that were later passed to journalists, exposing surveillance programs in the United States and abroad.

The contractor was identified as Harold T. Martin III of Glen Burnie, Md., according to a criminal complaint filed in late August and unsealed Wednesday. Mr. Martin, who at the time of his arrest was working as a contractor for the Defense Department after leaving the N.S.A., was charged with theft of government property and the unauthorized removal or retention of classified documents.

notamemberofanyorganizedpolicital in reply to MarkSmith. | March 22, 2017 at 11:19 pm

“MARTINSBURG — Historic law firm Martin & Seibert will close today, it has been revealed.

As I read it, the key words are in this quote, “…“They want to believe that they didn’t lose the election… that someone stole it from them,” Steyn said…”.

It’s a replay of the ‘stolen election’, ‘selected not elected’, ‘not my president’ process of de-legitimizing President Bush, now being deployed against President Trump.

Oops, Were, not where, needs coffee…

Slightly off subject, but the question is getting urgent:

Why does nobody ask Comey how the investigation into the
nefarious machinations of Robert Creamer et al. (DNC) was getting along? Surely, after the world got to look at the videos of
Project Veritas last fall, Mr. Comey checked out that story backwards and forwards? He didn’t? Well then, did anyone ask him why not?