Maddow wishes media had more resources to “fight back” 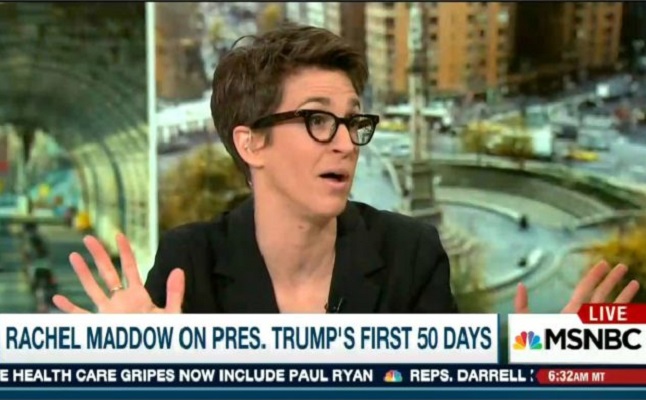 Looks like Rachel Maddow’s feminist solidarity doesn’t extend to Melania Trump . . . Appearing on Al Sharpton’s MSNBC show this morning, did Maddow express outrage over a newspaper report on the possibility that Melania Trump had in the past worked as an “escort?” Not at all. To the contrary, Maddow described Melania’s lawsuit against the newspaper involved as part of an “attack” and “assault” on the media. Maddow fretted that the media lacked the resources to “fight back.”

Maddow never identified the newspaper in question. In fact, far from lacking resources to “fight back,” the Daily Mail announced in 2012 that it was the largest newspaper website in the world. It has annual revenues in the billions of dollars.

How do you think Maddow would have handled matters if it had been a leading liberal lady who had been accused of working as an “escort?”

RACHEL MADDOW: I’m proud of the press in the first 50 days of the Trump administration, but do I think the press is under attack? Absolutely. Do I wish the business model of American journalism was stronger and that the media had more resources to fight back against the inevitable fights to come? Yeah, I do worry about that.

I look at the First Lady, Melania Trump, and her $150 million lawsuit against a blogger and against a newspaper for something that they printed about her that they then retracted and apologized for and she doesn’t care. She’s going after them for $150 million and her lawyer is the one that put Gawker out of business. I look at stuff like that and I wish that American media, I wish that news in this country had more resources, more support, was shored up even stronger than it is, because I think it’s — we’ve seen the first wave of the assault and there’s more to come.

The media needs to be taken out behind the woodshed and given a good thrashing.

Better than that. The media needs to start serving their sentences……

So, Maddow thinks if the paper retracts it, Mrs. Trump should just be accommodating and dismiss her lawsuit…. No, she shouldn’t. Because if she does, the newspapers will think they can write any libelous thing they wish, get the defamatory information out there, and everything will be groovy. They’ll just have a backup plan to retract it after she complains. Win/Win for the paper.

She’s right to continue the suit.

Not to mention that the only reason they retracted it was that Melania was able to legally prove that those outlets knew that the charges were completely fabricated when they printed them.

THAT’S why the lawsuit was going on. You don’t get to take potshots at will at people and then just say “oh, yeah, sorry bout that” when you get caught red-handed.

Yes, she is. These people put this filthy story out on the internet, knowing that it would be seen and read and whispered about by the friends of Melania’s 10-year old son. There is no way a retraction or an apology can ever erase that lie from the minds of Melania’s son, or from the minds of her other family, or her friends, or her business associates, or the public at large. The Daily Mail and the blogger deliberately defamed Melania, and they did so for blatantly political purposes. It was libel per se, and the offenders should pay a very heavy price for it. They deserve no sympathy, and hopefully, a jury will give them none.

Maddow wishes media had more resources to “fight back”

If by ‘resources’ she means ‘brains’, then good luck with that.

…I wish that American media, I wish that news in this country had more resources….

…..says this pathetic, whiny representative of the group who brags about “buying ink by the barrel” and who control the message, the narrative on ALL people hear and glean, around the world.

What a crybaby, what a snowflake. Most of all, what a shameful representation of what journalism and the news media in America has become.

There are “serious but unverified” reports that Rachel Madcow hired Melania when she was an escort.

You seem to have forgotten the “anonymous sources” that have become the evidentiary standard for reporting something without any mention of skepticism these days.

And do not forget “some say”…

Or, you know, they could just NOT print false and defamatory stories. But I guess that’s just asking too much.

The media seems to be under the impression that the First Amendment only applies to them and exempts them from criticism or consequences for what they say or write.

Maddow proves once again that Trump is correct… the “media” ARE the opposition party.
They really are pretty stupid.

Maddow wishes the media had more resources to fight back? What do you call ink by the tanker truck load; broadcasting wattage measured in millions; bundled cable contracts; and a more or less captive base of potential advertisers?

This is not to mention taxpayer-subsidizing of the NY Times. This is via the BushPhone money taken by force from taxpayers to buy Carlo Slim’s services, the profits of which keep the NY Times propped up.

Maybe she should get in touch with George Soros?…

I have a theory that part of the problem with the media is that they have access to TOO MANY resources.

In the early days of television news in the ’50s, CBS, ABC, and NBC were all small standalone companies. Their reputation was everything. If they got a story wrong, it would potentially impact non-news programming. Perhaps fatally. So they had to be very careful about their reporting.

The largest shareholder of the New York Times is Mexican billionaire Carlos Slim – usually ranked as one of the top five richest men in the universe. WaPo is owned by billionaire Jeff Bezos.

The point is that the news reporting operations are now very small operations relative to all programming and the programming side is a tiny part of the giant behemoths that own them. Getting a story wrong or being tarred as biased won’t impact Comcast or Disney’s overall financial performance. Yes, the execs responsible for managing the news units may get fired if they get something grossly wrong or intentionally misreport a story, but it is no longer potentially fatal because they are insulated by the resources of the larger conglomerate.

I’m not sure if my theory is right or not, but it sorta makes sense. At least it does to me.

I read somewhere a long time ago that the major news departments were fine as long as they weren’t supposed to make a profit. Apparently the networks viewed them as “loss leaders,” basking in the sunlight of the goodwill created by good reporting.

Then in the early 1970s the networks decided that the news divisions had to show a profit like everyone else, and it was downhill from there.

$150 Million will get media to make sure they don’t use ‘fake facts’ . About time they get punched in the wallet for mis-using the 1A.

The First Amendment guarantees a right. Abuse it at your own peril.

You can slip this sentence in between the two above:
It does not insulate you from the consequences of its abuse.

Yeah, I do worry about that.

Good. It’s what makes the world go ’round.

But I’m not going to say anything about “de lamentations of de women” because it’s … you know … Rachel.

They said she was a whore. And they knew it was bullshit, but they printed it anyway, because they don’t like her husband’s politics and were trying to hurt him by smearing her.

They should consider themselves lucky the lawsuit is not for more than $150 million, given the circumstances.

Or, that knees are not being given an introduction to baseball bats.

She believes she and al are “journalists”?
That’s a laugh.

So, if someone slandered Rachel Maddow, and she sued them, Maddow would be guilty of and attack on the press. Rather than pursuing her legal options under the law.

Some guy on TV.

Dang! That guy needs to get him some different glasses! They make him look like a dork!

Wasn’t it Rachel Maddow who accused a Trump supporter of attacking a liberal by repeatedly smashing the liberals fist with his face?

Maddow is to veracity what Twinkies are to nutrition.

She and her lefty pals in the opposition party formerly known as the media seem determined to keep using the same kinds of lies, distortions and just plain b.s. that made them have very little credibility with the public.

Oh the poor, poor, media!
What did they do to deserve this?
Don’t answer that…