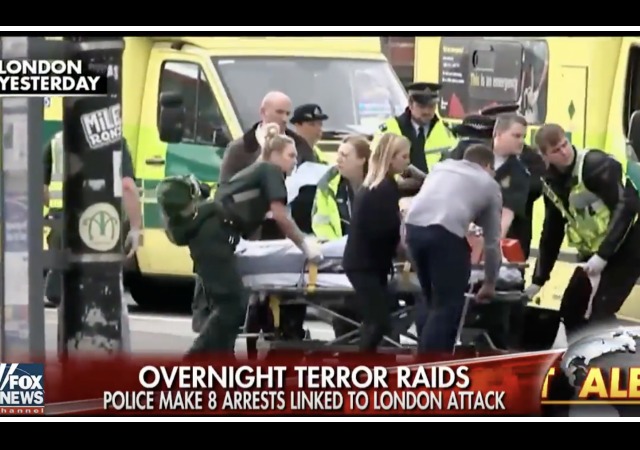 Yesterday, a man in an SUV mowed people down on Westminster Bridge before he drove into the perimeter fence at Parliament. The man exited the car and stabbed a police officer before other officers shot him down.

Today, the Islamic State (ISIS) claimed responsibility while British officials arrested seven or eight in six raids across London and Birmingham. The authorities have identified the attacker as Khalid Masood, 52-years-old.

Police have named the #London attacker as 52-year-old Khalid Masood, who had a number of aliases. He was known to the police #Westminster pic.twitter.com/ze86ThP1yr

Authorities identified the attacker yesterday, but only released his name this afternoon.

Khalid Masood, 52, was born in Kent and lived in the West Midlands. He had a wife and three children and taught English. He also recently converted to Islam.

Masood had numerous previous convictions and aliases. The police stated they had “no prior intelligence about his intent to mount a terrorist attack” and did not belong to any current investigations they have. Sky News continued:

Nevertheless, “he was known to police and has a range of previous convictions for assaults, including GBH, possession of offensive weapons and public order offences”.

“He has not been convicted for any terrorism offences.

“Anyone with any information about Masood can call the Anti-Terrorist Hotline 0800 789 321.”

ISIS claimed responsibility for the attack today through its official media agency Amaq:

“The perpetrator of the attacks yesterday in front of the British Parliament in London is an Islamic State soldier and he carried out the operation in response to calls to target citizens of the coalition,” the Amaq statement said.

As mentioned above, the authorities just released the name of the attacker as Khalid Masood. Earlier this morning, British Prime Minister Theresa May clarified that he was born in the United Kingdom and officials had investigated him before:

“Our working assumption is that the attacker was inspired by Islamist ideology,” she told members of Parliament. “We know the threat from Islamist terrorism is very real. But while the public should remain utterly vigilant, they should not and will not be cowed by this threat.”

British officials did not release the attacker’s identity or confirm a link with the Islamic State group, though May did say it would be wrong to describe the attack as “Islamic” extremism.

“It is Islamist terrorism,” she said. “It is a perversion of a great faith.”

Authorities conducted overnight raids in London and Birmingham, which led to seven or eight arrests. Some media outlets have reported seven arrests while others report eight took place. In Birmingham, located 126 miles north of London, police “raided a student flat” and arrested three people. The landlord of the apartment denied knowing who lived there and the agents did not release any information. Little is known about the other raids. But Acting deputy commissioner of the Metropolitan Police stressed that the attacker acted alone:

“It is still our belief, which continues to be borne out by our investigation, that this attacker acted alone yesterday and was inspired by international terrorism,” he said, adding that inquiries extended beyond London and Birmingham and more arrests were expected.

“To be explicit, at this stage, we have no specific information about further threats to the public. Clearly our investigation is ongoing, developing all the time, and is focused on his motivation, his preparation and associates.”

May Addressed Members of Parliament This Morning

May addressed Members of Parliament this morning, promising that the country “will never waver in the face of terrorism.” From the BBC:

“Yesterday an act of terrorism tried to silence our democracy, but today we meet as normal, as generations have done before us and as future generations will continue to do, to deliver a simple message: We are not afraid and our resolve will never waver in the face of terrorism.”

She told the MPs that the police and MI5 knew his identity and they believe he acted alone. She thanked friends from around the world, including President Donald Trump, for their kind words and support.

May also acknowledged and celebrated Foreign Officer minister Tobias Ellwood. He attempted “to save the life of PC [Keith] Palmer.” Ellwood gave Palmer CPR and tried to stop the blood flow from his knife wounds. Unfortunately, Palmer passed away.

Cochran and his wife Melissa were in London to celebrate their anniversary. Cochran worked as an engineer, but music remained his passion and owned a studio. Customers constantly flooded his studio’s Facebook page with excellent reviews. Melissa is in the hospital recovering from a broken leg and rib. His friend Shantell Payne left this message on Facebook:

“With a heavy heart I must pass the sad news of our beautiful brother, father, husband, son and friend Kurt Cochran.

“He could not overcome the injuries he received in the London terror attacks.

“This pain is so heart wrenching and raw it has rocked our family and all that knew him to its core.

“We will miss Kurt beyond words.

One victim of #Westminster attack named as Ayesha Frade, 43-year-old teacher on way to pick up her children from school. pic.twitter.com/Ni0aDwMJPy

Ayasha Frade, a married mother of two, had left her job at a college near the bridge. She taught Spanish and served as the department head. Principal Rachel Borland released this statement:

“We are all deeply shocked and saddened at the news that one of the victims yesterday was a member of our staff, Aysha Frade. All our thoughts and our deepest sympathies are with her family. We will be offering every support we can to them as they try to come to terms with their devastating loss.

“Aysha worked as a member of our administration team at the college. She was highly regarded and loved by our students and by her colleagues. She will be deeply missed by all of us.”

LIVE: A fund has been set up for hero cop Keith Palmer https://t.co/yc4wI5DVlI pic.twitter.com/gCLMRn16ac

Officer Keith Palmer worked for the department for 15 years after he served in the armed forces. Palmer attempted to stop the attacker from entering Parliament grounds, suffering from numerous knife wounds before armed police could shoot down the attacker.

Paying tribute to the officer, the Mayor of London Sadiq Khan said: “Keith Palmer was killed while bravely doing his duty – protecting our city and the heart of our democracy from those who want to destroy our way of life.

“My heart goes out to his family, friends and colleagues.

“He personifies the brave men and women of our police and emergency services who work around the clock to keep us safe – tonight all Londoners are grateful to them.”

“I’ve known Keith for 25 years. We served together in the Royal Artillery before he became a copper. A lovely man, a friend. I’m heartbroken,” Mr Cleverly said.

“My thoughts are with the family, friends and colleagues of PC Keith Palmer. A brave man.”

“He was someone who left for work today expecting to return home at the end of his shift – and he had every right to expect that would happen,” Mr Rowley said.

I will update this post as more information comes out.

Thank you, Mary Chastain, for an excellent post about a horrific event.

And special thanks for highlighting the victims of this terror plot. Too often these people are forgotten in the frenzied aftermath of criminal investigation.

On the other hand, I don’t care what the attacker’s name was or anything about him. As far as I’m concerned, three people were killed in this attack.

I’ll promote the Shariah
to help my career

even if others with their lives do pay

Unfortunately, the progs will never see as an appropriate response to such incidents allowing people to carry defensive weapons, even the police.

This is why we should do everything possible to keep Muslims outside our country.

A sad event. I pray for the dead and injured.
There is a lesson to be learned here. The Brits are defenseless, they cannot carry any kind of defensive tool, no gun, knife, stick, etc. To defend oneself with any tool remotely effective is illegal and is often prosecuted. A terrorist’s knife is readily available from his kitchen or corner store, and his car is always ready. The bad guys are armed, the populace is not, some police, prime targets, are not. Serving soldiers are not armed on the street.
Guns are readily available in the USA, and guns will be the terrorist’s choice when they ramp up their activity here. We will not be safe until 50% of our qualified citizens are armed during their normal activity.

“We are not afraid”.
Bet they would be if you take away the wall, fence and bodyguards.
I say let’s give it a try and see if these politicians scare. Let them run around as unprotected as regular Brits.

We are not afraid

Rubbish. They’re terrified. Terrified of being called “Islamophobic.” Terrified that they might be accused of rejecting the horrors of “multiculturism.” They’re more terrified of that than they are that some Muslim will come up and shove a knife through their viscera.

Obviously, they’re also out of their minds.

Europe won’t survive … because it doesn’t really want to.

This is like the guy driving over a cliff because his radio is too loud. The radio was not the cause of his death. He caused his own death. Theresa May and the other multiculturalists are the reason these people were killed. The man killed in the name of allah. What else can you call it but islamic terrorism? There are pols in the UK who are publicly stating that his religion has nothing to do with these deaths! WTF is wrong with these people?

unarmed policeman, that’s absurd. They won’t even trust their street coppers with guns. Maybe the coppers should do like the criminals and buy some illegally to protect themselves?

Quaint little historical note….in the 1800’s many British cops carried….not overtly. Britain was big into firearms until the monarchy was threatened in early 20th century. Wimbledon, Bisley and other major centers were shooting ranges. I think that the highest murder rate in London occurred around Shakespeare’s time….plenty of bare bodkins in those days.

And up to the very early 1900s, if a British policeman needed some firepower to deal with a transient crisis, he’d just ask if any bystanders had a revolver he could borrow. And they’d oblige.

The government didn’t begin disarming the public in earnest until about 1917, when they started to fret about revolutionary activity inspired by the success of those dastardly foreign Bolsheviks. East London and the docks were believed to be the danger point, but they couldn’t just disarm everyone there as that would be too obvious. So they did the same thing the US Congress did in 1968 to keep guns away from the Panthers, and put the squeeze on everybody.

They should be afraid, and they are, no matter what they say.

This murderer wasn’t an immigrant nor the son of immigrants. He was English-born, converted to Islam and became a radical while living in Saudi Arabia for several years.

“It is a perversion of a great faith”

Wherein Theresa May proves herself to be an idiot.