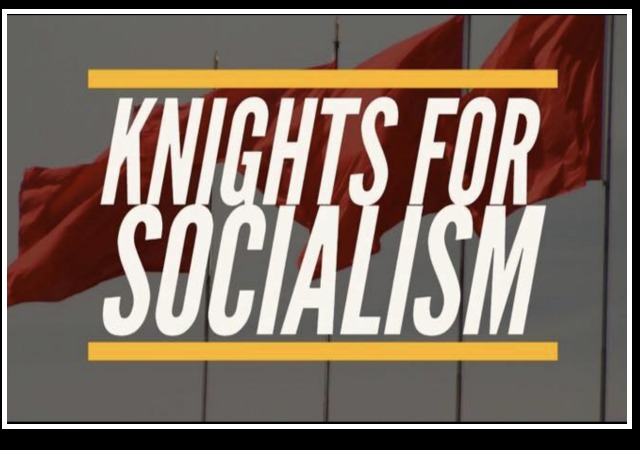 Publicly funded University of Central Florida has a “leftist fight club” that teaches progressives how to fight Republicans. This club, Knights for Socialism, is the only one like its kind that actually advocates violence:

“In response to the record number of hate crimes against Latinxs, Immigrants, Muslims, Women, the LGBTQIA+ community, Jews, African Americans and other minorities since the rise of Donald Trump and other Alt-Right Neo-Nazis, Knights for Socialism has decided to host a series of self-defense clinics for anyone that wants to learn how to BASH THE FASH,” asserts the Facebook event page for “Leftist Fight Club: The Rumbles at Lake Claire.”

Judicial Watch obtained records from the school, which says the administration has not formally approved the club and still reviewing the Knights for Socialism application:

Despite this, the club has a strong presence on social media. For the event “Leftist Fight Club: The Rumbles at Lake Claire” brought in an amateur boxer “to teach basic hand-to-hand combat techniques” as a way “help the socialist students better protect themselves from potential hate crimes performed by those sympathetic to ‘Donald Trump and other Alt-Right Neo-Nazis.'”

Campus Reform spoke with UCF College Republican Scott Benton, who stated that this desire to perform violence becomes “a natural consequence of the intellectual indefensibility of leftist beliefs.” He continued:

“If you can’t hang with someone on a debate stage, then you resort to other means to try and justify your cause.”

Parents and other students have demanded the school stop allowing this club on campus:

“I’m very disappointed that UCF has not had a reaction to that yet,” UCF College Republicans Chairwoman Karis Lockhart said by phone.

9 Investigates learned those feelings extend beyond campus. One parent wrote to admissions officials in an email that ‘if these students in this club are not expelled immediately, my son will be transferring to UF as soon as possible.’ Another man, claiming to be a student at the University of Alabama, threatened to bring a crowd to campus for a fight, writing ‘we will have ambulences (sic) on standby.’

“No one should be trying to incite violence, using force, in any way,” UCF student Stephen Rice said.

The club did not respond to Campus Reform, but they released a statement to WFTV:

“Knights for Socialism is committed to fighting for intersectional justice on campus and in the Orlando community. We stand with marginalized communities facing all kinds of persecution, whether it be because of their ethnicity, their immigration status, their gender, who they love, or the size of their income.

Knights for Socialism exists to bring together passionate students who want to take direct action to improve, protect, and serve their community.

In light of recent events on campus, around the state, and throughout the country, we’ve heard concerns from fellow colleagues who now don’t feel safe doing normal things like studying at the library. This past week, we held the first of many events geared towards improving students’ sense of safety on campus. While there was apparent controversy over the marketing for the event, we stand committed to building positive relationships with students of all ideologies. Last semester, we participated in a debate with campus libertarians, and we look forward to discussing and debating our ideas in the future.”

Please. They couldn’t move in the armor.

Or, Please don’t hit me with your purse.

Want to bet that the BLM types are the primary ‘knights’ in training.

I’m thinking that anybody who needs to join a “Socialist club” to learn how to “bash” anything isn’t really much of a “basher.”

Face it, it you’ve made it to college and aren’t an experienced fighter, the odds are overwhelmingly against your ever becoming one.

More likely, if you join a “bash the fash” club, is that you are a flaming pussy who better be careful he doesn’t get punched in the throat.

I believe the increase in violence against their list of the aggrieved exists only in the liberal echo chamber. All I have read about is violence committed by the left at Berkeley, NYU and Middlebury plus the anti-Semitic threats committed by a socialist reporter.

They need a better grasp of history. They show cartoon figures battling Nazis, who are National Socialists. Stalin was also a Socialist, leading the Union of Soviet Socialist Republics. Mao was also a Socialist. As I remember, their body counts for their genocide programs was Mao > Stalin > Hitler. But it is the high degree of control mandated by a Socialist government that makes it possible for a fascist dictator to take command.

The first rule of Leftist Fight Club is that you bring a high-capacity assault-style rifle when they bring a scalpel. The odds are still against your survival, but you do what you can to increase their opportunity cost.

Won’t shooting a black rifle give them PTSD like it did that macho journalist? Better they should just stick to swinging those pink purses and leave the black rifles to others. LOL!

The left has always been willing to use violence. The radical leftists of the 60’s through today, they know their cause is a loser.
With no option to convince people to change their beliefs the only alternative for them is violence.
They can acquire the power they crave no other way. One of the reasons untold millions have died by the hand of leftists is the willingness to to kill in the name of their cause. Make no mistake they’ll kill and send people to their deaths for power.
https://www.youtube.com/watch?v=XBtANp4IKVk

If the alumni don’t handle this, the Feds can.

I love how the university hides behind the fact that the club hasn’t been “sanctioned” or “approved” – yet.

The ignore the GORILLA in the room that these hate-filled, ignorant promoters of violence projecting their hate onto non-existent “enemies”…….

Wake UP UCF administrators!! They ARE the fascists you’ve been looking for!!!

They don’t seem to realize that Florida is a concealed carry state.

WTF happened to UCF? University of Cupcakes and Fruitcakes.

When this non-sense started I decided to take a peak at my home town of NYC. Sure enough the attacks have increased, but look at the victim group and take a wild guess who are the most likely perpetrators.

Of the 43 attacks, 24 were directed at Jews —three times as many as occurred last November. The number of bias incidents against Muslims doubled, from two to four as of yesterday. Boyce said the department has also seen an increase in hate incidents committed against whites and against members of the LGBTQ community. He compared the rash of recent attacks on Jews to a similar outbreak during Israel’s military campaign in the Gaza Strip in 2014, and argued that news events influence acts on the streets.
http://observer.com/2016/12/nypd-reports-huge-spike-in-hate-crimes-since-donald-trumps-election/

It’s all a deception, as is common practice with leftists. Their “self-defense clinics” are actually “how-to-attack clinics”, so the snowflakes might be able to mount a credible attack on the “fascists” at Trump rallies.

In other words, so they won’t get their asses kicked by middle aged Trump supporters.

The lefties are the fascists. Hillary’s “Stronger Together” is literally the core of fascism.

notamemberofanyorganizedpolicital in reply to NoFlow. | March 18, 2017 at 7:21 pm

Seriously sounds like one of Adolph Hitler’s slogans of the 1930’s.

“In response to the record number of hate crimes against Latinxs, Immigrants, Muslims, Women, the LGBTQIA+ community, Jews, African Americans and other minorities since the rise of Donald Trump and other Alt-Right Neo-Nazis…”

Have these clowns ever cited verified incidents to support their claims as listed above? I suspect not. Yawn. Moving on.

No, but they continuously assure each other that they are at risk because of the ‘resistance’. Brave resistance fighters that they are — in their Walter Mitty world.

Hey! Video game warriors are tough as nails. You seldom hear of one breaking a nail using the controller because they tough it out. They get their mommie to kiss it and make it well and then they are back into the game and working that controller like a real warrior. Tough as nails!

Degenerate bunch of cupcakes. Liberals lose because it’s what losers do. How about a “Fight for Your Right to be White” group. How would that go over? Any prof or admin associated with this should be publicly flogged. Losers.

One of my High School classmates is an Associate Vice President at CFU and believe me she is an unadulterated Socialist!

She had a photo of her shaking Bill Clinton’s hand at a CFU function. I asked her if it was the same hand that Bill Clinton used to diddle Monica Lewinsky…..she unfriended me on Facebook…LOL!

I wish a muthaf#@ka would.

What’s that sound socialists? That’s the slide being racked on a Glock 19.

There is nothing that comes out of the University of Central Florida that anyone need be concerned about.

either way, these people are dangerous and their handlers should be indicted for sedition.