Trump’s second pick for the position. 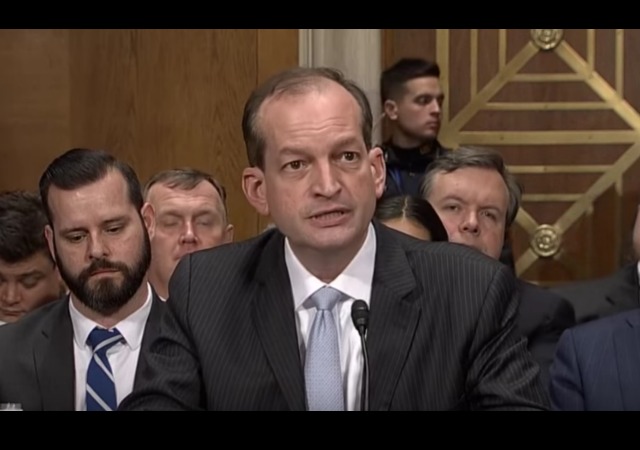 President Trump’s second pick for labor secretary, Alexander Acosta, faced the Senate Health, Education, Labor and Pensions Committee today for his confirmation hearing. The hearing lasted three hours. During that time, he defended his recorded as a United States attorney and promised to push back against Trump if he disagrees with the president:

“If confirmed, I will work to enforce the laws under the department’s jurisdiction fully and fairly,” Mr. Acosta said in his opening pitch to senators. “As a former prosecutor, I will always be on the side of the law and not any particular constituency.”

Committee Democrats hammered Acosta on past controversies, but he owned up to them and took responsibility. Sen. Patty Murray (D-WA) brought up a report from 2008 when he served as the head of the Justice Department’s Civil Rights Division, which stated that the “office had violated federal law and department policies by weighing political affiliations in hiring and assessing employees.” From The Hill:

“Do you take responsibility for the acts of discrimination that occurred under your leadership?” she asked.

Acosta defended the decision based on evidence since without the plea deal Epstein would not have faced jail time or be forced to sign up as a sexual offender.

Surprisingly, Acosta showed some “support for increasing the number of low-income workers who are paid overtime when they work more than 40 hours in a week.” He did not fully defend President Barack Obama’s revision to the rule, though.

Obama’s administration “raised the [overtime] threshold to $47,476” from $23,660. A federal judge in Texas stopped the rule from going into effect, but Democrats desperately wanted Acosta to defend it:

“Before that overtime rule, workers could be asked to put in extra hours — 60, 70, 80 hours a week — without earning a single extra dollar for the overtime hours they spent away from their families,” Sen. Patty Murray (D-Wash.) said at the hearing.

“Do you believe workers should be paid overtime for the overtime hours they work?” she asked.

Acosta refused to take the bait, suggesting that an overtime pay hike is due, at least to the point where it would cover inflation, but declining to uphold the limit set by the Obama administration.

“The world has gotten more expensive, and salaries have changed since 2004,” Acosta said.

“If you were to apply a straight inflation adjustment, I believe the figure if it were to be updated would be somewhere around $33,000, give or take,” he said.

Acosta also expressed some doubt over Trump’s plan to cut the Labor Department’s budget by 21% and that “he opposed across-the-board cuts as well as targeting specific programs.” He spoke about how he supports job training programs, “but a better effort must be made to align training with the skills demanded by employers.” From The Wall Street Journal:

One program he named as a model, Job Corps, provides those between 16 and 24 years old with free vocational training. Several senators, including Republicans, also spoke in favor of that program. Mr. Trump’s budget, released last week, would see centers closed and funding for other job-training programs reduced, thereby shifting responsibility for such services to state and local governments, and employers.

Mr. Acosta said he favors public-private partnership and said the department should work with local governments, businesses and educational institutions.

Sen. Patty Murray (D-WA) brought up a report from 2008 when he served as the head of the Justice Department’s Civil Rights Division, which stated that the “office had violated federal law and department policies by weighing political affiliations in hiring and assessing employees.”

Now there’s chutspah in action. J Christian Adams has documented in detail how every single new hire in the Holder era was a committed leftist; that doesn’t happen by accident. Undoubtedly much the same thing happened under Reno, leaving Acosta stuck dealing with actual commies and pinkos whom he couldn’t fire, and who would obstruct him at every turn. He shouldn’t have apologised; he should have pointed out the facts and pledged that if he encounters the same situation at Labor (which he probably will) he will clean house.