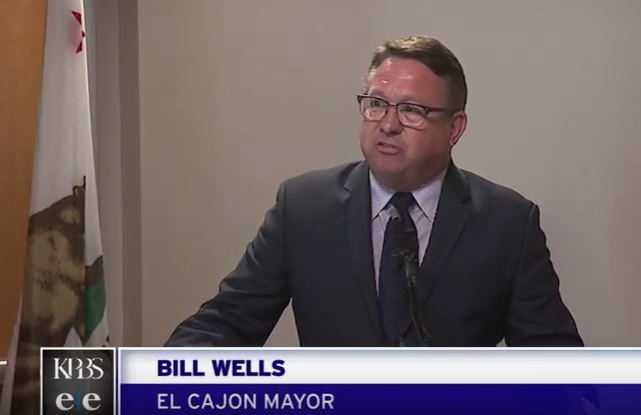 It probably comes as no surprise that California’s politicians are doubling down against President Trump’s immigration law enforcement policies.

State and local leaders in California struck a defiant tone Monday, saying they would continue to protect people in the country illegally despite an announcement by U.S. Atty. Gen. Jeff Sessions that the U.S. Department of Justice would soon cut federal grants from so-called sanctuary cities.

“Instead of making us safer, the Trump administration is spreading fear and promoting race-based scapegoating,” De León said in a statement. “Their gun-to-the-head method to force resistant cities and counties to participate in Trump’s inhumane and counterproductive mass-deportation is unconstitutional and will fail.”

But in a move that may shock many of our readers, these groups have now been joined by a team of mayors from California’s less glamorous cities:

A group of local elected officials from around San Diego County on Wednesday announced a new group they say will organize opposition to a bill in Sacramento to limit cooperation between local police and federal immigration authorities.

El Cajon Mayor Bill Wells called a press conference to announce the formation of the group, “Mayors for Safe Cities.” Members oppose SB 54, or the California Values Act, which is currently in the state legislature.

…Among the other elected officials at the press conference were Escondido Mayor Sam Abed, Poway Mayor Steve Vaus and San Marcos Mayor Jim Desmond. San Diego Mayor Kevin Faulconer, who is currently in Mexico City advocating for closer cross-border cooperation, has rejected the label of “sanctuary city” for San Diego, but supports some policies associated with the sanctuary city movement.

I am sure many in the Legal Insurrection audience are shocked that some of our elected leaders care more about their citizens and taxpayers than they do about progressive glory.

However, not all California’s mayors are on board with the “Safe Cities” model. California reporter and occasional Legal Insurrection contributor Katy Grimes reviewed Sacramento Mayor Darell Steinberg and his criticizing the Trump administration’s immigration policies and ICE’s deportation practices during a recent episode of  The John McGinness Show she guest hosted.

Elected officials in many communities have declared themselves sanctuaries for illegal immigrants, refusing to cooperate with federal immigration authorities, and 35% of Likely U.S. Voters favor the community they live in declaring itself a sanctuary community. The latest Rasmussen Reports national telephone and online survey finds that 52% oppose their community declaring itself a sanctuary for illegal immigrants.

It seems California may be more in-tune with the rest of the country than our leading politicians and the mainstream media would have you believe. Let’s hope that our “Safe City” mayors prevail in this battle.

Attorney General Session’s pronouncement that “sanctuary” cities will forfeit federal funds is not blackmail in the least. It is a simple statement of fact: If you want to flout the law, then don’t expect the rest of us to continue to support your endeavors.

As far as I’m concerned, every last red cent that goes to any sanctuary city for any purpose should be withdrawn.

Sessions’s announcement is not blackmail because it’s limited to the OJP grants, which are directly related to the topic of fed/local cooperation in law enforcement, which were conditioned from the beginning on such cooperation, and which cities can afford to do without if they really feel strongly about their sanctuary policies.

But the concept that funding cuts can amount to blackmail is absolutely true, and if a cut does reach that level it becomes unconstitutional. The criteria are as I listed them: if a cut is to existing ongoing funding that was not originally conditioned on cooperation with ICE; or if it’s not rationally related to such cooperation so that the cut is a form of punishment; or if the cut is so deep that the state is left with no choice but to comply with federal demands, then it’s unconstitutional. See South Dakota v Dole, a cut that did survive challenge, but the decision outlines what sort of cut would have been struck down.

Sessions only referred to DOJ Federal grants, which should be part of the discretionary spending. Other Federal Departments can do the same thing (ED, Energy, EPA, HHS, HUD, etc). Cutting off research funding from the CA universities would really hurt them, but I am sure that other states would appreciate the assistance.

One reason for citizens to object to the sanctuary city idea is that we hear about the multiple crimes committed by some of these characters and they get a light sentence or just get released.

If an American citizen drove without license, insurance, registration while under the influence (multiple times) and killed someone, that person would be in prison for a long time.

I saw a video recently with a black lady complaining about the illegals and how they were impacting the black community. She did not mince any words. I’ll post it here if I can find it again.

Found this via a search. It is from 2015, so someone was recirculating it yesterday. The transcript and the additional interview cited shows that the woman has a good point.

Here is the tweet I saw yesterday. The person mentions Trump and Sessions. I’ve seen it on several feeds, but this is the “original” posting.

Isn’t deLeon the crook who admitted that half his family is in the U.S. illegally? Why should anybody listen to him? And why does he think immigration enforcement is “race-based scapegoating”? The illegal aliens in the U.S. are of various races. Seems that deLeon is the real racist here, since he’s focused on only one race: his own.

He’s also the same guy who invented the term “ghost gun” — y’know, the kind that can shoot a “30-magazine-clip in half-a-second”.

He clearly has about the same level of understanding on both issues.

It seems strange that people get so upset about simply enforcing the existing laws. California politicians seem to uniformly oppose enforcing the law. If the law is so terrible, why not change it, instead of demanding that no one enforce it?

Notice they have not suggested that citizens ignore the California Income Tax laws.

Some laws are more equal than others.

It’s not about the feds enforcing the law, it’s about demands that state and local authorities help them do so. Nobody is preventing ICE from enforcing the law all it likes; but the constitution protects the right of state entities to refuse to do it themselves, to refuse to render ICE any assistance; and to prohibit all their subsidiaries and employees from doing so. This is a fundamental part of our system of state rights, going all the way back to Prigg v Pennsylvania, which said that states can’t ban non-state actors from enforcing federal law, but that they can ban state actors from doing so.

Good comments. But at least one CA judge thinks she can tell ICE how, when, and where they can enforce Federal law.
http://www.mercurynews.com/2017/03/16/california-judge-wants-end-to-immigration-arrests-in-courts/

Fair enough, but, let’s get real — this issue goes well beyond municipalities’ relationship vis-à-vis federal immigration law enforcement efforts. On a policy level, this is also about sundry cities actively encouraging illegal aliens to come, handing out driver’s licenses and official forms of identification to said aliens, dispensing all manner of entitlements; allowing aliens to enroll in school; in sum, a slew of calculated attempts by elected officials — who, ostensibly, have some sort of obligation to respect the laws that are the foundation of an ordered and civilized society — to encourage the flouting of federal law. Once can argue that, by these very actions, these municipalities are going well beyond the allegedly passive acts of non-enforcement that you describe.

Some California politicians are opposed to sanctuary cities and declaring the entire state a sanctuary? Wow! Rational politicos in CA … who’d a thought?

Also, a few days ago I tried to find a federal law that criminalizes the obstruction of federal law enforcement. It seems that except in certain limited cases, no such law criminalizing the obstruction of the execution of federal authority exists. Is it time to pass one and sign it into effect? If someone is aware of such a law, that could be brought to bear against named individuals in CA and under which they could be prosecuted, I’d like to learn of it.

CA is not obstructing the enforcement of federal law. No sanctuary city has ever prevented ICE from doing its job, and none plan to do so. They simply refuse to assist, and the constitution says they have the right to do that. Thus even if you were to find a law that says they must assist, that law would be invalid. States and their subsidiary entities have always had the right to passively resist federal law enforcement in this way; it’s how they were able to refuse to enforce the Fugitive Slave Act, Prohibition, and the Brady Act. If you cheered the sheriffs who stood on this principle against Brady in the ’90s, then it is hypocritical of you to condemn “sanctuary cities” who are doing the same thing.

In a normal world it would be insane enough for a state to declare that it was not going to obey whatever federal law it just did not like. So much for the claim that America is a nation of laws.If California is allowed to declare that it is not going to enforce immigration law, then what other law(s) will they refuse to enforce and what other states will follow their example? This is anarchy pure and simple.
>
But what makes all of this so utterly absurd is how they are violating the law trampling on the Constitution, and so forth for illegal aliens who themselves have broken the law, who themselves are not American citizens, and so forth. Why is it that an illegal alien in California can go to college there and pay in-state tuition while other Americans from other states (whose federal taxes help pay for all sorts of things in California) must pay out of state tuition? Why are they [providing illegal aliens so many other privileges such as the right to work, driver’s licenses, and so forth? LIkewise, why are they even automatically registering them to vote when they get their licenses thus enabling illegal aliens to violate voting laws (and likely even supporting them in their illegal voting)?
>
When did illegal aliens suddenly become a protected class of people that not only have more rights and privileges than American citizens, but are given repeated immunity from being prosecuted for breaking our laws including many that are far worse than entering the country illegally?