Immigrant Detained by ICE for Visa Overstay After Speaking Against Deportations

Immigrant Detained by ICE for Visa Overstay After Speaking Against Deportations

“You know who we are, you know what we’re here for” 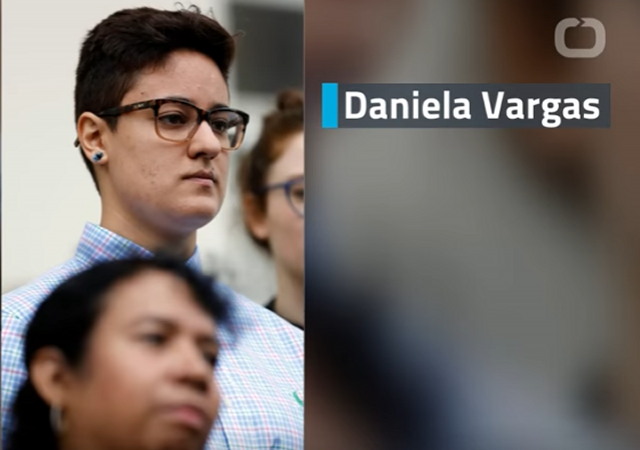 Daniela Vargas is a DREAMer in the United States under DACA. She recently participated in a press conference about the deportation of illegal immigrants. Moments after the event was over, she was in ICE custody.

Sarah Fowler of The Clarion-Ledger reported:

Moments after an immigrant spoke out about her fears of deportation, she was detained by Immigrations and Customs Enforcement.

Daniela Vargas, 22, was detained by ICE agents Wednesday morning, shortly after speaking at a news conference in downtown Jackson, according to her attorney, Abby Peterson.

The news conference was hosted by local immigration attorneys, churches and the Mississippi Immigrants Rights Alliance to bring attention to families impacted by deportation.

Vargas’ brother and father were detained outside their home by ICE agents in February. Vargas hid in the closet. When she was discovered by agents, she was temporarily handcuffed and then released.

Vargas was 7 years old when her family came to America from Argentina, placing her under the Deferred Action for Childhood Arrivals, or DACA, immigration policy. Under the policy, DACA recipients have to reapply every two years. Vargas’ DACA is expired but her renewal application is pending.

Peterson said she told agents via telephone Vargas had a pending DACA case.

However, agents reportedly told Peterson that Vargas was a “visa overstay” and will be detained.

Vargas has no bond and is in ICE detention.

Adolfo Flores of BuzzFeed has more:

Vargas’s attorney, Abigail Peterson, told BuzzFeed News that Vargas had filed to renew her Deferred Action for Childhood Arrivals status, which gives her protection from deportation, on Feb. 10, and so she was surprised she was detained.

“I don’t know if this is immigration showing us that DACA applicants are fair game until their DACA is approved,” Peterson said. “This seems to be the message we’re getting from this, which is surprising and not what I would’ve expected.”

In a statement, Thomas Byrd, a spokesperson for ICE, said Vargas was arrested “during a targeted immigration enforcement action in Jackson, Mississippi.”

“ICE does not conduct sweeps or raids that target aliens indiscriminately,” Byrd said…

Vargas’s friend told Peterson that ICE agents said, “You know who we are, you know what we’re here for” when they were pulled over.

Broadcasting your crime for the world to hear is a sure way to get arrested for it. At least in an Administration who values the rule of law. What did you expect would happen?

Maybe of Bernie Maydoff has spoken out in favour of pyramid schemes the media would have come out against his arrest?

Sorry – keyboard/ spellchecker issues:
Maybe if Bernie Madoff had spoken out in favour of pyramid schemes the media would have come out against his arrest?

Nice to see the law enforced.

The Left doesn’t understand why a “naturalization” process is necessary. This person ( ?she? ) couldn’t be botherd to even submitt the required paperwork on time for a VISA.

I would be very interested to find out if that entire family is on Welfare.

Her illegal alien parents had previously had brushes with ICE, nevertheless Daniela chose to both not renew her DACA paperwork in a timely fashion and go on TV.

Hey, if you have absolutely no respect for the (very generous) laws of the land, why is everyone so shocked that a violator was apprehended? Oy.

I hope they arrest that LA City Councilman that’s illegal if he still holds the post.

I am going to offer an alternative point of view about Dreamers that should be considered.

If a child was brought to the USA preschool age and then has gone through k-12 in the USA – we have invested approximately $150,000 in that child’s education. If we send them home – we have to write off that entire investment.

Conversely, every sweet little wide eyed immigrant child who is brought into this country will cost a minimum of $150,000 dollars just to educate. That does not take into account welfare transfer payments or police and internment costs if that child becomes a criminal alien.

So then we should get $150,000 worth of hard labor out of them before we deport them.

Even at $150,000 “investment” in the person, she didn’t learn enough to read her visa to note the expiration date.

Great. We can add “To avoid complying with the law, just drag your children over the border” to “To get access to free money, just give birth on our soil.”

What about all of the responsible parents who are patiently waiting in line and jumping through hoops to bring their families here LEGALLY?

What is it about NOT incentivizing illegal behavior that is so hard to understand?

For poor people from Mexico there is no line to stand in, and thus nobody patiently standing in it. The legal door is permanently shut.

I lived on the border for a long time – I know lots of folks who did their paperwork, stood in line and followed the rules. They’re the ones who get the most frustrated with all of the amnesty talk.

Sounds like this coalition of pro-illegal groups used her, to make her a victim. Her attorney should never have permitted this press conference while her DACA renewal was (she says) in process.

So if her lawyer actually *did* advise for her to hold a press conference to admit her illegal behavior, would that be grounds for the bar to smack said lawyer across the knuckles with a ruler?

I love how the democrats keep telling everyone that 98% of illegal aliens haven’t broken any laws!!! 🙂

Awe bless the precious morons…darlings…100% of illegal aliens have broken your countries laws!

And even if you go with their flawed logic, that would put the number of “criminal” illegal aliens at 220,000. That’s still pretty bad.

Yes dear, we know what you’re here for. You’re here because you believe that you have the right to willingly, knowingly violate our laws.

I still don’t have a problem with this.

What don’t people understand about “Illegal Alien”
If you are going to be brazen and flaunt our immigration laws
you will pay a price.

We now have a president who will enforce the immigration laws of our nation.

They do know the difference between an illegal and a legal immigrant. The left & media just prefer to use “immigrant” as an all-inclusive term to increase the size of the population.

They are trying to gain our sympathy for the illegal aliens since most of us do have an ancestor who come from another country.

What they don’t realize that our ancestors obeyed the laws at that time as well as learned English, became citizens, worked hard and assimilated into the American culture.

Even if she had renewed it on time, legally it would have made no difference. DACA is not a visa. It is not a permit to be in the US. All it is is a letter from ICE saying you’re not an enforcement priority and we’re too busy to deport you, so if you keep yourself off our radar we won’t be coming after you. It also promises employers that they won’t get in any kind of trouble for employing the person, even though it’s illegal. But by injecting herself into the debate and publicly bragging about her illegal status she put herself on ICE’s radar, and ICE somehow found the time to deal with her after all. She has only herself (and her lawyer, if she got advice) to blame for this.

If she was being deported to Venezuela I might feel bad for her. Since she would be sent to Argentina not so much…

Someone forgot to tell her that there’s a new sheriff in town and that instead of being given the grand prize of citizenship, she’s getting an all expense paid flight to Buenos Aires on ConAir.

It’ll be bummer if she already saw the inflight movie.