Who knew what and when did they know it? 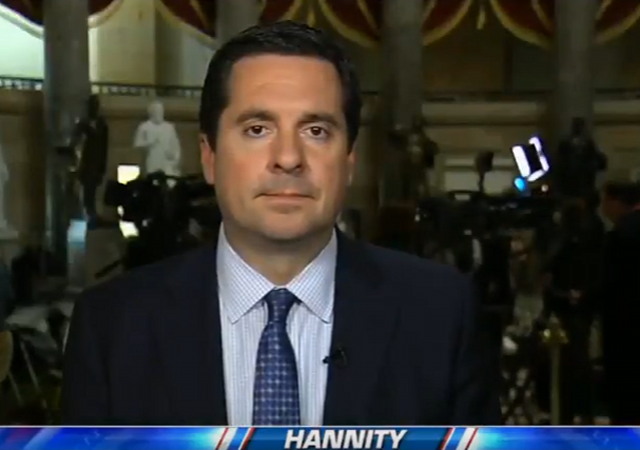 House Intelligence Committee Chairman Rep. Devin Nunes (R-CA) made headlines, when surprising everyone who was not him, just days after FBI Director Comey testified before Congress, he held a press conference to announce members of Trump’s transition team were “incidentally” surveilled and unmasked by the Obama administration.

Since making the initial claims, Nunes’ story has been dynamic and difficult to track. It’s also worth noting that Nunes was part of Trump’s White House transition team. (I imagine he saw his name in these mysterious intel briefings and wigged out. But that’s purely speculation.)

Now, Rep. Nunes claims he met with his inside source on White House grounds, the day before he made his announcement.

Comment from Chairman Nunes' spox about his whereabouts the day before his announcement Trump/associates may be swept up in surveillance pic.twitter.com/OZ06gSejbH

At the time of Rep. Nunes’ announcement last week, the White House claims they were surprised and were unaware of his findings.

“Someone who is cleared to share classified information with someone else and is cleared is not a leak,” Spicer said.

Trump’s press secretary, Sean Spicer, refused to rule out Monday whether Nunes’ source came from the White House but did say during the daily press briefing that “it doesn’t really pass the smell test.”

“I did not sit in on that briefing,” Spicer said. “I’m not — it just doesn’t — so I don’t know why he would brief the speaker and then come down here to brief us on something that we would have briefed him on. It doesn’t really seem to make a ton of sense. So I’m not aware of it, but it doesn’t really pass the smell test.”

Nunes said he was there for additional meetings “to confirm what I already knew” but said he wouldn’t comment further so as to not “compromise sources and methods.” A spokesman for Nunes said he “met with his source at the White House grounds in order to have proximity to a secure location where he could view the information provided by the source.”

A government official said Nunes was seen Tuesday night at the National Security Council offices of the Eisenhower building which, other than the White House Situation Room, is the main area on the complex to view classified information in a secure room.
The official said Nunes arrived and left alone.

Nunes also claims neither President Trump nor his staff was aware he was using secured White House grounds to view classified information.

Even if everything Nunes claims is true, it plays right into Democratic cries that Nunes is functioning as a White House tool to distract from the FBI’s investigation into whether Trump and his team colluded with Russia.

If the Russians helped keep me from living through another corrupt administration, Maybe I should send them a Dallas Cowboy cap and a thank you very much. I don’t see that having happened though.

And if the information was provided by a US intel source?

Nunes went to the White House to use the secure Intel room to review President Obama’s Daily Intelligence Briefings.

If unmasked information was in Obama’s dailies – this is much worse than we thought.

If my cow had balls, she’d be a bull.

With you liberals, it’s quite possible your aunt has balls.

Trey Gowdy said that Nunes behaved entirely properly. That his committee was charged with Russian/Campaign matters. This was a presidential surveillance matter and Nunes was correct to report to the President himself.

I’ve noticed more and more that the vast majority of the MSM scare stories are concerned primarily with trying to convince me to give a sh*t about something that I really don’t give a sh*t about.

notamemberofanyorganizedpolicital in reply to Tom Servo. | March 27, 2017 at 7:03 pm

So right you are Tom.

You can literally smell the “flop sweat” on the MSM over the airways and via cable as they realize they are totally…..
irrelevant…….

In the absence of any EVIDENCE that Nunes met with someone from the White House (instead of meeting with his non-White House source at the White House because it was the most convenient secure location with access to the necessary computer network that contained the information the source wanted to show Nunes), this is a non-story.

The meeting was not in the White House as the media implies, it was on the grounds. I am going to guess the Eisenhower Executive Building where State has a secured facility.

Failing to see anything scandalous here.

Nunes says he was aware of some of this information already. Is he referring to this?

“Someone who is cleared to share classified information with someone else and is cleared is not a leak,” Spicer said.

A person giving out information that HE/SHE IS NOT AUTHORIZED TO GIVE OUT is by definition “a leak” – even if the two parties hold appropriate clearance levels.

Spicer is a tool. And yes, to all of you, this is a non-story. Them MSM just wants to keep this story alive………..

Nunes visited the Eisenhower Executive Office Building (EEOB) building which is on the White House grounds. He did not visit the White House during this visit. This building contains a Sensitive Compartmented Information Facility (SCIF) in which you can look at certain classified information. Why would Nunes visit the specific SCIF as opposed to one in the Congress? Because much of the intelligence information is divided into compartments, or subsets. This is because all information is based upon “Need To Know”. Information in this SCIF had different information than the one in the Congress. Information that was being withheld from the House Intel Committee. The noose tightens on the Obama Administration.

Obama’s Presidential Daily Briefs. Someone ratted them out.

Since Obama only participated in a small percentage of the Daily Briefs, he can now still claim ignorance of it all.

https://www.youtube.com/watch?v=gapRNpEjXUo
Evelyn Farkas Says Obama Was Spying on Trump – MSNBC 3/27 3/28 … is there a connection