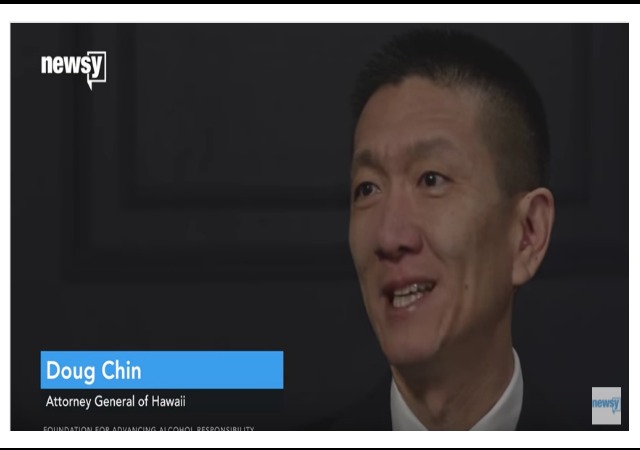 And there it is! Hawaii has become the first to file a lawsuit against President Donald Trump’s revised executive order on six nations. From The Hill:

“The Executive Order means that thousands of individuals across the United States and in Hawai‘i who have immediate family members living in the affected countries will now be unable to receive visits from those persons or to be reunited with them in the United States,” attorneys said in court filings.

“It means that universities, employers, and other institutions throughout the United States and in Hawaii will be unable to recruit or to welcome qualified individuals from the six designated countries. It threatens certain non-citizens within the United States and in Hawaii with the possibility that they will be unable to travel abroad and return—for instance, because their visa only permits them one entry, or because their visa will have expired during the time the Executive Order is still in place.”

The newest order exempts Iraq and those who already hold visas. It halts citizens from Iran, Libya, Somalia, Sudan, Syria, and Yemen from entering the country for 90 days. It will go into effect on March 16.

The new order only allows 50,000 admitted refugees. It also places Syria on the same level as everyone else while in the old order “indefinitely suspended the admission of Syrian refugees.”

Hawaii sued the Trump administration over the first order. The state wants the court to lift its old complaint and accept the amended one:

“To be sure, the new executive order covers fewer people than the old one,” Neal Katyal, one of the lead attorneys for Hawaii and former acting US solicitor general, explained in an interview with CNN. But in his view, the new travel ban still “suffers from the same constitutional and statutory defects.”

Ismail Elshikh, the imam of the Muslim Association of Hawaii, also joined the lawsuit. While he and his family are citizens of America, he complains that his mother-in-law in Syria cannot visit since she does not have a visa.

They insist this is a Muslim ban just because the countries have a dominant Muslim population. But the ban includes everyone: Muslim, Christian, Jewish, atheist, white, black, etc.

Others that filed complaints against the first order have not welcomed the new order, but only Hawaii has amended its complaint.

Both Hawaii and the Justice Department have jointly asked for the judge to approve a tight briefing schedule in order for the state’s request to be heard before the new executive order goes into effect on March 16. The court has not yet ruled on this joint request.

The Justice Department filed a flurry of notices in federal courts Monday — including in this Hawaii case — alerting the judges to the new order and arguing that the new order “falls outside of” injunctions that blocked the original ban. The government cited the significant changes to the new order, including the fact that it does not apply to green card holders or those with valid visas.

Attorney General Jeff Sessions has stated that the order does not violate any laws:

“(The order is) not any way targeted as a Muslim ban … we want to make sure everyone understands that,” an official told reporters.

“The Department of Justice believes that this executive order just as the first executive order is a lawful and proper exercise of presidential authority,” Sessions said.

Effectively Gawaii is arguing that everyone in the entire world has a RIGHT to enter the United States of America when ever THEY want?

I think this order is much more carefully drafted, and will prove durable.

lets see if scotus rulings on sb1070 hold up to scrutiny now…..

Fuck it, let Hawaii receive all the immigrants then ban travel from Hawaii. If at any time you travel to Hawaii you are not allowed to enter the continental US. Enjoy it Hawaii I’m sure Barry will be there to help you seeing as he’s a native son.

I said not standing ground on the first order was a mistake.

It DOESN’T MATTER how carefully Trump crafts it. The liberals are in full lawfare mode, and are going to find a biased, activist judge to strike it down and run to the idiots in the 9th Circuit to uphold it.

These people don’t care about the law, they only care about twisting it to suit their purposes, even if they have to outright ignore what laws actually say.

Headline hunting. He wants to be governor.

My God! It’s for 90 days! You would think that Trump was opening up internment camps. Oh wait, that was SuperDem FDR! All of these poor people who MAY want to visit during the 90-day window will just have to wait 91 days! Oh the horror. Are we not allowed to control who and when people come into our country? Is Hawaii now the ICE headquarters for all of the US? Trump needs to get this fast tracked to SCOTUS and stop this crap. Or if they want to allow the lawsuit to proceed, do so without a stay on the travel ban. To think that one little judge in one little state can stop the immigration policy of the US government is Ludacris!

Just how many Somali and Syrian MENSA candidates are we denying our prestigious universities?

Hawaii has an out of control homeless situation, I say we make all the Muslims enter through Hawaii and then find grounds to keep them there.

Are there any Alinsky tactics that can be taken against Hawaiian courts for frivolous actions?

The administration drafted a new EO which directly addresses the complaints put forth by the 9th DCA. As Hawaii is in the 9th DCA jurisdiction, this case will end up there, if a district court rules in favor of Hawaii. This would place the 9th DCA in a very interesting position. To do other than rule in the government’s favor, as the new order addresses the courts stated concerns, would make it seem reasonable that the court is basing its rulings on political and ideological grounds rather than on legal grounds. This would simply degrade the standing of the court further and open the door to the President ignoring the 9th DCA and going straight to the SCOTUS. If the court rules in favor of the administration, then they have to do so largely on the basis of existing statute, which strengthens the President’s powers and opens the door to further regulation of immigration based upon national security grounds.

For this fiscal year, Hawaii has admit only THREE refugees. And it is one case with three individuals.

You would think there would be some way the federal govt could just announce that the POTUS has the authority to decide who enters the US for nat sec reasons that the individual states have no standing to dispute it. Or at least put their bogus complaint on a mainline to the SC.

Fine. Choke on it, Hawaii. Every single damned visa appication needs to get dumped on the floor of the court at the start of every business day. They have to fish through and vet through every single one.

Since they’re so eager to usurp executive branch functions.

57 doesn’t seem to be working out.

We’re letting 50,000 (let me repeat: 50,000) alleged refugees from Muslim countries into the US? Gah, that’s insane. There must be a ton of jihadists in that bunch, and there’s no way in hell we can trust any Muslim government to vet anybody, they’re all allied with the jihadists (because Islam says they should).

Even if this were a Muslim ban, I’m not seeing the constitutional infirmity. Anything in the bill of rights surely only applies to persons under US jurisdiction, which foreign nationals residing in foreign countries assuredly are not.

Guess Hawaii has forgotten they are a State, not an independent country. Of course, I’m assuming 9th Circus is their court?

And why are we worred about North Korea dropping a few nuclear tipped missles on this liberal shithole?

Hell pull the military out and get it a nuclear enema. No golf course is worth this level of BS.