‘Dangerous’ standard to reveal ongoing investigations because the public is interested 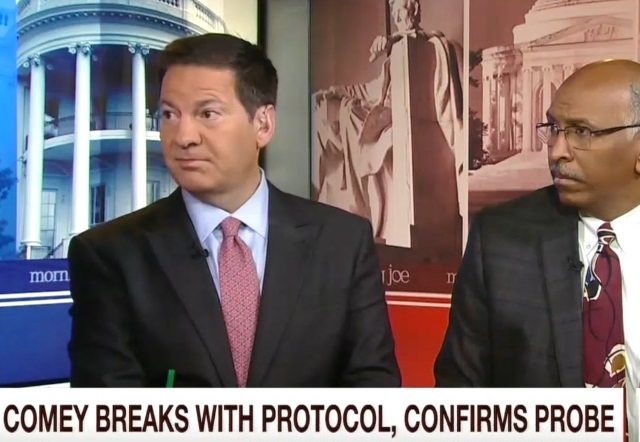 As the rest of the Morning Joe panel remained in three-alarm, apocalyptic mode this morning, there was one lonely voice bringing some balance to the discussion.

MSNBC analyst Mark Halperin said it was “completely improper” of FBI Director James Comey to have revealed the existence of an ongoing investigation into possible ties between the Trump campaign and Russia. Rejecting Mika Brzezinski’s suggestion that Comey was “compelled” to make the revelation, Halperin added that Comey “says the standard is, if the public is interested in something, I’ll reveal an ongoing probe. I’ve never heard of this standard. I think it’s a dangerous one to set.”

Joe Scarborough, in melodramatic fashion, held up the front pages of the New York Times and Washington Post, and claimed “Americans have a right to know that the sitting President of the United States is being investigated for colluding with the Russians!”

Two points here: contrary to Scarborough’s allegation and that of others in the MSM, neither Comey nor NSA Director Mike Rogers confirmed or denied that Trump himself was under investigation.

Second, what is the relevance of the front pages of the Times and WaPo? Does Joe think they set the rules for disclosure of FBI investigations?

if mslsd is on Obamacare, they certainly should apply for meds to help them over the next 4 yrs…

Think about what Comey said,”There is an investigation into the Russian hacks and the Trump campaign staff”! This is like saying you are under investigation but we don’t know much about it yet or even if it is important but your reputation is tarnished forever. If you wonder what this can do to a person watch the movie with Paul Newman and Sally Fields called “Absence of Malice”. In it, the old federal prosecutor, Wilford Brimley, tells the Miami office that they should have NEVER revealed that an investigation was ongoing because of the damage it could do to a person’s reputation. Maybe this fool Comey should go to the movies more often.

Comey revealed there was an investigation. But, when asked by Trey Gowdy if Obama had been briefed – Then he refused to answer.

If the standard is as Comey said, then why no serious investigation of Hillarys lies about Benghazi, her lies about email, her and others revealing sensitive information to outsiders (Sid Vicious), and WHY o WHY is his hair not on fire about the leaks now?

Comey is a bought and paid for Clinton tool!
IMO

Well it must be said , he did reveal Hillary’s investigation ,
but at least he had some finality to it , by saying he would not recommend prosecution .
Maybe if the Democrats could go a day or too without breaking multiple laws we could all catch up .

a total Non Sequitur as DoJ/FBI investigated Trump WITHOUT WIRETAPS.. which is just plain impossible. so someone’s lying @ DoJ/FBI/NSA/Federal.. (am not a Trump supporter btw)

This is a gross violation of Comey’s duty. We can only imagine the number of people every day that the FBI is investigating but never charge them with any crime. But to have your name appear on TV or in the msm as “Being investigated” by the FBI could be finacialy devastating or ruin your reputation forever. If you were in a business and needed outside financing or ran a company that had investors imagine what that would do those businesses. There is no reason for this.

I have a theory: Comey said it to keep his job. His claim makes it politically impossible for Trump to fire him since it would offer the appearance (bolstered by 24/7 media attacks) of being motivated by stopping the investigation, and Trump darn well should have fired him for his kid-gloves handling of Hillary Clinton. I’m not even convinced the investigation is real.