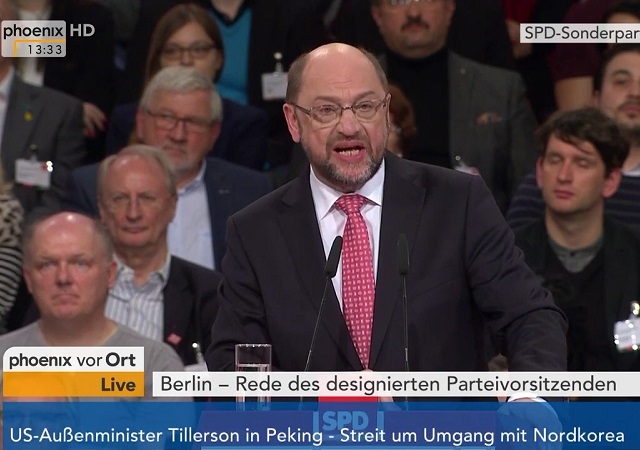 Schulz was speaking at the SPD party convention on Sunday that unanimously confirmed him as party’s Chancellor candidate. Long-time E.U. insider Schulz is running on the slogan “Make Europe[-an Union] Great Again”. He served from 2012 to 2017 as the President of E.U. Parliament.

Six months ahead of the September Bundestag elections, Merkel and Schulz are running neck-and-neck with slightly above 30 percentage points each. Anti-mass immigration party Alternative for Germany (AfD) remains a distance third with 11 percent.

[Martin Schulz] took potshots at US President Donald Trump, saying that an election like that in the United States featuring “fake news” and the “denigration of whole groups of the population” had “no place in Germany.”

“A German chancellor can take a clear negative position” toward the US, Schulz added later in his speech, after praising former SPD chancellor Gerhard Schröder’s refusal to back the US-led war in Iraq in 2003.

With illegal migrants continuing to pour in on Europe’s outer borders, and Germany still reeling under the Migrant Crisis that began one and a half year ago, Merkel’s CDU and main challenger SPD are desperately trying to divert voter attention away from the real issues.

Merkel’s Christian-Conservative CDU and Schulz’s Socialist SPD run the coalition government that presided over the self-inflicted Migrant Crisis and the resulting chaos. Both of these candidates firmly reject the idea of putting a cap on migrant intake purely on ideological grounds.

The political establishment in Berlin might not like to hear the truth about unregulated mass immigration, but the reality has a way of biting back. Crime statistics published today by German magazine Tichys Einblick, once again highlight country’s deteriorating law and order situation in the wake of unregulated mass migration:

Nationwide police crime statistics are expected to be released in May, however the statistics from the first three quarters of 2016 show a clear trend.

Whatever the European political elite may think of Trump’s plan of building a wall along the U.S-Mexico border, he, for one has a plan. European leadership neither has a plan nor the political willingness to secure Europe’s outer borders.

“Immigration is a privilege.” Trump reminded Merkel during their joint press conference last week, “Not a right, and the safety of our citizens must always come first.”

With both Merkel and her leftwing challenger committed to open borders, Germany is ominously steering Europe towards another disaster.

Video: Schulz vs. Merkel – What are the odds? Report by German broadcaster DW News:

Thirty one states. Louisville Convention Center was pretty well packed yesterday. At least compared to the Hillary venues of ten to thirty people. And the hundreds of reporters and other media types chasing the ‘Scooby Van’ around the tech school.
Watching the press types as they ran reminded you of Captain James Miller’s remark to Sgt Horvath in the movie “Saving Private Ryan”
“The way you run! I dont think so!”

Boo Freaking hoo. I could care less what the Social Democrat Party says. I think they are more screwed up than they think we are. But, the difference is – I won’t go out of my way to tell them how to run their country. They have no business telling US citizens how to run ours.

According to a German fellow I know, their culture retains a heavy bias towards stability and authority, despite the exorcism of its more violent expressions. Merkel’s failing in that regard, in that her attempts to stabilize the world have destabilized Germany. Shultz represents the ultimate project of German stabilization authority: the EU, Especially shoving migrants down the throats of their EU vassals, rather than crowding Germany itself.

This is very odd. It’s standard straw-man fluff, utterly inconsequential and not even original … but why is a German running on it?

Usually, the straw man, though a fictional construct, has some relevance to the event (argument, editorial, speech, election campaign, etc) involved. But ritual Trump-bashing? What’s the point? Is he trying to convince the German voter that he’s just a regular guy with stupid regular-guy opinions? If so, why not just talk about the weather? Or maybe rubbish the French or the Poles? That’s the sort of thing I’d expect Germans to “bond” over.

Mega-peculiar. Inexplicable flailing like this doesn’t make Schulz come across as a winner. Of course, his opponent Merkel has already demonstrated that she’s a loser. What a great election—a non-winner vs. a loser. Very much like what the GOP was trying to set up for the last election, with Jeb vs. Hillary.