“now I understand how this happened” 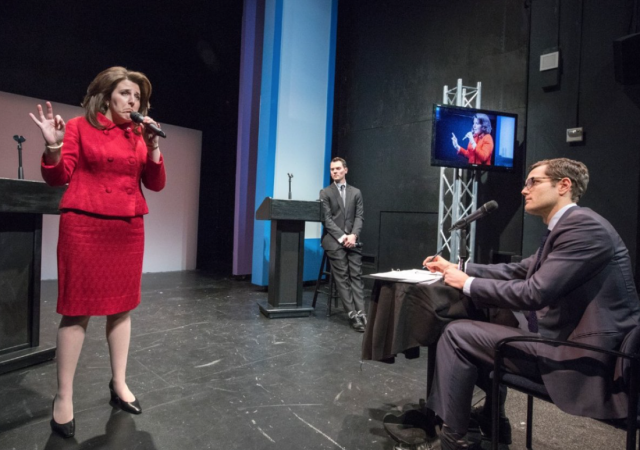 A fascinating study by an associate professor at NYU reveals why many voters found Trump the more appealing candidate.

Surely, perceptions would change with a gender-reversal, right? Perceptions did change, but not quite in the way they’d assumed.

Salvatore says he and Guadalupe began the project assuming that the gender inversion would confirm what they’d each suspected watching the real-life debates: that Trump’s aggression—his tendency to interrupt and attack—would never be tolerated in a woman, and that Clinton’s competence and preparedness would seem even more convincing coming from a man.

But the lessons about gender that emerged in rehearsal turned out to be much less tidy. What was Jonathan Gordon smiling about all the time? And didn’t he seem a little stiff, tethered to rehearsed statements at the podium, while Brenda King, plainspoken and confident, freely roamed the stage? Which one would audiences find more likeable?

Her Opponent sold out both of its scheduled performances as audience members attempted to understand how Trump won and Hillary lost.

Many were shocked to find that they couldn’t seem to find in Jonathan Gordon what they had admired in Hillary Clinton—or that Brenda King’s clever tactics seemed to shine in moments where they’d remembered Donald Trump flailing or lashing out. For those Clinton voters trying to make sense of the loss, it was by turns bewildering and instructive, raising as many questions about gender performance and effects of sexism as it answered.

For many audience members, the experience was an enlightening one. Now I understand why Trump won being a common sentiment:

We heard a lot of “now I understand how this happened”—meaning how Trump won the election. People got upset. There was a guy two rows in front of me who was literally holding his head in his hands, and the person with him was rubbing his back. The simplicity of Trump’s message became easier for people to hear when it was coming from a woman—that was a theme. One person said, “I’m just so struck by how precise Trump’s technique is.” Another—a musical theater composer, actually—said that Trump created “hummable lyrics,” while Clinton talked a lot, and everything she was was true and factual, but there was no “hook” to it. Another theme was about not liking either candidate—you know, “I wouldn’t vote for either one.” Someone said that Jonathan Gordon [the male Hillary Clinton] was “really punchable” because of all the smiling. And a lot of people were just very surprised by the way it upended their expectations about what they thought they would feel or experience. There was someone who described Brenda King [the female Donald Trump] as his Jewish aunt who would take care of him, even though he might not like his aunt. Someone else described her as the middle school principal who you don’t like, but you know is doing good things for you.

Most interesting is how this particular gender-reversal revealed so many unexpected biases. Trump has often been accused of sexism and of only caring about himself. He might be an ego-maniac, he might not, but the perception as someone who you might not like but is working in your best interest was really the bottom line for many-a-voter last November, and ultimately the reason Trump won.

Snippets from their rehearsal can be viewed beneath:

[Featured Image a photo by Richard Termine, as used in NYU’s publication]

Gosh I really enjoy watching this.

A despicable, corrupt, criminal whore would be likable than Hillary.

What this shows is that there’s actually a bias in favor of female candidates. What looked like bullying on Trump looked like mere impatience with prevarication on “King”, and what looked like looked like the phoniness it was on “Gordon”, looked like “competence and preparedness” on Clinton.

Watching that video, it looks like “Brenda King” (the Trump surrogate) is getting justifiably impatient with being ignored — which would be unacceptable from a gentleman — and “Sec. Jonathon Gordon” (the Hillary character) comes off as severely condescending and emotionless.

In both reality and the gender-reversed re-enactment, the Trump character was presented as the underdog — constantly having to cut in and ask the same questions three or four times just to be heard, and still not getting any answers — against Clinton’s established power-base.

It was like watching (mostly) likable Luke Skywalker lead those scrappy-but-relatable rebels against the established might of the Empire and the aloof and cold-hearted Emperor.

And we all know how Americans love an underdog.

There’s an interesting book on this (the love of the underdog) called “Underdogma” that I highly recommend.

So liberals prove, once again, that they’re the ones who hold gender stereotypes, and that their preconceived notions are wrong.

Will they learn anything from this exercise? No.

What would be really fun is watching them try this with the Palin-Biden debate to discover why us misogynist conservatives were willing to vote for Palin, a woman!

I think this shows a lot of people do not pay attention when they are watching TV, and take their cues from subsequent descriptions in the media or conversations with their compatriots. They do not remember what they saw or heard, they remember what they were told about it. When they paid money to engage in An Experiment, they actual sat still, watched, and listened.

I was astounded during this campaign at the number of times I would contrast words and tone on video with what was written about them. The ragged buzz of cognitive dissonance was a continual irritation.

I noticed that, too. One possibility that came to my mind was this: The people writing articles on the debates, didn’t actually watch the debates.

They may have gotten transcripts — so they can accurately report what was said — and they may themselves may be repeating what they were told about it. The overall level of disconnect between what actually happened and the reports published about it, raise serious suspicions that the reporters simply don’t know what they’re talking about, possibly because they didn’t watch.

Or maybe they’re so consumed by The Narrative (TM) that everything they saw was distorted by that lens. That’s another possibility I can’t rule out (and they’re not mutually exclusive; it could be both).

Others have also exposed this phenomenon — Jimmy Kimmel did a man-on-the-street bit where he read exact quotes from Trump but attributed them to Hillary. Almost every Hillary supporter agreed wholeheartedly with every statement (from the man they call Hitler). The moral of the story is that for liberals, it is the messenger that matters, not the message.

… but only as long as the messenger is a Republican.

The democrats still haven’t put together a message. They are buffaloed because has all the popular policies.

I don’t know tons of things about Trump but what I do know I know he is a pompous ass. He is a braggart and he is uncouth but he is what he is and he doesn’t try to hide it and he has made a lot of money. hillary, on the other hand, is a lying, self-centered, greedy politician who cannot show any emotion but disdain and a fake smile. From an informational/factual approach, hillary won hands down but the thought of having that voice and face on the TV every night made her impossible to vote for. The other vote killer is her past. She’s a congenital liar as William Safire of the NYT once said about her. Knowing she would be sitting in the Oval office making self-serving decisions every day was also a vote killer.

“From an informational/factual approach, Hillary won hands down . . .”

That may have had something to do with the fact that Hillary had an advantage that Trump didn’t have: Hillary knew the questions in advance.

He’s not a pompous ass. He is more quiet and moderate that many Democrats. The reportage, however, to support your point does exist. The thing is, they put words and tone in his mouth that diverges from what actually happened.

From an informational/factual approach, hillary won hands down

inspectorudy, those two sentences do not seem to go together.

I would agree but since most of us know what I meant it explains itself. I meant that she has the experience and the insider’s view of the government and knows the data that goes with it. Usually, she did not lie when delivering facts on specific government programs. She was a capital liar when talking about herself or things that she did that were under investigation or attack such as Benghazi or her e-mail. If you go back and read some of her speeches you will see that she gets the numbers right but omits or hides the results.

“Congenital” does not mean “consistent”. If she were under some compulsion to lie all the time that would be as useful as her telling the truth all the time. We would just know that whatever she said she meant the opposite. The problem is that she lies sparingly, only where achieving her goals reuires it.

They go together fine. Consider:

There are three kinds of mistruths: lies, damn lies, and statistics.

What “facts” were Hillary hammering while up on stage? Statistics.

As my stats teacher said, the numbers never lie, but stats constantly get misrepresented. It is almost painfully easy to get existing statistics to say whatever you want them to say, and even easier when you can write your own poll questions to generate whatever response you need.

And if all else fails, your average Joe American doesn’t have the resources or desire to spend time fact-checking.

All those things considered, every time she (or any other politician) talks statistics, I see red flags. Hillary’s “facts” may or may not be 100% true, but regardless, the way she was using them was intended to promote a false narrative … which is still a lie.

These people will do anything to try to turn off regular Trump voters. You know, these people.

I find it sad that they had to do this to figure out why Hillary lost and Trump won.

All of the above was obvious to me, although I would not agree AT ALL with those saying Hillary was factually correct or speaking truth.

As a non-Trumper, there was still no choice – the Shrillary would have been a nightmare.

Given how the post election political theater has gone what with those melting down at Trump’s victory, Schumer’s universal statement of “No!!!” no matter what Trump proposes or how badly the public demands it, and so forth, can anyone begin to wonder what it would have been like if Hillary would have won? Terrifying indeed.

This was fascinating! It’s even easier to see, with this experiment, that Donald Trump had a policy message, and Hillary just had platitudes and attacks on Trump’s character.

I am an uneducated and retired steelworker. Looks, gender, parties had nothing to do with my supporting Trump. It was issues. Pure and simple. I knew Hillary would take us down the same path as Obama with him and Valerie pulling the strings and Hillary as their puppet. Sex pervert in Chief providing comic relief in the background to the tune of Arkansas Traveler.