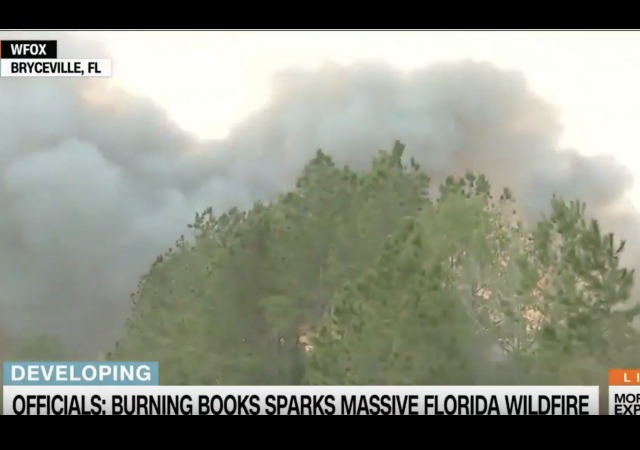 FLORIDA MAN! Officials have contained a massive wildfire by 85% in Bryceville, located 20 miles west of Jacksonville, that destroyed two homes. A man caused the 693-acre fire when he decided to burn some books:

The blaze started on Wednesday afternoon after the unidentified man burned books and magazines outside his home near Bryceville, about 20 miles west of Jacksonville, Florida Forest Service spokeswoman Annaleasa Winter told Reuters by telephone.

It is against Florida law to burn household garbage.

Dusty winds blew paper away from the initial burn site, Winter said. Firefighters initially were able to contain about five acres of flames, but strong winds caused the inferno to spiral out of control.

“What happened next was we had 40 to 50 miles-per-hour gusts of winds, and it pushed the embers right outside of the fire line and it just ran through a very dense forest and threatened many homes,” Winter said. “At least two homes are lost.”

The man accused of starting the fire was cited for an illegal burn but not charged with a crime, she said.

“This was not malicious,” Winter said. “But he will be liable for the cost of fighting the fire and any damage done.”

Those were some expensive books.

Why not donate them to a thrift store? Moron.