Brussels-based central military command to be operational within months 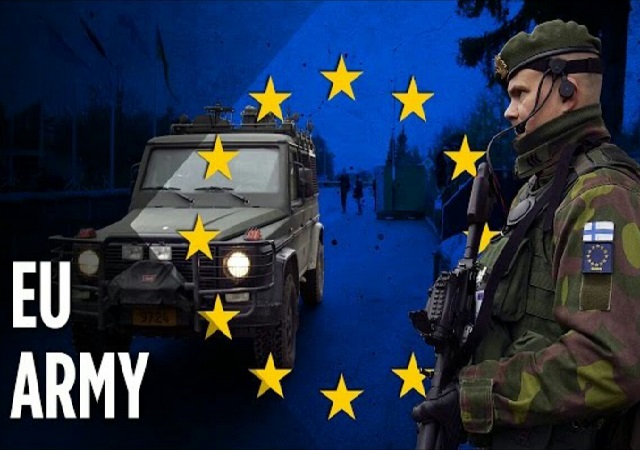 ‘Never believe anything until it has been officially denied,’ they use to say in days of the Soviet Union. Today, the same is apparently true for the European Union. After years of official denials, E.U. has announced its plans to build a unified military command in the Belgian city of Brussels — a move set to take NATO’s European partners away from the existing transatlantic alliance. Germany’s state-run ARD broadcaster called it an “attempt to transform European Union into a real defense union”.

Just last year in the run-up to the Brexit vote, U.K.’s Deputy Prime Minister and pro-E.U. campaigner Nick Clegg blasted U.K. Independence Party’s (UKIP) leader Nigel Farage for misleading the voters on the issue of a proposed E.U. Army ahead of the referendum, saying Farage was spreading a ‘dangerous fantasy that is simply not true.’ That ‘dangerous fantasy’ is now coming true.

The German media coverage tried to paint Brexit vote and the election of President Trump as the triggers for this sudden pan-E.U. military consolidation, but the facts of the ground tell a very different story. As early as May 2016, NATO officials were accusing France of neglecting its commitment to NATO by diverting resources to build an E.U. Army. To counterweight Germany’s influence within the E.U., France was positioning itself to play a greater role in a future E.U. Army.

Germany is equally hawkish on building E.U.’s military muscle. Last month, Roderich Kiesewetter, a leading German MP from Chancellor Merkel CDU party, called for a “European nuclear deterrence” which would rely on British and French nuclear arsenal, and be bankrolled by Germany.

Berthold Kohler, the editor of Germany’s leading newspaper ‘Frankfurter Allgemeine Zeitung’ went even further and asked Germany to build its own nuclear arsenal as President Trump’s election victory has casted “doubts over America’s nuclear guaranty” and the “French and the British arsenal were too weak at this point “.

E.U.’s foreign and defense ministers have given a go ahead for setting up a military headquarter for the Union. In future the operations will be coordinated from Brussels. (…)

“In my opinion the common security and defense policy is an area that can unify the European Union,” says CDU’s [Germany’s Christian Democratic Union party] E.U. defense expert Michael Gahler. In other areas — such as the question of refugees — we are divided. (…)

The new headquarter for the E.U.’s foreign military missions is a visible sign of an attempt to transform European Union into a real ‘defense union’. The command centre in Brussels is expected to be operational within months and would initially be dealing with EU’s military training missions abroad. These missions include Mali, Somalia and Central Africa. [Author’s translation]

Armed with nukes or not, German military, or Bundeswehr, has bigger short-term problems at hand. Bundeswehr is running short on fresh recruits since Merkel government abolished the general conscription 6 years ago. Now Merkel government wants to open up the army for non-Germans in order to deal with this immediate shortfall, a move bitterly opposed be Germany’s military high-command.

If the intent behind ending the conscription was to lift the standard of the Bundeswehr, German government has glaringly missed the target.

Since 2007, German Military Intelligence has investigated more than 300 active duty soldiers on suspicions of having Islamist links. So far, nearly 30 former Bundeswehr soldiers are known to be fighting within the ranks of ISIS in Syria and Iraq. Currently, over 60 active duty soldiers were under investigation for having Jihadi connection. In April 2014, German newspaper Handelsblatt reported that until recently German army did not carry out backgrounds checks on soldiers handling sensitive combat equipment. The screening was only limited to soldiers accessing classified material.

If Europe’s demographic trends keep going south and the Islamist infiltration of their armies carries on, Europeans might have to worry about their own conventional and nuclear arsenal than any threat from the outside.

Nothing startling here. The goal of the EU was to create a political entity in Europe similar to the modern USA, where member states are subservient to the central “government”. The EU has been engaged in consolidating that power for the last few years. It started in the economic sphere and now, with Brexit being a done deal and more …exit movements gaining steam and Trump demanding that NATO members pay their fair share of NATO costs, the EU has rolled out its military plan early.

Make no mistake, an EU military is designed solely to control the member states of the EU. It would eliminate the most effective military partner in the European defense scheme the US. It is simply another step in European empire building. And, it ignores the hard learned truism that you never allow a German to have a gun and an open border.

No worries the EU army won’t fight anyone except unarmed citizens of the EU member states who need retraining and Re-education.

they had one before. based in berlin.didn’t work out so well.

I wonder when Operation Barbarossa begins.

Let’s weaponize the EU and then hand it over to the Jihadis. Not necessarily in that order.

Now, what would they be doing with a “European” army? Certainly not defending Europe from Russia—that won’t pass the giggle test. And not defending Europe from the Islamic invasion—they’ll never even consider doing that. All I can see is that it will allow the country which dominates the new army (and guess which country that will be … no, not Belgium) to maintain the sham unity of Europe, and maintain it by force. And that would be necessary because European finances and Liberal insistence on surrender to medieval Islam will be driving its constituent components—specifically, all of eastern Europe—away.

The eternal menaces threatening eastern Europe are Russia, Germany, and one or another Caliphate. (The other historical menaces, Christian sectarianism and the Mongol hordes, are both dormant … at least for now.)

The attempt by eastern Europe to align itself with the West after the dissolution of the Soviet Union was motivated by economics and by the prospective need for defense against Russia, which, post-USSR, could be expected to revert to its old status; that is, being a traditional Great Power menace to its neighbors. However, Western alignment brings its own menaces and vulnerabilities. The menace is, as always (at least since 1870), Germany. The vulnerability is rampant Liberalism. Whatever its local virtues may or may not be, Liberalism’s geopolitical consequences for any country are spiraling domestic debt, catastrophic drop in birth rate, and ineffective military defense.

In other words … alliance with the terminally Liberal countries of western Europe is of limited use against Russia … but it’s of no use at all against Islam. And eastern Europe has been fighting Muslim invasions for far longer than it’s been resisting Russian ones.

In view of western Europe’s abject failure to counter the Islamic menace, eastern Europe must realign itself with … Russia. Russia is suffering from Liberalism too, but the decay doesn’t seem to have spread nearly so far (yet), and the Russians are not yet totally castrated.

Domination by Russia, or the Caliphate? Not an attractive choice, but still an easy one; eastern Europe knows how bad the Russians can be, but at least huge crowds of Russians don’t run around raping their women. (Which is why I believe future historians will date the death of historical Europe to New Year’s Eve 2015-2016; a new Sarajevo, a century later.)

Expect Russian influence over eastern Europe to increase dramatically over the next few years, as western Europe is submerged under foreign invasion, and emasculating, self-destructive Liberalism is erased by outright medievalism.

Of course, this will all be blamed on Trump. But Europe’s failures are home-grown. And I don’t see a play-Euro army stopping European dissolution, even with Germans calling the shots.

Scary stuff. Say goodbye to national sovereignty. The U.K. needs to trigger Brexit immediately. The only things that might be able to stop this is Le Pen and Wilders winning and Merkel losing their respective elections.

If Heinz Guderian had been an accountant…..

It would appear that France and Germany learned a lot from Rome.
If you want to be destroyed hire foreign mercenaries as your army.

Let’s consider the basics: what will be the common language of this military? It won’t be German due to the implications. It won’t be Dutch. French? Can you see a German soldier being ordered around in French? That Monty Python sketch writes itself.

As said by another comment-maker: I see the only purpose of this EU military being to keep other member states exiting the union. The question is when there will be another European land war. Not if. A second question: does America expend blood and treasure yet again to get involved?

Would Italians of any rank take orders from anyone at all???

Whatever they build is going to be the proverbial Glass Cannon.

Good. Now our troops can come home and NATO be dissolved.

just think, the enemy would not have to defeat each country they can all surrender at once. how well did the armies do at the beginning of WWII. they had to opportunity to stop the war before it began in Europe, but they choose not to. does’t do any good if you have an army if you are not going to use it to defend yourself.

I can easily see the EU army being used to suppress dissent against the Muslim invasion. If things get really bad, and as things stand I’d say that’s inevitable, I’d expect the EU army to be used to protect Muslims against righteous retaliation.