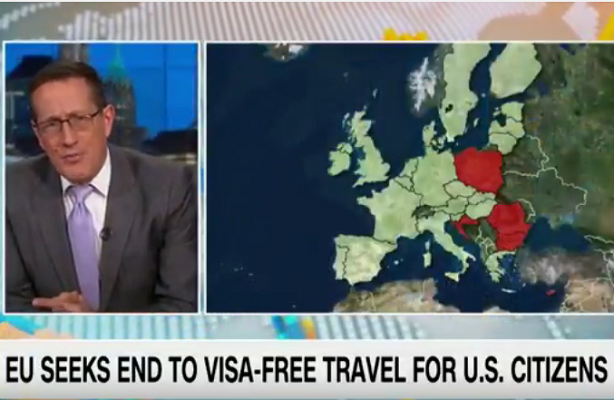 The Obama administration refused to grant visa-free travel to the U. S. from five EU countries:  Bulgaria, Croatia, Cyprus, Poland, and Romania.  The EU Parliament has been protesting that decision since at least 2014 and had been putting pressure on the Obama administration to relent; however, no progress was made.

Now that President Trump is in office, however, the EU Parliament has decided that it’s time to step up the pressure on the Trump administration regarding the long-standing lack of “visa reciprocity” and to propose (threaten?) the end to visa-free travel to all EU countries for U. S. citizens.

In what has been called a “visa war,” the European Union’s parliament on Thursday called on the bloc to force American tourists visiting Europe to first obtain visas because the U.S. excludes five EU countries from its no-visa policy.

The Wall Street Journal reported that the request is unlikely to change policy, but reflects “hostility among some European politicians to the Trump administration.”

U.S. citizens can travel to all EU countries without visas but the U.S. hasn’t granted visa-free travel to citizens of Bulgaria, Croatia, Cyprus, Poland and Romania.

. . . .  The legislature urged the European Commission to act within two months. The Commission was legally bound to propose by last April that visas be reintroduced for U.S. citizens for 12 months but the 28-nation bloc’s member countries preferred to take no action.

The Commission has cautioned that suspending the visa waiver for Americans would also hurt trade, tourism and the European economy.

The EU Parliament, citing its success in getting Canada to change its policy about visa reciprocity with Bulgaria and Romania, seems to believe this threat will be the impetus President Trump needs to reverse a policy that even the Obama administration recognized as necessary.

Dimitris Avramopoulos, the European home-affairs commissioner, traveled to Washington last month to talk about the issue. He wrote to The Journal: “As you know, our approach brought results with Canada. We will continue our engagement with the United States on this matter as well our broader cooperation on migration and security.”

He was referring to Canada’s decision to lift all remaining visa requirements for EU citizens by the end of the year.

Adding visa hoop-jumping to the increasingly unattractive prospect of vacationing in a Europe swarming with potentially-violent refugees and terrorists doesn’t seem like a great idea.  Indeed, the non-binding resolution appears to be a ploy rather than an actual move to impose visa requirements on U. S. citizens traveling to Europe.

The European Parliament called on the EU executive on Thursday to force Americans to apply for visas before visiting Europe this summer, stepping up pressure to resolve a long-running transatlantic dispute on the issue.

. . . . The European Commission stressed it was pursuing a diplomatic resolution to the row, leaving it unlikely that it would act on the vote by lawmakers setting a May deadline to impose visas – a move that could hurt Europe’s tourism sector.

. . . . Commission officials noted a planned EU-U.S. ministerial meeting on June 15 to try and resolve the issue, which has been running since 2014. The EU executive already allowed a deadline for a solution to pass nearly a year ago, without taking action.

. . . .  A Commission official said contacts are ongoing with the U.S. administration “to push for full visa reciprocity,” but fell short of saying that immediate action would be taken.

Former Communist countries Poland, Croatia, Bulgaria and Romania, as well as the Mediterranean island of Cyprus, have been calling on Brussels to end U.S. discrimination against their citizens.

But the economic cost of imposing visa restrictions on the millions of American tourists and business travelers who visit Europe each year is a major disincentive.

In other words, Americans wishing to travel to Europe need not worry about needing a visa for the foreseeable future.

That would be a really foolish thing for the EU to do. Tourism is a big chunk of the economy in a number of EU countries and a lot of that tourism comes from the US.

This must have progressed from Clinton’s war on Christians in Serbia and the Obama/Western-backed coup in Ukraine.

That’s what I noticed also…….

My wife and I must be the cultural barbarians many Europeans have always claimed U.S. citizens to be. We have absolutely no interest in visiting a continent overflowing with Islamic Supremacists who have sworn to wipe our country, culture, and people from the face of the Earth. We will keep our travel money here at home; there is a lot here we have yet to see. Why go to a bunch of countries occupying a combined land mass that would fit neatly into the central U.S.?

And the problem with that is?
Who cares?

Since most of us in “flyover country” take a European vacation only once or twice (at most) in our lives, getting a visa is all just part of the advanced prep for “The Trip”. We are unlikely to spontaneously decide to fly to Paris for the weekend. “Jet Setters” (and others with larger quantities of “disposable income”) might be inconvenienced, but for the vast majority of this country it is a non-issue (or so it seems to me from out here in the sticks).

Hey, EU, assuming the Obama administration had a legitimate reason, perhaps it would make more sense for you to do something to correct the problem on your end?

Or, is it all about your obvious dislike of President Trump?

This is simply the EU government trying to strengthen their sovereignty over all of Europe. It is trying to establish a USE, United States of Europe; which would be considered a single nation. And, the US should not have to pay for that at the expense of the security of its citizens at home.

The fact is that surrendering the security of your nation to outsiders, especially in regard to vetting the people who you allow to enter your country, is stupid. Undesirables exist in every country. And, most countries do not want criminals and other undesirables entering to prey upon their citizens. The nations of the EU have a big problem right now, because certain members have very lax or nonexistent standards for allowing immigrants into their country. Once inside the boundaries of a member country of the EU, that immigrant, or anyone else, is free to travel throughout the EU without restriction. And this causes serious problems.

Good luck EU, you’re gonna need it. The Cave-mander in chief was your best bet.

If the EU acts to require a visa from US, we should stop discriminating and require one from ALL EU countries. Problem solved!

On no! I must get a visa to see how badly the Musloids have trashed Paree?

Fat chance in hell. Tit for tat. If the EU wants visas it’s fine by me. Recipocrity. We’ll see who laughs last.

Visa free travel is always a bad idea. We should know who is coming to our country. Other nation’s have that right too.