The ban must apply to all political, religious beliefs. 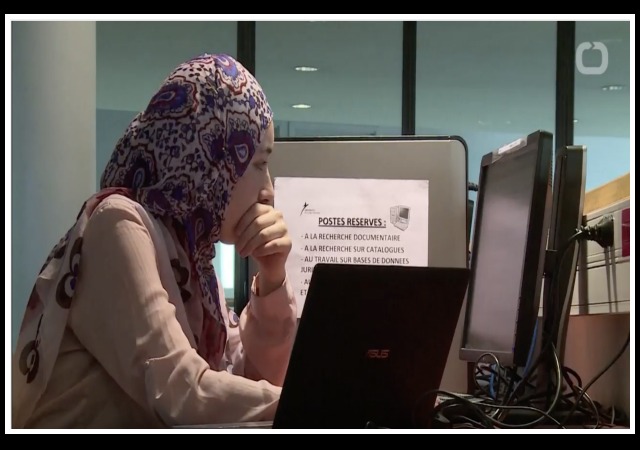 The top European Union court has ruled that employers can ban the Islamic headscarf from the workplace. From the BBC:

The European Court of Justice (ECJ), ruled on Tuesday morning that employers are allowed to ban workers from the “visible wearing of any political, philosophical or religious sign” including headscarves.

The ruling was prompted by the case of a receptionist who was fired from security company G4S in Belgium for wearing a headscarf to work.

However, the court said “the ban must be based on internal company rules requiring all employees to ‘dress neutrally.'”

The private businesses can ban religious, political, and philosophical symbols as long as the ban applies “to all religious and political beliefs.” From Fox News:

In this case, the ECJ ruled that companies should be allowed to have policies banning the wearing of religious or political symbols.

“The court of justice finds that G4S’s internal rule refers to the wearing of visible signs of political, philosophical or religious beliefs and therefore covers any manifestation of such beliefs without distinction. The rule thus treats all employees to the undertaking in the same way, notably by requiring them, generally and without any differentiation, to dress neutrally,” the court said in a statement.

Samira Achbita sued when G4S fired her in 2006, claiming religious discrimination. But when hired, the security firm had an “unwritten rule” about no religious symbols in the workplace.

G4S has since written in the rule into its regulations.

The ban does not apply to customer complaints:

“The willingness of an employer to take account of the wishes of a customer no longer to have the services of that employer provided by a worker wearing an Islamic headscarf cannot be considered a genuine and determining occupational requirement,” the court said.

That ruling came from a case in France. Asma Bougnaoui lost her job at the Micropole firm after a customer complained about her headscarf.

The EU court said that a court in France will “have to determine whether the company in this case had dismissed Ms Bougnaoui solely to satisfy a customer or in accordance with a wider internal prohibition on religious symbols.”

This means employees would be prohibited from wearing something such as a cross or crucifix necklace.

No, it means it can’t be displayed openly.

Wearing it under your shirt ought to be fine – nobody knows what it is but you.

Hanging a cross on the wall would definitely be a no go.

Visible wearing of any political, philosophical or religious sign. So if you any of those on a chain inside your shirt and it can’t be seen then your fine.

Yes, exactly. The employer would have to make no exceptions. In the US such a blanket employer policy would be illegal, but a policy that applies only when the company is actually losing business because of the affected employee’s practises, which the EU court banned, would be allowed.

“The law requires an employer or other covered entity to reasonably accommodate an employee’s religious beliefs or practices, unless doing so would cause more than a minimal burden on the operations of the employer’s business. This means an employer may be required to make reasonable adjustments to the work environment that will allow an employee to practice his or her religion.”

Banning religion in the public square. That is what many of our ancestors left Europe to get away from.

I don’t favor this. There may be some circumstances, say, manufacturing processes, where a headscarf might be a safety risk. In general, though, suppressing yarmulkes, headscarves, Sikh turbans, and crosses serves only to push religion farther out of public expression to no good purpose.

I absolutely favor banning the niqab, the face covering. That’s a different matter.

You are mistaken if you think that the hijab is the same as a yarmulke. Yes, they are both religious items worn on the head. The hijab however is a hateful garment that casts aspersions on all the nearby women who are considered to be of low morals because they are not ‘virtuous’.

The hijab is a lot closer to the hood of the KKK which is similarly intended to intimidate and demean others — not bring the wearer closer to God as a yarmulke is intended to. Big, big difference.

Oh, I’m not arguing in favor of the hijab. I know Muslim women who are appalled by its return, when their mothers fought so hard against it. But are you willing, for instance, to tell Mennonite or Amish ladies that they can’t wear their lace caps, or Orthodox Jewish ladies that they cannot wear their wigs? I am not Muslim, so my opinion of the hijab is not really the question.

The EU wants to ban head scarves. But they continue to let Muslim refugees commit crimes and destroy life in their nations. Somehow, I think life and way of life are more important than headscarves. Do I hear an amen?