CNN’s Cuomo: “no, proof, no regrets: they only go together with this administration”

CNN’s Cuomo: “no, proof, no regrets: they only go together with this administration”

What about the Obama administration? 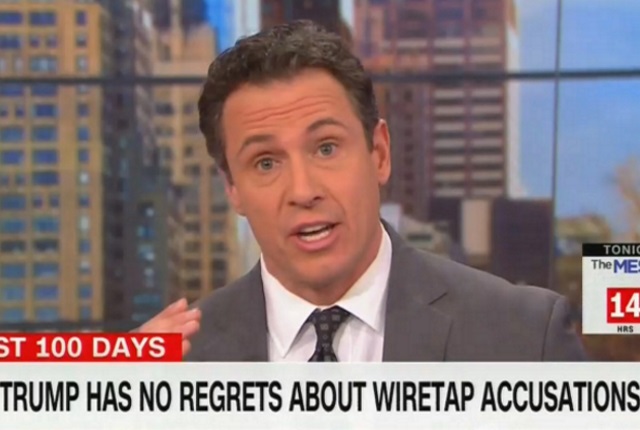 On CNN this morning, commenting on a report that President Trump has “no proof, no regrets” over his allegation that Pres. Obama wiretapped Trump Tower, Chris Cuomo claimed “no, proof, no regrets: they only go together with this administration.”

Really? We only have to go back to the immediately previous administration to debunk Cuomo’s claim. Remember President Obama’s “proof and regrets” that a video led to the murder of four Americans in Benghazi? Nope? How about “if you like your policy, you can keep your policy?” Or when he told the press on national television the Cambridge police “acted stupidly” at a Harvard professor’s home? Remember President Obama’s “proof and regrets” over that? Neither do we.

Either Chris Cuomo has a bad case of short-term memory loss, or more likely, CNN is all-in on its policy of trolling the Trump administration, criticism of the network’s blatant bias be damned.

CHRIS CUOMO: There’s a sharp focus right now on [President Trump’s] credibility because of the continuing fallout from the president’s stunning accusation that President Obama had his tower, Trump Tower headquarters, wiretapped during the investigation. There’s no proof of that presented by the president. Republican lawmakers charged with investigating the claim say they’ve seen no evidence of this as yet but that investigation’s just getting going. The White House insists that the president has no regrets. CNN’s Joe Johns live at the White House with more. No proof, no regrets. They only go together with this administration.

He works at CNN, odds are against him being a real journalist.

Oh no! Is this what we get when there are no womyn? I don’t know how long I can take it. LOL! Cue up Satchmo..
https://www.youtube.com/watch?v=m5TwT69i1lU

I rarely watch CNN so I honestly don’t know the answer – is Cuomo supposed to be a straight news anchor or more of an opinion commentator? He certainly produces opinion sound bites with “no proof, no regrets” almost daily.

Good question. According to his official CNN entry, “Chris Cuomo is a CNN anchor and reports on major events and breaking news.”

That would seem to imply that he is a straight news guy. But at CNN, looks like he’s “anchoring” their anti-Trump crusade.

I’m more convinced with every report like this that Zucker (right name?) is banking on the deliberate feud. It appears to be his prime strategy to increase revenues regardless of the change in perception. They still lag MSNBC considerably, however. Guess there is only so much of a rabid anti-Trump audience for cable news.

Is he an anchor in the nautical sense? Anchors are pretty dumb and suspended on the end of a chain.

Where did the details on Flynn’s conversations come from?

Why did the MSM feverishly report last summer about the supposed Trump server link to a Russian bank?

Where was this MSM excitement when Obama was promising “flexibility” while abandoning our allies and Hillary was lining her pockets while approving massive Uranium asset sales to Russian businesses?

BUT this is how it works. Claims Trump is owned by the Russians are accepted and pushed as FACT in spite of there being NO evidence what so ever.

Claims made by Trump about being tapped and these are reported by the media as having no evidence.

This is the way its going to be for the next 8 years!

It’s the mailman’s fault. Had the communication not taken place on naked woman postcards no one would have been the wiser, but we all know how those post office people read postcards…..especially those with a near naked woman on them. Say, could the Marine Corps be involved? They have been passing those pictures around and maybe, just maybe some poor L/Cpl didn’t have a picture to pass around and used a naked woman postcard. It will be a crying shame if Mattis doesn’t find that L/Cpl and promote him to E-4 because he has the making of a member of the E-4 Mafia.

I apologize if I take cnn to seriously, but obviously naked women were involved and we all need to get out there and march with the womyn to stop this unnatural desire of young alpha males to ogle women.

I’m beginning to feel my lips again…..where is my tequila?

“no, proof, no regrets: they only go together with this administration.”

Among the lefty criticisms of Trump on the wiretapping imbroglio:

1. Trump has no evidence.

2. Trump is clueless. This was long ago reported in the media, so how can he only now be learning of this.

So–MSM news reports are evidence of nothing? Couldn’t have said it better myself.

Isn’t this the same liberal idiot that thinks it is ok that a grown man who thinks he is a woman should be able to,expose himself to 12 year old girls in locker rooms?

Chris Como supports the left and has been anti-Trump from the very beginning of Trumps run for the presidency. He has a double standard for Trump and for the left. Trump/republicans are put under strict scrutiny and anyone else one not so much.

Mailman describe exactly what will happen for the next 8 years.

This type of blatant hypocrisy is one of the reasons why the MSM ranks below lawyers and used car dealers in veracity, in the perception of the public. Even after the liberal drone indoctrination which has been going on for 100 years, most Americans recognize hypocrisy and dishonesty. And, the behavior of the MSM only reinforces the appearance of either dishonesty or delusion on their part.

Thank you MSM, for destroying yourselves, live, on the air [and in print].

Aren’t they just below pedophiles?

Uh huh, and for the past 8 years there has been no proof and no regrets from President TeeTime and every word he spoke was revered as if they were read from the Sacred Scrolls…so sod-off!

Got rid of cable TV 4 or 5 years ago. Reading about Prissy Chrissy, is to me – proof that I have no regrets in cancelling.