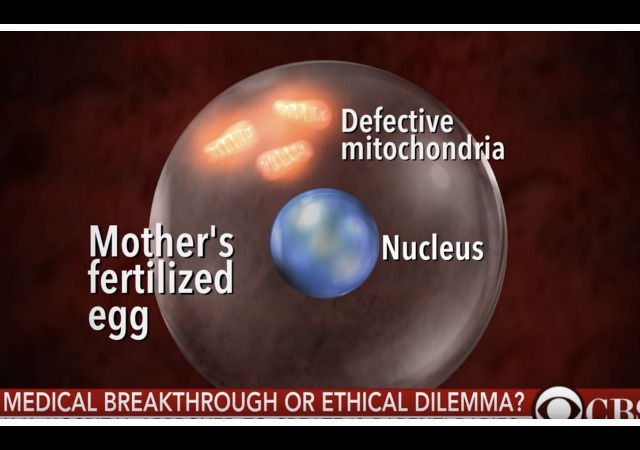 This story makes this famous saying come to mind: “Just because you can, doesn’t mean you should.” The U.K.’s fertility regulator granted permission to Newcastle University to develop a baby from the DNA of three people. Scientists claim this procedure could stop the mother “from passing on potentially fatal genetic diseases to their children.”

In this case, the scientists will use the procedure “to fix problems linked to mitochondria, the energy-producing structures outside a cell’s nucleus.” This condition can cause muscular dystrophy and organ failure. The Chicago Tribune reported:

To help keep women with mitochondria problems from passing them on to their children, scientists remove the nucleus DNA from the egg of a prospective mother and insert it into a donor egg from which the donor DNA has been removed. This can happen before or after fertilization. The resulting embryo ends up with nucleus DNA from its parents but mitochondrial DNA from a donor. The DNA from the donor amounts to less than 1 percent of the resulting embryo’s genes.

The license granted to Newcastle University relates only to the clinic’s capacity to perform the techniques, Britain’s fertility regulator said. The clinic must apply for each individual patient to be treated and no patient application has yet been approved.

Last year, U.S.-based doctors announced they had created the world’s first baby using such techniques, after traveling to Mexico to perform the procedure, which has not been approved in the United States.

Critics have raised concerns about the treatment, saying it will put people at unnecessary risk of an untested procedure. Some say women with faulty mitochondria should choose simply to use egg donors and that using the new techniques will open the door to genetically modified “designer babies.”

I’m sure these kids will be well rounded and not have any health problems that taxpayers get stuck paying for.

Odd. I would think they would put some of the mitochondria from a donor in the mother’s egg, rather than putting the mother’s nucleus in the donor egg.

The way they’re doing it makes as much sense as taking the engine and running gear out of car A and putting the whole bundle in car B because car A’s tires are flat.

Or, the Chicago Tribune has absolutely no idea of what this procedure is, and reports accordingly. As this is true about any scientific topic, it’s probably the likely explanation.

It’s highly likely that it is the latter explanation. I’ve found that the Press has an attention span which is measured in 15-second soundbites.

Trying to explain any process which can’t be broken down to that level is lost on them, because that’s the frame of reference within which they HAVE to think in order to communicate ANYTHING to their audience.

That being said, the exchange of a nucleus in a cell is easier than attempting to exchange the Mitochondria alone. You would have to REMOVE all the prior Mitochondria from the defective cell FIRST, then replace it with the “donor” Mitochondria. If you MISS some, you defeat the purpose of doing it in the first place. Exchanging the Nucleus is a “One-vs-Many” approach.

Also, you’re not always exactly sure what ELSE you’re getting if you’re exchanging OTHER things in the cell, and you might end up getting mixed Mitochondria or something else undesirable from the “donor” cell (leading to a “chimera”).

The “nucleus” removal technique is reasonably perfected, straight-forward, and accomplishes the goal (getting the preferred Nucleus DNA into a package that doesn’t have a defect.

Stay tuned for more updates on these developments from
Frankenfurter Inc.

All this hand-wringing about “designer babies” is the uneducated masses having a collective fainting attack about a procedure they don’t understand.

It was the same with “cloning” a few years back when the “cloned” dolly the sheep. The problem is that people who don’t have an extensive background in genetics or biochemistry don’t understand the DIFFICULTY of doing this in any reasonable or efficient manner.

Yes, you can transfer the Nucleus of the cell. That just means you get what that Nucleus was designed to create. That’s not a “designer” baby. It’s the same platform with a different instructions. To use a car analogy, it’s putting the blueprint for a Dodge Charger into a Chrysler 300 (*google “twinned vehicles” if you don’t understand this reference, they’re effectively the same car).

To create a truly “designer” baby, you would have to get into the Nucleus ITSELF, find the particular DNA section governing the specific trait you want to modify AND THEN modify it by altering or wholly replacing that DNA section with a section from an individual with the trait you want to replicate. That’s ALSO making the assumption that the DNA section sequence you’re attempting to modify doesn’t interact in some way with OTHER sections that you DON’T want to modify.

Further, this isn’t a “one-off” procedure, where you would have one Nucleus, in one fertilized egg, that you’re manipulating. The failure rate of getting the right gene-sequence to change, without changing anything you DON’T want to change, that you would likely need to attempt it HUNDREDS, if not THOUSANDS of times to get the outcome you want from the manipulation.

Might we SOMEDAY get to “designer babies?” Maybe. And I’m not that fussed about it, once we can. When we get to the point where we can “fix” an individual fertilized egg or early embryo, think of what we can accomplish with a certain amount of “tweaking” and then think of what we can accomplish as a SPECIES. Increased intelligence for the ENTIRE populace. Faster progress. An end to Genetic Disease.

It’s vain, but possibly personal cell/organ regulation (imagine being able to change hair/nail/eye color by taking a supplement). Advanced learning potential (pill to learn a language or skill by mapping the brain-neuron structure and being able to tell the brain to replicate it chemically).

But, NONE of that is where we are NOW. Might this open the door to some or all of the above? Maybe in 50+ years.

I’ll wait for my flying car and vacation home on the Moon colony first. Those dreams are closer.