THE DONALD, HE MADE ME EAT PANCAKES 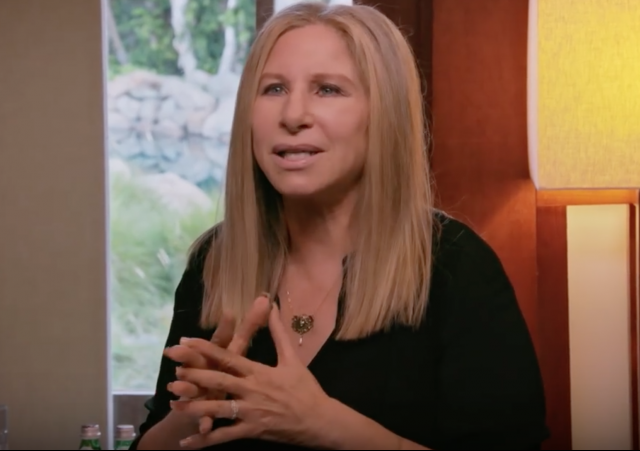 Trump has been accused of many things — some deserved, some not. But this has to be a new one.

Barbara Streisand recently blamed Trump for her decision to over-indulge in pancakes. Trump acts, Barbara eats. Or at least that’s the impression her Twitter feed gives:

Donald Trump is making me gain weight. I start the day with liquids, but after the morning news, I eat pancakes smothered in maple syrup!

And the recent accusations that Obama was Nixon-lite? MORE PANCAKES.

As the Hollywood Reporter pointed out, Streisand is no fan of Trump:

The performer has made it clear in the past that she is not a supporter of Trump. Streisand penned an essay for The Huffington Post titled “Clueless, Reckless, Graceless, Mindless and Heartless: Our President Elect,” where she expressed that Trump is “dangerous and unfit for office.”

After Meryl Streep’s anti-Trump Golden Globes speech, Streisand called into MSNBC’s Hardball With Chris Matthews while getting her teeth cleaned and said she agreed with Streep. “You can’t trust anything he says,” the singer added about Trump.

All a joke? Probably. I love Streisand as an actress and performer. She’s immensely talented. These days it’s far too difficult to discern sarcasm, parody, and comedy from reality. But I’m so old I remembered being labeled a “racist” by Hollywood types for questioning some of President Obama’s decisions.

I think it’s safe to say the new president has become a whipping boy for every insecurity harbored by his detractors. It’s the natural progression of the victimhood culture.

Relatedly, anyone else suddenly wanting pancakes?

If Trump is really successful… we’ll see Babs at McDonald’s super-sizing it.

anyone else catch she drinks her breakfast??

It is a lot like the famous question, “does this dress make me look fat?” Sorry, it is not the dress.

No, your fat HEAD makes you look fat!!!

When too much fat accumulates in the brain … it really shows.

“How to Serve Barbara” is a cookbook.

What’s worse, she’s now too fat to move to Canada as she said she would. Canada has strict immigration controls. Or was it Australia? Maybe Australia accepts fat refugees.

Nobody tells her how many calories are in her vodka, er, liquid diet?

And notice she’s afraid to admit it’s vodka. Russia and all that.

Hey Babs! It’s o.k.! They make vodka is Poland so you’re off the hook!

Babs, one would think that you had learned how to adult by now. Nobody is responsible for the bending of your elbow other than you yourself. If the morning news is “making” you eat pancakes. maybe you should stop watching the news . . . .

while you pack your bags for the move to Canada that you promised!

Tell me the truth; does this president make me look fat?

Says the woman for whom the Streisand Effect is named.

She’s going to be one fat bitch before this is over!

Going to be? Hell, she went to seed decades ago!

Did you or did you not eat the pancakes with maple syrup, butter or substitute, and other concentrated carbohydrates?

That said, the incredible, edible egg… in moderation, of course. With a side of green, maybe not clean, vegetables.

…illustrating the basic problem with Leftists…the failure to accept responsibility for one’s own actions.

Should have used the picture of a bunny with a pancake on it’s head Kemberlee.

Personally, I’d be happy if she just choked on a pancake.

Oh good, then the lunatics would want to outlaw pancakes.

While I am wary of quotes that do not quote in the age of post-normal journalism, was it Donald J. Trump, President, Donald Trump, transgender SNL actor, or Donald Trump, figment of your imagination, that “made me eat pancakes… making me gain weight”?

Can’t wait till she’s too fat to speak.

Slap some duct tape across that big trap Babs, you can fix anything with duct tape.

Trump makes her fat but it’s being a liberal/progressive that makes her stupid.

Too bad she is not phat