The prayers do not violate the First Amendment. 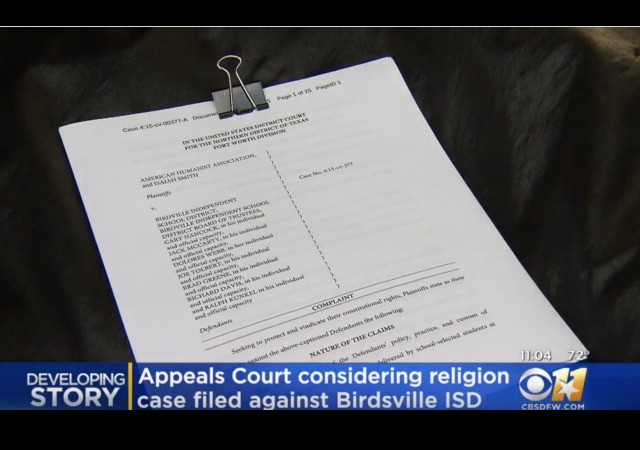 Back in 2015, the American Humanist Association (AHA) sued the Birdville School District, located near Fort Worth, TX, because school board members started their meetings with a prayer. The AHA said this violated the First Amendment “through its practicing of promoting Christian prayers.”

Former student Isaiah Smith brought the case to AHA and claimed “the prayers made him feel unwelcome at the public meetings and that the school board endorsed Christianity.”

On Monday, the 5th U.S. Circuit Court of Appeals decided that the “school board may open its meetings with student-led prayers without violating the U.S. Constitution.” From Reuters:

Writing for the appeals court, Circuit Judge Jerry Smith said the matter involved legislative prayer, because a school board was “more like a legislature” than a classroom.

“Most attendees at school-board meetings, including Smith, are mature adults,” and even board members’ “polite” requests that the audience stands during invocations “do not coerce prayer,” Smith wrote.

The school board has opened with prayers since 1997, which take place in an elementary or middle school.

AHA lawyer Monica Miller and Smith will review “their options, including asking the entire New Orleans-based appeals court to review the case.” However, the ruling satisfied the defendants:

D. Craig Wood, a lawyer for the defendants, said his clients were happy with the decision.

“The decision is reassuring because these trustees are elected and serve without compensation, and the possibility that they might be personally liable for damages would be somewhat daunting,” Wood said in an interview.

The next greatest liberal cause should be to ban taxes, which, in reality, are paid for with money and some of that money has mention of “In God We Trust”.

Having “In God We Trust” on the money must be why libs like to spend it so freely. That and drug dealers don’t take plastic.