Controversies have reportedly worn him down. 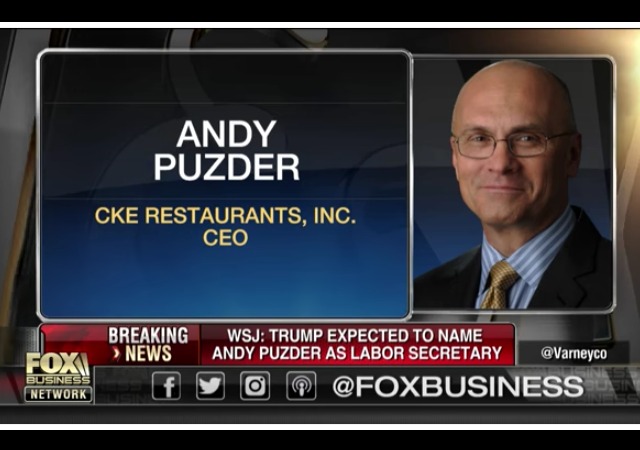 The Associated Press has reported that Andrew Puzder has withdrawn as Labor Secretary nominee. He has released this statement:

“After careful consideration and discussions with my family, I am withdrawing my nomination for Secretary of Labor,” he said in the statement.

“I am honored to have been considered by President Donald Trump to lead the Department of Labor and put America’s workers and businesses back on a path to sustainable prosperity. I want to thank President Trump for his nomination. I also thank my family and my many supporters – employees, businesses, friends and people who have voiced their praise and hopeful optimism for the policies and new thinking I would have brought to America as Secretary of Labor.”

Twitter and the media lit up this afternoon over rumors that Puzder would withdraw his nomination for Labor Secretary. From Fox News:

Puzder was scheduled to appear before the Senate Health, Education, Labor and Pensions Committee for a hearing on Thursday. Sources told Fox News he is expected to either withdraw his nomination, or have it withdrawn by the White House.

In recent days, Puzder’s high-profile divorce including past abuse allegations from his ex-wife; revelations that his family had hired an undocumented immigrant as their housekeeper; and his business background have cast a harsh spotlight on the nominee.

His ex-wife has retracted her allegations, but the issue has hung over his nomination.

Politico published an Oprah clip of 1990 of Puzder’s ex-wife when she made allegations of spousal abuse. But not so surprisingly, the headline didn’t include her admitting she used those allegations for her advantage:

During the episode, titled “High Class Battered Women,” Lisa Fierstein, Puzder’s ex-wife, said he told her, “I will see you in the gutter. This will never be over. You will pay for this.” Fierstein also said she called the police on him.

Fierstein divorced Puzder in 1987. Eight months after appearing on “Oprah,” she retracted her allegations of domestic abuse as part of a child custody agreement. She said repeatedly thereafter that the allegations were a tactic to gain leverage in her divorce.

Can’t help but wonder how much the WH having fed Gen. Flynn to the pigs weighed on Puzder’s decision to withdraw.

So he allegedly hit his wife 30 years ago and is still paying for it. But people like Bill Clinton and Ted Kennedy are still gods among us men…

I saw reports stating that she withdrew those claims because she used them to inflict damage during the divorce process.

These actions only make it harder for women to be believed and move up.

He knew the problems that business deal with in the current environment. He would have been a good Secretary. Our loss.

Well, he also employed an illegal alien domestic for five years and neglected to remit her payroll taxes, which the IRS calls theft when others do it. That would have come up.

Whoever heads up nominee vetting for the Trump admin needs to be fired.

Well, I would say this demagoguery is beginning to work for the Demoncrats and the Media! Successful hard working people willing to give back to the country are being run out of town! It’s disgusting!

Exactly. And they will continue to win if Trump supporters continue to do nothing to push back and counter the progressive left. Trump doesn’t stand a chance if we let them be the only voices heard. Trump fans need to wake up because they put someone in office with zero political experience and are hanging him out to dry by acting like his election was the end. If that is the case, they’re about to learn that’s not enough, if they haven’t figured it out yet.

Fuzzy, what do you suggest we do?

Doesn’t accountibility accrue to the Trump admin for failing to properly vet nominees?

“Trump fans need to wake up ”

I remember how you scolded all the “Trump fans” that supporting trump would cause the “conservatives” to lose the senate.

“Trump fans” are not the problem.

Now nominate Scott Walker. The Democrats will wish they had Pudzer.

Trumps own first wife made up that he raped her and then retracted it.
Geez, there needs to be repercussions when people make this crap up

Peter Kirsanow is being floated as a replacement. He would be a great choice–Democrats are going to wish they had Puzder back when he comes in.

Agreed – I never thought that Puzder was that great a pick, he always struck me as more of a crony capitalist friend of the Prez than anyone who had much of a vision for the Labor Dep’t.

And if he is gonna fold over the relatively small amount of scrutiny he’s received so far, he would *Never* have stood up to the howling and constant personal attacks that will come when anyone tries to make some serious changes in labor policy. We need a fighter who’s been on the front lines in this job, someone who knows they are going to be hated every minute they are in office – someone like Pruitt at EPA, someone like Sessions, someone like Perry. (don’t underestimate Perry, he’s been on the front lines for a long time)

I think Puzder, when he was asked, thought this would be kind of a fun little project for 2 or 3 years. When he found out this is going to be bitter trench warfare every day he’s in this job, it looks like he folded like a cheap lawn chair. So goodbye, weak sister. There’s plenty of candidates out there that are better prepared for this position than he was.

Kirsanow would be a stellar choice and much better than Pudzer anyway.

Someone still needs to be at the helm to take apart the department. There are a lot of regs to be reversed, laws to be reversed and then what remains needs to be cleaned up before it can be delegated to a place in the government.

We have to kill the department from within. Just defunding it doesn’t kill it. It will come back when the Ds get back into power.

Supposedly there were up to ten other ‘pubs who weren’t supportive of Pudzer. Collins and Murkowski were two of up to a dozen.

Does anyone know who the other ten were?

don’t know, but if there really were that many then something was seriously wrong with this nomination, something we haven’t been told. I know that it has been very curious how Puzder delayed and delayed getting all of his paperwork filled out.

As long as he was going to beat the unions, especially public unions, he was okay in my estimation, although he struck me as a bit of an odd duck in terms of personal presentation.

Maybe it was those banned Carl’s Jr./Hardee’s commercials?

A scalp for the GOPe.

He may not have been the best choice, or a perfect choice, but it isn’t his “bad” qualities that they didn’t support.

I suggest Herman Cain as labor secretary. I’m not the first.

Compared to the odious Israeli Ambassador nominee I would say Puzder is a gem.

“Odious”?! You are odious. David Friedman is a wonderful person and will make a wonderful ambassador.