By their silence, Dems are being associated with violence on campus 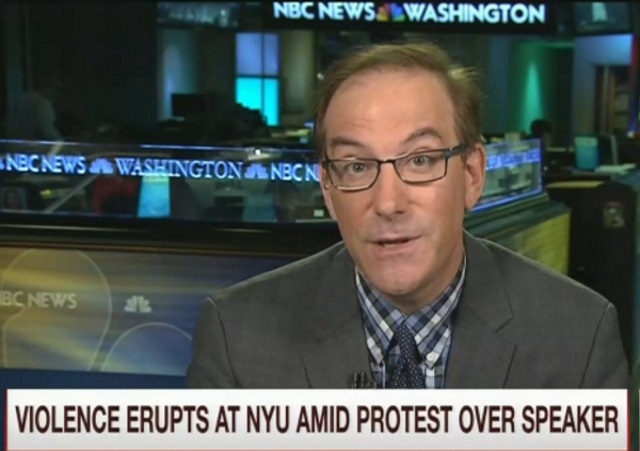 Larry O’Connor’s suggestion was so brilliant that . . . Rachel Maddow is almost sure to ignore it.

On today’s Morning Joe, Weekly Standard editor and radio talk show host O’Connor suggested that Rachel Maddow, accompanied by Dem senator Cory Booker, should escort onto campus Milo Yiannopoulos and other conservative speakers who have been confronted with violence.

Maddow should make the point, suggested O’Connor, that violence is “not what we do in America.” O’Connor argued that by their silence, Dems are being hurt by the protests because Americans are seeing opposition to Trump as “violent thugs.”

Note: the segment began with a report that there was violence last night at NYU, with people protesting against a speech by Vice co-founder Gavin McInnes. He was pepper-sprayed while entering the hall, and several demonstrators were arrested.

WILLIE GEIST: It was another night of violent protest at another college campus over another controversial speaker. Conservative speaker and Vice Media co-founder Gavin  McInnes was scheduled to speak at New York University last night at an event organized by a Republican group on campus. Before the speech began, protesters gathered outside the building where  McInnes was scheduled to appear, He was hit by pepper spray on his way inside according to a university spokesman.

Shortly after his  McInnes’ speech began, people started to curse at him and shove one another.

JOE SCARBOROUGH: You got to stop that.

JOE: Larry O’Connor: oh Lord. What’s going on here, Larry? I read a book called The Closing of the American Mind back in law school about 800 years ago.

O’CONNOR: That book was controversial when it came out.

JOE: It was controversial when it came out. Now of course people like Condi Rice and Christine Lagarde are pressured from speaking at commencements: it’s unbelievable.

O’CONNOR: That’s right. It’s not new. I just spoke with Michelle Malkin on my show yesterday on WMAL in DC, and she said yeah, they did this when I had my book at Berkeley ten years ago. They didn’t have bonfires and riots and this kind of thing. But this is a real danger for the left and Democrats.

You know, if Democrats were smart, if Cory Booker were smart, he would ask Rachel Maddow to join him, with Milo Yiannopoulos, with Ben Shapiro, and escort them onto a college campus and say: no. This is not what we do in America. If we disagree, we listen and then we argue with our points. This is ridiculous. And Democrats, by their silence, the left by their silence, they’re getting locked in with this. To the American people’s eyes, to citizens across this country, they see opposition to Trump, and opposition to conservative values, as violent thugs. That’s not a good thing.

The anarchists don’t respect MadCow any more than they respect anyone who even smells like they might oppose them.

Interesting point. If a conservative is a liberal who’s been mugged, it would be fascinating to see how Maddow would react if she did accompany Milo onto campus and was still met by violent protests.

*Ahem* We just had a United States Presidential campaign, in association with its national political party, that bought and paid for rent-a-rioters to follow the opposition and attack people who went to rallies.

Bill and Hillary Clinton are the people who should be escorting speakers to college campuses.

HA! Madcow would be on the front lines holding a torch and screaming!

She doesn’t need to escort him; she would just have to invite him on to her show and let him talk. But she would never, ever allow that, for all of the obvious reasons.

Every time these abnormal people freak out and riot (they’re not protestors–protestors carry signs and walk; rioters are violent and cause damage), I become more of a Trump supporter. This is amazing to me as I started as a NeverTrumper just on principles. And the more the anti-Americans riot, the more I become a Trump supporter. Heck, I might even vote for him in 2020 at this pace, as he’s actually shown some real-world conservative actions that the GOP failed to do year after year during the Bush and Obama admins…

notamemberofanyorganizedpolicital in reply to princepsCO. | February 3, 2017 at 11:53 am

It’s nice to have “the walk” instead of only “talk” isn’t it?

Hey Democrats, no promise takes 60 and 70 years to fulfill.

I think everybody is missing the point. These rioters are nothing more than anarchists (they should be on Homeland Security’s list, not returning vets) and should be handled accordingly. They’re also being paid for by somebody, perhaps George Soros.

They may well be anarchists, but I believe O’Connor has a point: by their silence, Dems are associated with the rioters in the minds of the public, and that will hurt them at the polls.

Exactly.
The Chuck Schumers, the Nancy Pelosis, and the TV pundits like Maddow need to openly condemn this violence. As far as I’m concerned their silence means they approve.
Our President should start poinging that out.

Most Dems believe in civil rights for people who agree with them, period. Influential Dems who know better prefer to avoid jeopardizing their status, so they don’t speak up. Where is the ACLU, or the DOJ’s civil rights division? For those who ably criticize the Left there is well organized violence to silence the speech, and to intimidate all who might dare to agree with that speech.

“To the American people’s eyes, to citizens across this country, they see opposition to Trump, and opposition to conservative values, as violent thugs.”

You mean we see them as they really are. The reality here is that dem politicians like Pelosi and Reid and now Schumer see this violence as energizing their base and they are doing a great deal to encourage it with their rhetoric.

The dems believe they are benefiting from this and they will not stop stoking intolerance and violence until it becomes overwhelmingly obvious that it is hurting them. That being the case I believe we can expect to see escalating violence through 2020 at the very least.