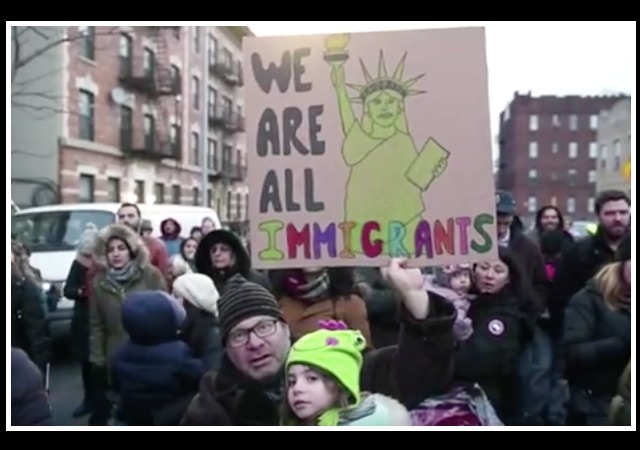 The Department of Homeland Security (DHS) and State Department have announced officials will suspend “any and all actions” over the executive order President Donald Trump signed to halt immigration from seven countries. Trump signed the order so the government could put together a better vetting process to weed out terrorists. From The Hill:

“At the earliest possible time, the Department of Justice intends to file an emergency stay of this order and defend the President’s Executive Order, which is lawful and appropriate,” spokesperson Gillian Christensen said in a statement, as first reported by BuzzFeed News.

Homeland Security said in its statement that it was suspending “any and all actions implementing the affected sections” of the order.

“This includes actions to suspend passenger system rules that flag travelers for operational action subject to the Executive Order. DHS personnel will resume inspection of travelers in accordance with standard policy and procedure.”

This decision comes a day after a federal court in the Western District of Washington in Seattle halted the enforcement of the order on visas and refugees. Professor Jacobson provided an excellent analysis over that decision earlier today.

The State Department also said its officials “has reversed the cancellation of visas that were provisionally revoked following the President’s executive order last week — so long as those visas were not stamped or marked as canceled.” The officials had revoked 60,000 travel visas after Trump signed the order.

After the judge’s ruling, international airlines changed their policies and allowed people from the seven countries to board US-bound flights. From CNN:

US Customs and Border Protection informed major American airlines on a conference call late Friday that it was “back to business as usual,” effective immediately, an airline executive told CNN.

—
Emirates Airlines, Qatar Airways and Etihad Airways, major operators that connect the Middle East to the United States, said Saturday they would allow citizens of the affected nations on their US-bound flights. Emirates Airlines and Qatar Airways said those presenting a valid, unexpired visa or green card would also be allowed to board.

Air France also said it would accept passengers from the seven countries.

“Air France takes note of the decision of the American courts to suspend the presidential decree of 27 January 2017 prohibiting entry into the US for citizens of seven countries,” the airline said.

“Consequently, and subject to satisfying the conditions of entry into the United States, as from today Air France will accept passengers from the countries concerned on its flights to the US.”

Germany’s largest carrier, Lufthansa, made a similar announcement but warned that “short-notice changes to the immigration regulations may occur at any time.”

U.S. News reports that visa holders are rushing to enter the U.S.:

Visa holders from seven majority-Muslim countries affected by President Donald Trump’s travel ban hurried to board U.S.-bound flights Saturday, fearing they might have only a slim window through which to enter the country after a federal judge temporarily blocked the ban.

Those who could travel immediately were being urged to do so because of uncertainty over whether the Justice Department would be granted an emergency freeze of the order issued Friday by U.S. District Judge James Robart in Seattle. The government on Saturday suspended enforcement of the week-old ban as it scurried to appeal Robart’s order, although an immigration lawyer said passengers in at least one African airport were told they couldn’t get on the planes.

“We’re telling them to get on the quickest flight ASAP,” said Aoun, whose group filed a lawsuit Tuesday in federal court in Detroit asking a judge to declare Trump’s immigration order unconstitutional.

So people are being urged to get on the quickest flight possible? Tells me these people aren’t confident thir “win” will be for long!

So let’s assume these people get in, I’m just wondering how many of them will leave before the visas expire?

If that number is low, as I expect it will be, then shouldn’t these groups be held accountable as accessories to crime?

Oh, they know its going to be reinstated.

They’re going to have to pay their own way back out of the country they despise though.

One thing I’m still not clear on.

Are these people supposed to be admitted to the US?
Or do they simply have visas, which may or may not allow them entry ionto the US?

Interesting how the robed Social Justice Warrior dropped his ruling just as a weekend started so the appeals court couldn’t be quickly called into session to over-rule him.

Methinks that judges needs to be investigated….. imo…

Since the DHS announced it was no longer enforcing any part of the Trump EO, does that mean that the approx. 50 lawsuits filed against Trump for the EO, across the nation, will now go away because they are now moot?

To FarFromIt:
It depends. Some may be moot, however, since the jockeying right now means the status of the restriction can change at any time they can get a judge to hear it, some of them probably are not moot and will not be moot.

“the People” and “our Posterity” are native Americans. Everyone else is an immigrant either foreign or native born.

That said, the patrons of refugee crises have a conflict of interest that creates an incentive for progressive wars, elective regime changes, abortion rites, and anti-nativism.

Dear n.n:
I believe you are correct on all counts. Ann Coulter has discussed the financial incentive the churches have because they are being paid handsomely to resettle “refugees.” They’re a money making activity.
CTF

It is a [email protected] shame that, should one or more of these people is involved in a terrorist action, we cannot hold this judge to be culpable. And the DA also.

Does anyone have a link to any statement on the Dept. of State or DHS that validates any of these dubious reports? I seem to be having a problem validating what the media is crediting as capitulation by the administration to a lower federal court ruling.

It is nothing more than complying with the order.

Perhaps they will just reset the beginning of the running of the temporary time period once the district court order is slapped down.

Even native Americans are immigrants. Just because they were here when Columbus or Erik the what ever colour rocked up doesn’t mean they were the first people here at that time.

Friedman made a delicious example of an early lefty SJW over this very point a number of years ago…before people like him (i.e. anyone capable of rubbing two or more brain cells together) were hounded out of higher education.