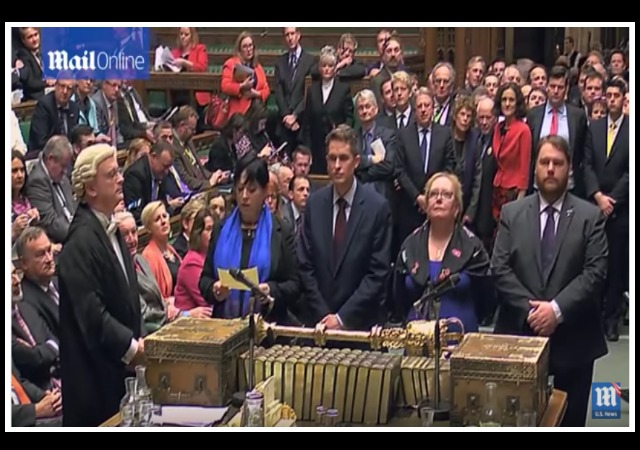 The UK Supreme Court ruled that parliament must vote on Brexit before Prime Minister Theresa May could invoke Article 50 of the Lisbon Treaty, which allows a country to leave the European Union. Well, those members of parliament in the House of Commons voted in favor of continuing the process. From CNN:

Members of the House of Commons voted by 498 to 114 to advance the bill that would give Prime Minister Theresa May the authority to invoke Article 50 of the Lisbon Treaty — the formal process of leaving the EU.

The size of majority in favor of triggering Article 50 on Wednesday means the bill is almost certain to become law. But a battle is expected next week when the bill returns to the House of Commons for detailed scrutiny in the committee stage. Opposition parties will then try to push through a series of amendments.

The House of Lords, the UK’s upper house, will also need to approve the Article 50 legislation before it can become law.

Triggering Article 50 gives the UK two years to negotiate a separation deal with the 27 other members of the EU. May has said she wants to fire the Brexit starting gun by the end of March.

The Prime Minister told the House of Commons that she would publish her detailed plan for Brexit in the form of a “white paper” on Thursday.

Dang it wasn’t even a close vote either.

Good for them! 2 yrs to get out though. Geez.

I’m thinking (about the 2 years thing) that is just the time period they have to negotiate with the 27 other countries probably mostly trade and such. This could be done in a few months. Hire 27 people just for the task at hand and send them, one each, to the other 27 countries (how ridiculous is that), and just give an ultimatum: We trade with you, you trade with us, no tarrifs, no subsidies otherwise we’ll just trade with others e.g. U.S., India, Africa. There are only about 200 other countries in the world. The world only needs so much chocolate and brie.