U. of Texas Instructors Hold Office Hours at Bars to Avoid Campus Carry

U. of Texas Instructors Hold Office Hours at Bars to Avoid Campus Carry

Because we all know gun-free zones are so much safer

I will never fully understand the irrational fear of inanimate objects that leads people to do things like this.

A handful of instructors, mostly grad students, from the University of Texas are holding office hours in a bar after the state implemented campus carry laws. They’re hoping gun-free zones will keep them safe.

Under the Lone Star State’s campus carry laws, only licensed concealed carry permit holders are legally allowed to pack heat on participating college campuses, and even then, only on certain parts of campus.

Mark Sheridan is one of those instructors and a graduate student. He said he wasn’t alone in his decision, “I and many other grad students wanted to find a space where we could hold our office hours without guns legally being allowed,” he said. He along with many others are holding their office hours at “The Cactus Café.” It’s still on campus but a sign clearly states near the door that 51% percent or more of its profits are based on alcohol sales which means weapons are not allowed.

Professors with private offices have the option of allowing students to carry concealed or not, but as a graduate student Sheridan said he doesn’t have his own office, so he had to improvise. “I see firearms as a risk fundamentally; it’s about workplace safety for me.” Sheridan said being a student and getting a college education can be stressful. “You can talk to any instructor, any faculty member, and they will tell you, including me about instances in which students have been upset or even angry at you and you’ve felt uncomfortable.” Sheridan said in his opinion allowing guns in meetings could make some situations unsafe, “I was a little bit worried about a student I was interacting with, and we believe when you add firearms into such a high stress environment, it can only go wrong basically,” he said.

Are you really safer in a bar than a designated concealed carry zone? Do we really need to ask this question?

Those with “Students for Concealed Carry” said quite the opposite that bar meetings put everyone at a greater risk. Brian Bensimon is the Southwest Regional Director, “When they go to a bar, they are actually more likely to be a victim of violence there then they are if they just had it at a regular classroom or a place that did allow it.” Bensimon said they are just trying to get around the law. “I think that when you have these kinds of battles, when you feel very strongly on an issue the correct arena is the political arena. I don’t think that you should be going over the law or maybe finding loopholes to not implement the law in the way it was originally intended,” he said.

Grad students have held office hours in all kinds of locations — bars, coffee shops, libraries, for ages. But in this case, the motivation is not casual conversation or compensation for lack of a proper office, it’s to skirt state laws.

According to the Crime Prevention Research Center, only 1.6% of mass public shootings in the U.S. since 1950 have occurred in an area where firearms were allowed. The rest? You guess it — gun-free zones. 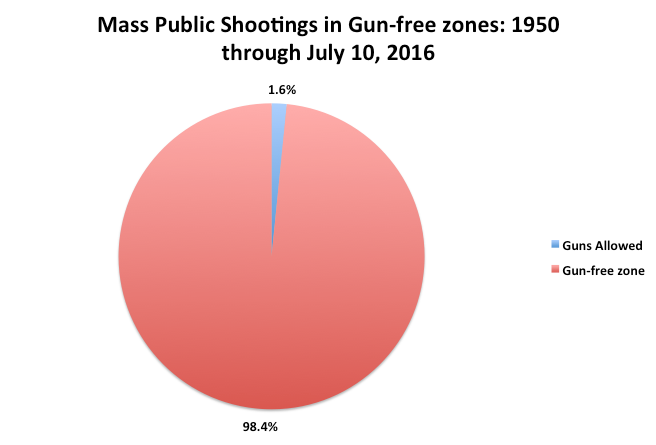 (Yes, I do know that the Cactus is a cafe, bar and entertainment venue on the UT Campus. Since it states that more than 51% of it’s revenues are from alcohol sales it’s primarily a bar.)

That thought occurred to me, too.

What I really want to know is this: How do the owners of “The Cactus Cafe” feel about people coming in and out and using their facilities to conduct business, but not buying anything?

It’s very simple. Every seat that could be filled by a paying customer, but is instead taken by someone not buying anything, represents lost revenue for the cafe.

Are the cafe owners OK with this arrangement?

Perhaps you’re correct… What if the entire argument is a battle of ideologies and the ‘bars’ owners are of the same twisted logic? Hence, they are willing to take a minor loss to make their ideological argument relevant. The only way to clear everyone’s thinking is to have an old fashioned shout-out in the ‘bar’ – or have a dozen bikers show up and break the place up, where a gun might come in handy. Rational talk doesn’t seem to work for liberals, but fear might.

If they don’t drink alcohol they can be there.

Having been through the whole Grad School experience for my MA and PhD, this seems more like an excuse to go to a bar while virtue signalling. I always held my office hours in, well, my office. Getting them to show up is the challenge.

But that doesn’t have the same panache as “gun-free zone”.

Victim Rich Environments is what I call them.

So what next? Are universities going to get liquor licenses and call every single building a bar? I can honestly see one of them trying it.

I think what this really shows is that UT students are getting nothing more out of attending class than they would get out of a friday night BS session at the local bar. Maybe minus the music so loud you can’t even hear yourself.

Won’t work. Texas law stipulates that an entity must derive over 51% of its income from liquor.

Easy to get around.

Just sell $60k bottles of wine that come with a voucher for a semester’s tuition.

“Ah, this is the Chateau Texas University, ’19, a very good year. A fine, full bodied whine…”

That’s not how it works. The “bar” designation means nothing. The statute says the venue must make at least 51% of its revenue from alcohol sales.

Besides which, revenue source notwithstanding, if every building is a “bar”, 2/3 of the student population — i.e. everyone under 21 years of age — is legally barred (heh!) from entering.

Then they’re in a legal quandary wherein most students can’t enter the building because it’s a “bar”, but they still can’t declare it a “gun-free zone” because they fail the 51%-revenue-from-alcohol requirement.

Nope. Not barred from entering. If they don’t drink they can be in a bar.

In Texas? I didn’t think that State had ANY gun free zones? 🙂

By law, a business can post a 3006 or 3007 sign to be gun-free. Thus, movie theaters can legally designate themselves as gun-fre zones (why I don’t go to the movies).

Also, in the CHG law there are entities that are declared gun-free. For example, a bar that makes over 51% of its income from liquor sales.

To be ACTUALLY “gun free”, an establishment must have controlled ingress and require people to go thru a metal detector AND submit to a frisk and cavity search. A “NO GUNZ” sign is no more effective at preventing gun carrying than a “Stop sign” is in causing a car to stop. In the FUTURE, carz might recognize a stop sign or red light, but they do not now.

I saw your sarcasm, even if others didn’t. 😉

Perhaps you did. Perhaps you did not. If you want to ladle out the sarcasm, you need the government-certified USDA Choice icon for sarcasm. It looks like this:
#FakeNews

Liberals are not the sharpest crayons in the box. The easy solution is for every single professor and teacher to obtain a carry permit and carry a pistol at all times while on campus. That way, they can be in a position to defend themselves from those who threaten them, physically.

LOL, on range day for these folks you could make a fortune selling individual adult diapers for when the pansies wet themselves!

Just so y’all know, according to Texas CHG law, bars are by law gun-free zones. No guns allowed in an establishment that makes over 51% of it’s income from liquor sales.

Clever of these profs.

Profs have offices, and are allowed to declare their offices as “gun-free” if they wish. These instructors don’t have offices.

Yes, it’s clever of them to find a way around campus carry. However, as I stated above, I wonder how the owners of the cafe feel about students coming and going, using the cafe’s facilities, but not buying anything.

You really think college students and grad students are hanging out in bars and *not* buying anything?

That’s not how I remember college. Or grad school.

I sense an opportunity for a James O’Keefe style sting.

When I went to Texas State there were a few profs and lecturers who would hold meetings at a local drinking establishment named Grins, but I’m darn near positive they did it to get the coeds drunk in hopes of getting laid.

Thus the difference/comparison with University of Texas Austin where every student and professor is gay.

Are they afraid of a student revolt to a trillion dollar certification and debt crisis?

In the early days of electrification of homes, some people would not go into these homes for fear electricity would jump out of the wall sockets and switches and electrocute them. Grad students… BS, MS, PhD… bullsh*t, more sh*t, piled higher and deeper. And how!!!!

We can only wonder when a student will bring a kid’s water pistol to the “office hours”, lay it on the bar, and smirk to the prof, “Yeah, Einstein, your idea was really brilliant.”

When that happens, standby for ensuing hilarity.

Thanks for reminding me. I looked up the alcohol license and the “cactus cafe” is NOT a “bar” as it does not get 51% of its money from alcohol sales. I informed the state licensing agency and concealed handgun licensees should soon be able to go in without the improper 51% sign

Alinsky Rule #4: Make the enemy live up to its own book of rules.

They could paper the walls, floor and ceiling with 30.06 signs, but it is still state property and thus, the signs have no meaning. And because it is ON university property, open carry is not allowed.

By the way, while I refuse to cross a 3006 or 3007 sign and do not enter most gun-free zones, I do support allowing private businesses to post 3006 or 3007 signs to keep me from entering without my gun(s).

Also I supported the idea of letting everyone at University of Texas Austin vote (on being a gun-free zone), including every student, professor, admin and staff. If they chose to be a gun-free zone, let them.

In that case, the government of the State of Texas and the US Federal government should have promptly stopped all funding to the University. BOHICA.

So if people on my block “voted” to legalize slavery, you would be OK with that? “Local control”?

Seriously, I am supposed to believe that a group of grad students are holding their office hours at a bar out of fear for their lives?

I had friends like that, too. They would say anything for a chance to do their work around a pitcher of beer, not that they would get much work done.

Check him out, he looks like Pajama Boy, except even more of a pussy.

Oy, what a put-on. It probably has a lot less to do with guns than it does with alcohol. “I’ll be down at the office” can rank up there with the classics like “the check’s in the mail,” “honest, it flew into my hand,” and “let’s just see if it fits.”