“They are hated and despised.” 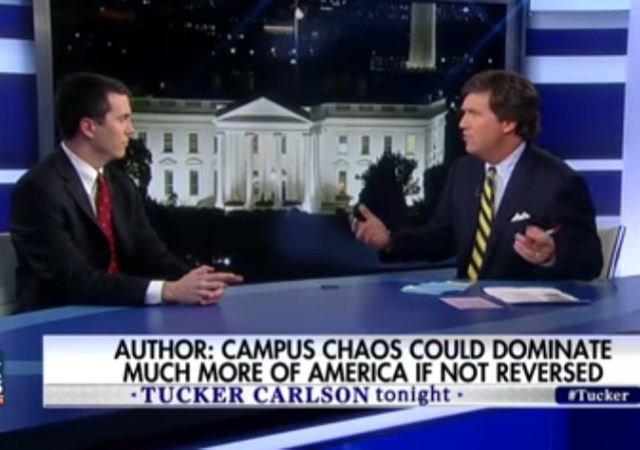 Tucker Carlson said true things on TV recently that triggered the far left. Carlson had the audacity to point out the left’s hierarchy of victimhood on college campuses.

He was talking to guest Scott Greer, author of the book “No Campus for White Men.” Carlson pointed to the case of Nicholas Christakis who left his position as master of Sillman College at Yale after being verbally assaulted on campus by social justice warriors.

The folks at Media Matters are quite unhappy about it:

Tucker Carlson: On College Campuses “Everybody Gets A Safe Space Except White Men. They Are Hated And Despised”

TUCKER CARLSON (HOST): If you’ve been awake at any point in the last 50 years, you know that American colleges are basically pretty liberal. But in the past five years or so, campuses seem to have been hit by a fever they haven’t experienced since the 1960s. Instead of focusing on professional skills or the sweet treats of scholarship, millions of students and professors have made far left politics their only reason for being at school.

The result is this: everybody gets a safe space except white men. They are hated and despised. What is this about, exactly? Scott Greer is the author of a new book that considers it, it’s called No Campus For White Men, and he joins us in the studio. Scott, thanks for coming on.

SCOTT GREER: Thanks for having me on, Tucker.

CARLSON: So the hysteria level is rising, that’s not my imagination. I went to college at one point. It wasn’t like this.

CARLSON: There’s so many ironies in all this, I guess the first one you sort of noted, everyone in college is privileged by definition. They’re not working for a living. They’re learning, which was considered a privilege for like a thousand years.

Carlson was acutely aware of the changing face of higher education in America. “In the last five years or so campuses seem to have been hit by a fever they haven’t experienced since the 1950s,” he said.

“Millions of students and professors have made far-left politics their only reason for being at school. The result is this: everybody gets a safe space expect for white men. They are hated and despised,” he continued, introducing Greer.

Greer lamented the state of campus politics today, pointing to a near complete takeover by the radical left. “Identity politics and victimhood culture have taken over higher education,” he explained. “More important in some ways is victimhood culture, where everyone competes to be the biggest victim.”

And my tax dollars are subsidizing this destructive nonsense by the left.

Encourage your kids to get a degree in science or engineering… they won’t have time to participate in or be distracted by all this nonsense… they will be studying.

There is, of course, the added benefit that they will find gainful employment upon graduation.

Or math. Math is still pretty safe, as well.

The problem has long been identified. Solutions?

#1 : No financial student assistance from the government ( in any form ).

#2 : all funding for the school comes from tuition, nothing else. ( no text book based funding either! )

If it has no employment potential, the schools will be forced to jettison it.

If the school has insane funding expectations, this will force a reality check.

If the parents are forced to pay the bill, expect some form of “Quality Control” to be implemented, by the parents. ( short and long term QC. )

If the school is a “participation award” diploma mill … they will wind up with no business.

If the school is a socialist political indoctrination / socialist cannon fodder production center … they will wind up with no business.

Those who go to college thinking it is one loooooong drunken stupor … will quickly weed themselves out. Or their parents will weed them out.

Example : anyone remember the fate of ITT?

Get the federal government out of student loans,the same easy money philosophy that ruined the housing market is flooding the colleges and creating an atmosphere of entitlement.
Government should promote policies that help vocational training. Not everyone needs college . Many technical and skilled trades could be taught in vocational training centers .

I’d take it a step further. No Government subsidies at all for these indoctrination centers, federal, state, and local. If they want to stew in their hatred, they have that right, just not on the tax-payer’s dime.

Finally, tax universities and colleges as they tax any other business, end this ‘non-profit org’ nonsense. The pretense that they’re ‘above’ other businesses ends.

Students enrolled in degrees that qualify them for nothing better than a barista or a government job will not be paying back their loans during their lifetime, and so a natural Darwinian selection of degrees offered will eventually result.

Require that the universities and politicians respect and defend civil rights. They currently like the Jim Crow South with anarchists as their KKK.

Just to clarify, Nicholas Christakis did not leave Yale. His own website still lists him as the Director of the Human Nature Lab at Yale.

He left the position of Master of Silliman College at Yale.
It appears that his wife Erika Christakas is also still at Yale. http://erikachristakis.com/author/

I just self identify as a black, female, muslim, handicapped multi non-norm. So whatever the heck that is, I should be able to wander the campus freely.
Haven’t come up with what I want to be addressed as yet though so a lyrical grunt will do just fine for now.

I found this article interesting. It describes a market-based end-run around the corrupt university system.