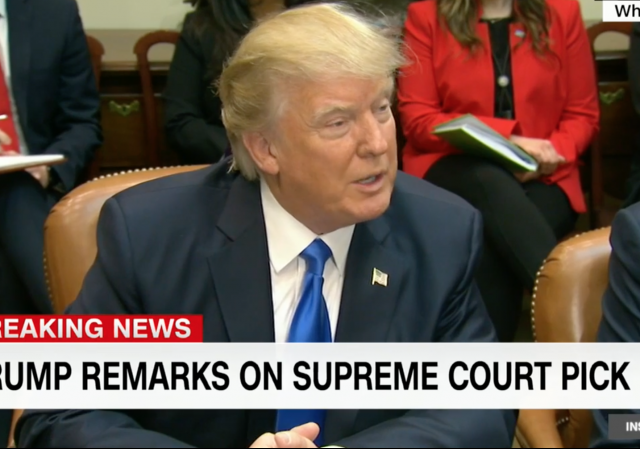 The Nuclear Option would allow the Senate to confirm Gorsuch with a simple majority as opposed to 60 votes.

Before Trump’s SCOTUS pick was announced, protesters crowded around the Supreme Court, complaining about any pick President Trump might make. Once Gorsuch was officially named, Democrats began their largely baseless attacks.

The best liberal meltdowns (so far):

As soon as Trump formally announced Gorsuch as the official SCOTUS nominee, Democrats (and MSNBC) began labeling him as out of the “mainstream”. “Mainstream” was used far and wide as was “consensus candidate.” Forget finding a SCOTUS justice who would impart strict textualist like Justice Scalia, Democrats insist on a “mainstream” “consensus candidate” read: not a Constitutional adherent that could weaken the progressive coup.

Nancy Pelosi claiming Gorsuch is “hostile” towards children with autism:

This one is my favorite.

“The president and his first appointment to the court, and hopefully his only appointment to the court, has appointed someone who has come down on the side of corporate America versus class action suits, on securities fraud, he’s come down against employees’ rights, clean air, clean water, food safety, safety in medicine and the rest. If you care about that for your children, he’s not your guy. Gabby Gifford’s group, the group for responsible solutions relating to gun safety, said that he comes down on the side of felons over gun safety. Hostile to women’s reproductive rights. Hobby Lobby case, for example. The list goes on and on. Criticized progressives for bringing cases that relate to LGBT progress, taking those cases to the court. What saddens me the most as a mom and a grandmother, though, is his hostility towards children in school, children with autism. He has ruled that they don’t have the same rights under the IDEA that children — that they could reach their intellectual and social advancement under the law. He has said that doesn’t apply to them. He’s come down against them under the ADA, as well, and again under IDEA. So it’s a very hostile appointment [indecipherable] fellow, well met, lovely family, I’m sure. But as far as your family is concerned, and all the — if you breathe air, drink water, eat food, take medicine, or in any other way interact with the courts, this is a very bad decision. Well outside the mainstream of American legal thought. Not committed to Supreme Court precedents, Supreme Court precedents.”

Not only is this a stolen seat, but @realDonaldTrump has nominated a far right extremist. Unacceptable. https://t.co/9bkw4QODXD pic.twitter.com/iVHDdb2Pn9

Gorsuch put corps over workers, been hostile toward women’s rights & been an ideolog. Skeptical that he can be a strong, independent Justice

SCOTUS justice must stand up to a Pres willing to bend the Constitution. Serious doubts on Judge Gorsuch’s ability to meet this standard.

Gorsuch represents a breathtaking retreat from the notion that Americans have fundamental Constitutional rights.

Gorsuch harkens back to the days when politicians restricted a people’s rights on a whim. That is a very dangerous view to our liberty.

No senator who believes individual rights are reserved to the people, not the government, can support Gorsuch’s nomination.

Sen. Leahy is also not impressed:

Attaboy Mr. President, give the Majority Leader a Trump Testicular Transplant like the one you must have given Senator Hatch earlier today.

This is just (as in worthy) payback.

To paraphrase, we’ll have to approve the nominees to find out what they believe.

My initial gut reaction was to say, ‘ESAD’ but I reconsidered.

I guess that ‘stolen seat’ is the newest talking point coming out of G. Soros to undermine the SCOTUS now.

Might as well. Somebody pulled aside the curtain, showing that there was never going to be co-operation from the Democrats.

To McConnell, going nuclear would mean running to the bosom of the Schumer, like his buddy Rubio.

In prison talk (lingo Hillary Clinton should consider boning up on), Trump is about to pull McConnell’s tits out.

McConnell has stated the nominee will be confirmed.

Either he knows the D’s will not actually filibuster or he plans to revise the rules.

It’s time to preemptively use the the Reid Rule(Go Nuclear).

Why waste time just do it now!

Wow. You managed to quote BOTH my Senators in one article (Ron Wyden and Jeff Merkley, both “D-OR”), and they each got their own sub-heading. That NEVER happens! LOL!