Ahead of his first address to a joint session of Congress 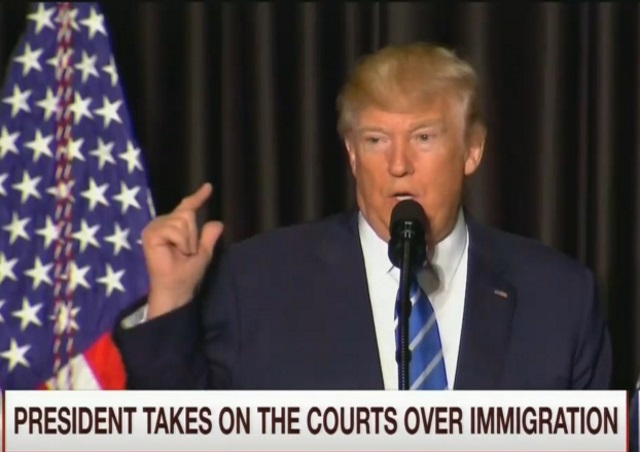 The White House has drawn a significant amount of criticism for poor communication. In an interview with Fox and Friends, Trump took responsibility for the communication problems.

Trump, in an interview with “Fox & Friends,” specifically cited his immigration policy, and said that perhaps the rollout of his plan to keep out and remove criminal illegals hadn’t been communicated effectively.

He later awarded himself a grade of a “C” or “C-plus” on communicating, straightforwardly saying, “My messaging isn’t good.” He clarified that he would give himself an “A” for achievement and “A-plus” for effort.

President Trump is preparing for his first address to a joint session of Congress. NOTE: This is not a State of the Union address.

In his interview with Fox and Friends, Trump also discussed his plans to tackle the southern border and military spending:

rump added on immigration: “We’re getting the bad ones out, the bad people, gang people, drug lords, in some cases, murderers,” echoing the campaign rhetoric that dominated speeches from Day 1 of his candidacy for the GOP presidential nomination.

“I’m much tougher in getting the bad guys out,” Trump said, contrasting himself with former President Barack Obama. “He was much less focused on that.”

As the president plans to boost the military, Trump’s proposed $54 billion increase in defense spending is coming largely from cuts to the State Department and Environmental Protection Agency. He suggested Tuesday that foreign aid would be a target of the cuts.

“We’re going to do things having to do with other countries because we’re treated very, very unfairly,” Trump said. “…We’re taking care of their military and we’re not being reimbursed. They’re wealthy countries.”

Trump pledged to use his “Art of the Deal” expertise to drive down costs, as well.

“I am going to get involved in negotiating,” Trump said. “We have many planes and boats and ships … we’re spending too much money individually on.” He said the U.S. would “get a lot more product for our buck.”

Trump also said some of the monetary increases would “come from a revved up economy” and pointed to the numerous manufacturers and car makers – such as Carrier, GM and Ford – that have announced investments in U.S.-based factories and jobs since he was elected. Previously, Trump said, “they were fleeing this country.” Meanwhile, a bullish stock market has created “trillions of dollars in value.”

Join us this evening for our live coverage of Trump’s Congressional address.

It’s subtle, but there. Not as much as those of us who would like to see him bring a battle axe into the speech and bury it in the podium before he starts talking (to get their attention).

Naaa, I don’t think that would even make them blink. “Trump Hates Wood!”

So is Rags doing your editing now?

Well for you and I nothing but fir our reality challenged media, everything.

Considering that all the D’rats, almost the entire press—both foreign and domestic, a monobloc of Hollywood bigmouths, and far too many Repubs are trying to either drown out or spin everything Trump says … I’d say his communication is excellent.