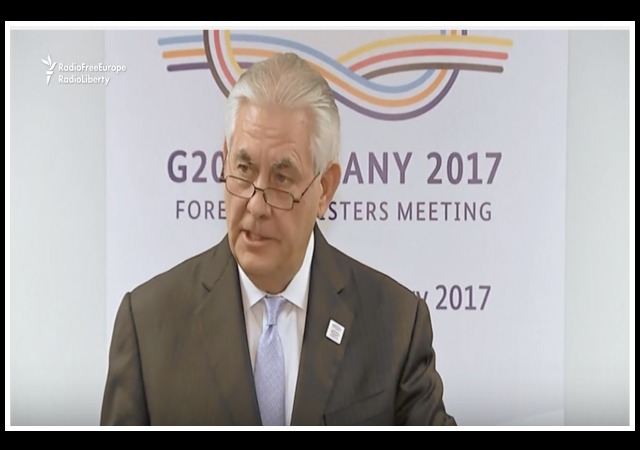 Secretary of State Rex Tillerson met with Russian Foreign Minister Sergei Lavrov during a trip to Germany. Tillerson said the U.S. will only “work with Russia when mutual cooperation is beneficial.” He promised to put American interests first, though, if the two countries “do not see eye to eye.”

At the same time, Secretary of Defense Jim Mattis soundly “rejected any kind of military collaboration with Russia.” Russian President Vladimir Putin asked for more cooperation between the U.S. and NATO.

Mr. Putin made a plea for the alliance and other nations to cooperate with Russia in an address to the Federal Security Service on Thursday. “It’s in everyone’s interest to resume dialogue with the intelligence agencies of the U.S. and other members of NATO,” Mr. Putin said.

“We are not in a position right now to collaborate on a military level,” Mr. Mattis said at a meeting of North Atlantic Treaty Organization defense ministers in Brussels. “But our political leaders will engage and try to find common ground or a way forward where Russia, living up to its commitments, will return to a partnership of sorts, here with NATO.”

Mattis also exclaimed that Russia has “violated international law and are destabilizing.” After all, they annexed Crimea and have troops in east Ukraine.

People continue to talk about a Russian spy ship in international waters off the U.S. coast, but that same spy ship has been there for years. It has appeared many times in the Gulf of Mexico and off the coast of Georgia. It even docked in Cuba the day before former President Barack Obama visited.

He echoed many sentiments when he stated that he believes Russia has “interfered” or “have attempted to interfere” with numerous elections around the world.

After meeting with Lavrov, Tillerson gave a small speech about the talks. He did not provide many details about the meeting, but from what he said it appears he will keep a strong stance against Russia:

“As I made clear in my Senate confirmation hearing, the United States will consider working with Russia when we can find areas of practical cooperation that will benefit the American people,” Tillerson said.

“Where we do not see eye to eye, the United States will stand up for the interests and values of America and her allies. As we search for new common ground, we expect Russia to honor its commitment to the Minsk Agreements and work to deescalate the violence in the Ukraine.”

The Trump administration has found itself in a rut with Russia since Michael Flynn resigned from the National Security Council due to not telling Vice President Mike Pence the truth about his conversations with a Russian ambassador.

But hopefully these comments from Mattie and Tillerson quell some of that concern.

How about elevate them?

Mattis in particular needs to shut up .

His brief is to restore the depth and elan of the US military, not display the ignorant, reflexive
anti-Russianism of the US officer corps.

What may have happened in various elections is none of his affair.