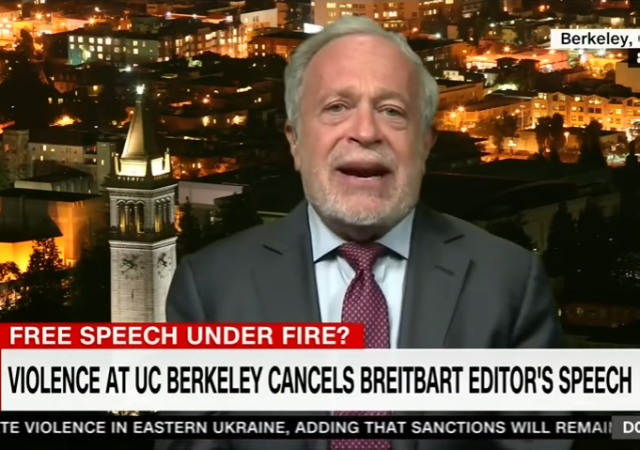 If you’ve been paying attention for the last few days, you may have noticed a concerted effort by many liberals to suggest that the “Black Bloc” protesters who showed up at the Berkeley riots are not part of the progressive movement.

That suggestion is absurd. These folks are part of the Democratic Party’s base. They showed up in Ferguson, Charlotte, Baltimore, the inauguration and now Berkeley.

The most laughable attempt to distance liberals from this mob however, came from former Labor Secretary and Berkeley professor Robert Reich, who suggested on CNN Thursday night that the rioters were right wingers.

Mediaite has the details:

“I was there for part of last night, and I know what I saw and those people were not Berkeley students,” Reich said. “Those people were outside agitators. I have never seen them before.”

“There’s rumors that they actually were right-wingers. They were a part of a kind of group that was organized and ready to create the kind of tumult and danger you saw that forced the police to cancel the event,” Reich insisted. “So Donald Trump, when he says Berkeley doesn’t respect free speech rights, that’s a complete distortion of the truth.”

The fact that Don Lemon would take such a suggestion seriously is just further evidence of how far CNN has fallen. Watch the whole clip below:

Reactions to Reich on Twitter were just what you would imagine. Via Twitchy:

Me, when CNN says the #Berkeley rioters were 'right wing' pic.twitter.com/xSdre6rHmD

Right, they were bussed in from Texas on the Koch brother's dime. lol dopes https://t.co/pCbzhsZuRI

Watch soon for the burst of gamma rays as Hivemind Media’s credibility falls thru the event horizon & into a black hole. #tcot https://t.co/6LTzSwS06f

Not surprising. @donlemon once postulated an airplane was swallowed by a black hole. https://t.co/Vboue49U4X

Has the Left become so overwhelming arrogant that they actually think we would believe this nonsense?

notamemberofanyorganizedpolicital in reply to Cleetus. | February 4, 2017 at 6:33 pm

That is Robert Reich III, no?

If that fantasy were true the CA authorities would have, by now, already arrested and waterboarded the miscreants.

Let’s pretend for a second, just for the sake of the argument, that it’s true some rioters were plants.
I did not see any of the “legitimate” left wing protesters demanding that the “plants” stop the violence.
To this day, the left has not even considered the idea of condemning these acts, have they?

The dishonesty is appalling!

With so much to go after with his opinions and statements, why chose his height as the thing to attack?

Anyone to the right of the commies are considered “right wing” or fascist by them. So of course this commie pig thinks these anarchist protesters are right wingers.

One anarchist rioter has been outed and he works for UC Berkeley! Here’s the link:

Yes, Robert Reich has it all going on, ya know?

I saw that this morning! I wonder why this isn’t all over the web yet? This can’t be buried although the MSM will surely ignore it.

Everyone and their uncle knew about the Mad Cow roaming in the Clinton White House but I had no idea of the early onset Dementia beleaguering the men.

From the BLM riots we learned that these “protesters” record everything with their Obama phones. So why don’t they have recordings of the actual violence and those responsible?

Note: please don’t answer, the question is rhetorical, meant to to be asked of Reich.

One thing we know for sure and that is if Reich was actually there he couldn’t have seen anything since he is a midget. He would’ve been able to identify the knees of the black-clad figures but not much else!

In the abstract, the basic proposition is not absurd.

If the Socialist Assault On America is under intelligent direction, then it is unlikely to have launched the Berkeley and New York episodes, because such bad PR can’t benefit it, and can only damage it. They’re evil, but not totally stupid. Well, not all of them.

But, if there is an Alt.Right which is also under intelligent direction, it would have both opportunity and motive to launch these attacks, knowing that the Socialist Assault would be blamed.

That part’s all logical enough. The clue that even Reich knows it’s all rubbish, though, is that his statement is just a doily—an artful construction of holes.

Those people were outside agitators. I have never seen them before … Well, most of us have never seen a bunch of unrecognizable masked people before either, so this statement is pretty safe … there’s rumors … which he just made up … that they actually were right-wingers … appropriately vague … a kind of group that was organized and ready to create the kind of tumult and danger you saw that forced the police to cancel the event … but a Leftie could do that as well as anybody … So Donald Trump, when he says Berkeley doesn’t respect free speech rights, that’s a complete distortion of the truth … if his “blame the victim” story is considered solid fact.

Nothing there; a blizzard of speculative fluff. The logic is all right, but nothing at all ties it to reality.

The other problem is that we’ve yet to see any evidence that there are any Right groups, or even individuals, on today’s political scene who engage in systematic mayhem. If Reich knew of any such, he’d have used it to back his theory, and he’d have to, because he has nothing else.

But he’s just doing his job … fling a pile of **** and hope that something sticks. The usual tactic.

Anarchists serve at the pleasure of the Left. The militant wing of the DNC reimagined.

It was the Spanish Inquisition. Why? Because nobody expects……..

These fools/tools are so disingenuous they may really believe their own crap. Ever wonder where low/no information voters came from? I rest my case.

Bob. Get help. Please. You used to be somebody that half of the country respected. Now, you’re going to be lucky to get half of the asylum.

Let us construct a theoretical exercise about the Berkeley riots. Suppose that the police were to have, at some point, simultaneously shot dead every hood-clad thug holding a weapon, and then lined the bodies up for identification in the morning, much the same way bank robbers and such were treated in the Old West.

A quick perusal of their social media accounts, wallets, and other such indicators of political and social bent would have, I’m fairly certain, turned up zero evidence of any Republican leaning in their political outlook, although there may have been several unhappy Republican parents who the press would be happy to catch mourning their misbehaving offspring. To the credit of the Democrat party, I’m fairly certain few if any of the bodies would be registered to vote, although there might be a few ex-Bernie voters in the pile.

As I said, this is entirely a thought exercise. However, these a——s better not try this (censored) in Texas.

As has been opined on other venues;
It’s unlikely that violent protests like this ever will be seen in Texas, Arizona and several other states as well, and for precisely the reason you’ve put forward.

Seems these people (or their financiers) aren’t that stupid, but only time will really tell.