A waste of billions of dollars. 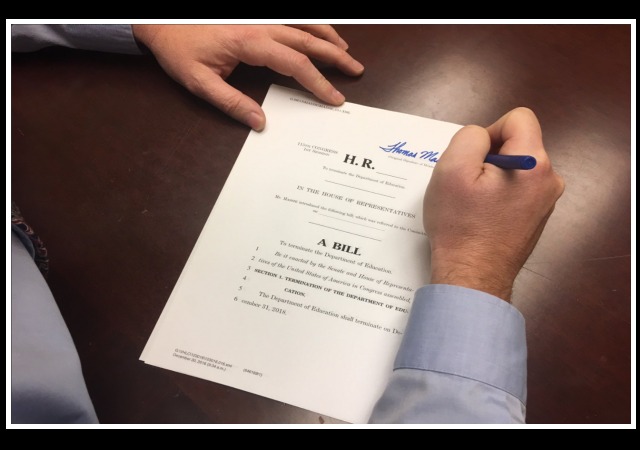 Rep. Thomas Massie (R-KY) may have introduced the shortest piece of legislation when he handed in a bill to eliminate the Department of Education.

I just introduced a bill to abolish the federal Dept of Education: https://t.co/hcYr2QzIfI #EndFedEd

Weirdly enough, he submitted the bill on the same day the Senate confirmed Betsy DeVos as Secretary of Education.

That’s right. All the bill says is, “The Department of Education shall terminate on December 31, 2018.”

In a statement, Massie said:

“Neither Congress nor the President, through his appointees, has the constitutional authority to dictate how and what our children must learn.”

Massie added, “Unelected bureaucrats in Washington, D.C. should not be in charge of our children’s intellectual and moral development. States and local communities are best positioned to shape curricula that meet the needs of their students. Schools should be accountable. Parents have the right to choose the most appropriate educational opportunity for their children, including home school, public school, or private school.”

He is 100% correct. When I covered Common Core at Breitbart, I spoke with many state legislators and so many of them on both sides of the aisle stated that education should be as local as possible.

President Jimmy Carter (because of course it was him) established the Department of Education as a debt to the National Education Association, the largest labor union. The group endorsed him, its first ever endorsement, “when Walter Mondale promised them, at an NEA annual meeting, that the Carter administration would form an education department.”

President Ronald Reagan tried to dissolve the department, but unfortunately it never happened.

Massie has support from other House Republicans:

Here are a few statements:

“For years, I have advocated returning education policy to where it belongs – the state and local level,” said Rep. Walter Jones, an original co-sponsor. “D.C. bureaucrats cannot begin to understand the needs of schools and its students on an individual basis. It is time that we get the feds out of the classroom, and terminate the Department of Education.”

“I’ve always been a proponent of empowering parents, teachers and local school boards who best know our children and their needs,” said Rep. Raul Labrador, another original co-sponsor. “Eliminating the U.S. Department of Education is the most important step we in Congress can take in returning decision making to the local level.”

“Education of our students should lie primarily with parents, teachers, and state and local officials who know how to meet their individual needs best,” said freshman Rep. Andy Biggs. “Since its inception, the Department of Education has grown into an unrecognizable federal beast, and its policies have helped foster Common Core across the country. It is time the one-size-fits-all approach by the federal government is ended and authority is returned to the local level.”

Energy and Education? Carter really was the worst…at least until 2009. This is exactly what we should be doing for our children’s future. Perhaps with a highly unpopular Secretary DeVos, enough Democrats will jump on board and let states raise their own funding and write their own curriculum for their own students.

If the states don’t have to deal with unfunded mandates, then perhaps they would have enough funds to improve their schools.

From his pen to God’s ears.

— and The Donald’s signature.

There should be a logical review of many federal departments, but what has taken many years to build up cannot be dismantled in a mere 22 months.

Regulations may be easy to overturn, but the laws that helped to establish those regs need to be reversed. Otherwise, the next time the Ds have the power, they will restart everything.

I hope that the same critical review will be going on at all departments with the elimination of most regs and specific functions going back to the states. But, what remains has to be organized and placed in the correct place. It won’t help one department that is trying to clean house to be handed the responsibility of another messed up function.

Besides consolidation of many departments into one larger one without a good plan makes the new department even worse. See Department of Homeland Security.

It would help if the President issues an Executive Memo telling GAO to sell all excess federal buildings and equipment. If they can’t find a place to sit, then maybe they won’t be able to do any work!

Democrats have an interesting choice – they can oppose this and let DeVos turn it into the Dep’t of Charter Schools and Home Schooling, or oppose her and support dissolving the agency completely.

Now THAT is what I call a win-win situation for our side!

Politics is a chess game. The Dems are now in the uncomfortable position of moving their king and falling into a Queen-bishop checkmate in two moves, or pushing a pawn and losing to a two-rooks checkmate in three moves.

I find it interesting — and somewhat amusing — that so few Republicans play the political chess game well, and that non-politician Trump is smoking them at it.

notamemberofanyorganizedpolicital in reply to Archer. | February 8, 2017 at 8:53 pm

RE: “They’re hosed either way.”

Got to love it!

The GOPe is not about winning – just saving their asses.

They stand for nothing and will take the easy way out or stab their base in the back at every turn, so long as it keeps their paychecks. Boehner was the epitome of their fecklessness and corruption.

I’m often appalled by the love of false dichotomy I see here.

It’s just silly to think that your “either-or” formulation is real-world.

DeVos MAY be very pro-choice in terms of primary and secondary education, but that will mean very little at the school-district level. Sure, she could reverse some of the bad dictates from the ED. bureaucrats in DC, but she’s not going to change the Chicago, LA, Boston, etc. school districts. They’ll ride out whatever comes. They have enormous motivation to do so.

AND the Collective knows what a powerful tool they have in the Dept. Of Ed, so they’re NEVER going to just let it go because there MAY be someone in office who MAY last a few years and MAY stick to her guns.

The “either / or” dichotomy is perfectly valid in the field of public perception, which is the battle we’re fighting right now.

The reality is that the Dep’t of Education does absolutely nothing for any child or school district in this country, never has, never will. The Dep’t of Education is a federally funded slush fund that Administrations use to hand out undercover cash to their political friends and deny it to their political enemies. In a world of corruption, it is one of the most thoroughly corrupt and useless governmental bodies in existence today, and there is no hope whatsoever that it will be anything other than that. (Note how THIS is the agency that the Democrats decided they had to try to maintain control of above all others)

This has gone on so long that it is virtually pointless to rail against it – we live in a society where nobody really cares about corruption anymore, just like in South America.
What I find to be a stroke of genius is how Trump keeps coming up with ways to use the system’s corruption against itself. Kind of like Mr. Incredible realizing that the robot monster is so strong that nothing can defeat it, except itself.

I suggest that the States of CA, MA, IL and any others educate their citizens as they see fit. It is NOT the role OR responsibility of the Federal government to provide and MANDATE the content of education in the several States of the United States of America.

Long overdue. The federal Department of Education should never have existed in the first place, education being the exclusive province of the states.

However, there are plenty of areas within DEd for cleaning.

$69.4 BILLION!? For what? To push “gender equality” and “transgender rights”, and punish boys’ sports teams through endless Title IX complaints?

Oh, yeah, and to send armed SWAT teams to break down doors and “arrest” people over unpaid student loans?

This might be devilishly clever. The Left might decide that no DOE is better than a DOE headed by DeVoss.

DoEd was always a crappy solution in search of a problem. Education has deteriorated steadily & drastically since its creation, especially at the college level where it spends to bulk of its slush fund. It needs to go, lock, stock & barrel. Speaking of barrels, that it has its own ARMED enforcement division is just scary, not to mention absurd.

I’m going to have to disagree on this one…now if you remove “state and local officals” it would be a great start to limited Grubernment!

Should have been called the Department of Re-Education.

Dept of Ed is a good begin point. Next the Dept of Energy, be gone. USDA FS, USDI Park Service and BLM, USGS Bio Survey rolled into a single Dept of Nat Resources and reduce staff by 50%. I would propose job stay limits on all FED employees, no exceptions. Regardless of age, class or color NO-ONE should be allowed to hold a FED job for longer than 10 years (roughly a quarter of one’s productive career life). After 10 years service they MUST return to work in the private sector….no lobbying, no govt contracts and no job with anything the least bit affiliated with Gov’t….NO EXCEPTIONS! If everyone realized that within a determined period of time they would have to be working on the outside, they’be be a whole lot less inclined to pass all these BS laws, rules and regs. It would become unpopular to work in a Gov’t job, self shrinking Gov’t. Same goes for academia. Kill the bureaucracy!