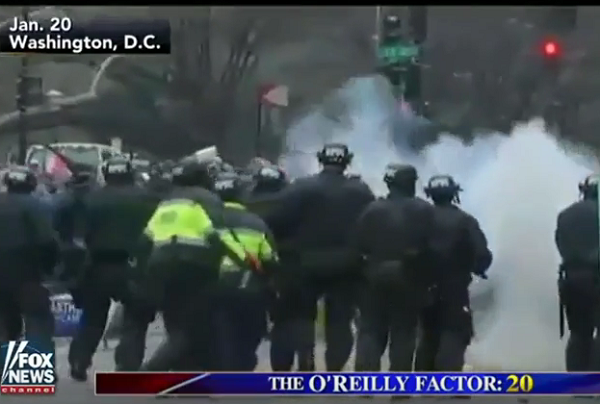 The total of those indicted on felony rioting charges is now 209.  A total of 230 persons were arrested in conjunction with the rioting, and twelve of those cases have been dismissed.

A grand jury has indicted more than 100 Inauguration Day protesters on rioting charges in Washington, D.C. In total, 209 people have now been indicted.

The indictment, handed up D.C. Superior Court on Wednesday, charged 146 additional protesters with felony rioting — meaning they face a fine of up to $25,000 and a maximum of 10 years in prison.

DC police have requested that Facebook turn over social media information on the violent rioters.

The Washington D.C. Metropolitan Police Department is demanding that Facebook hand over information it has on several protesters who were demonstrating against President Donald Trump’s inauguration last month.

The U.S. Attorney’s Office for the District of Columbia issued the subpoena to Facebook on Jan. 27, according to CityLab, a week after the official swearing-in ceremony.

It’s not clear if the information is being sought to strengthen existing cases against the violent rioters or to identify further individuals for charges (or both).

Police and prosecutors seem to need more information for the alleged perpetrators, specifically data on the social media platform, to either build a better case against the defendants or charge more people with crimes.

D.C. police are accused of seizing the phones of the people they arrested in order to search for evidence, according to The Verge. But authorities can request data from Facebook that they are unable to directly access themselves.

“A valid subpoena issued in connection with an official criminal investigation is required to compel the disclosure of basic subscriber records,” one of Facebook’s law enforcement guidelines reads. Requested records “may include: name, length of service, credit card information, email address(es), and a recent login/logout IP address(es), if available.”

Treat these rioters the same way they treat other criminals.

Give us the names of the higher ups and you get a better deal.

Soros, Podesta etc would eventually be the names they name – and then we can indict the real bad guys.

This is a good start. Let’s hope it catches on.

Sounds like the Feds could start using RICO around the country to squash this organized crime. Go all the way to the top.

I read the article…..once one gets past the obligate “language”…. The five elements listed to be a “Righteous” RICO case are all there. Sorry…the answers is “yes”!

These are not spontaneous or local, but organizationally planned cross-state lines/national acts which include crinimal activity such as intimidation, criminal trespassing and destruction of property both private and public.

Hire Sherrif Joe, and make part of their setence working in a tent city building the wall.

Now go after Soros for conspiracy and sedition.

Then catch-up by indicting Lois Lerner for her bad acts with the IRS, and Al Sharpton for tax evasion.

notamemberofanyorganizedpolicital in reply to TheFineReport.com. | February 11, 2017 at 4:52 pm

Don’t forget the Holder and the Lynch.

So it sounds like at least half of these genius took photos or videos of themselves while committing crimes. I love how technology makes dumb criminals to be even dumber.

notamemberofanyorganizedpolicital in reply to tyates. | February 11, 2017 at 4:51 pm

Remember why I said the cops let these guys go so they would build their own case against themselves.

Told you guys so.

There’s a moral to this story. If you have a friendly relative or good kid who gets swept up in something like this, make sure they know they have the right to remain silent on social media.

Unfortunately, not many of them have the ability.

A good start. Now we just need to get police in California to enforce the law–look at Berkeley, 0 arrests during a riot with hundreds of criminals.

notamemberofanyorganizedpolicital in reply to VladimirPutin. | February 11, 2017 at 4:50 pm

Arrests should start at the top.
Jerry Brown perhaps?

Shouldn’t these people be prosecuted for terrorism? Violence and intimidation aimed at effecting political change is the definition of terrorism.

Actions have consequences. A little law enforcement and jail time will go a long way to restoring order in our country.

I saw the NBC report earlier. Nice to see the SJW’s finally paying a price for criminal behavior instead of having it swept under the rug.

Now, start fining organizations that leave behind mountains of trash…

I’ll let you in on a little secret. LEOs love to enforce the law. Looks like they’ll get the chance during the next four years.

“I’ll let you in on a little secret. LEOs love to enforce the law. Looks like they’ll get the chance during the next four years.”

Yes. But will a DC jury convict?