WE WANT A NAME 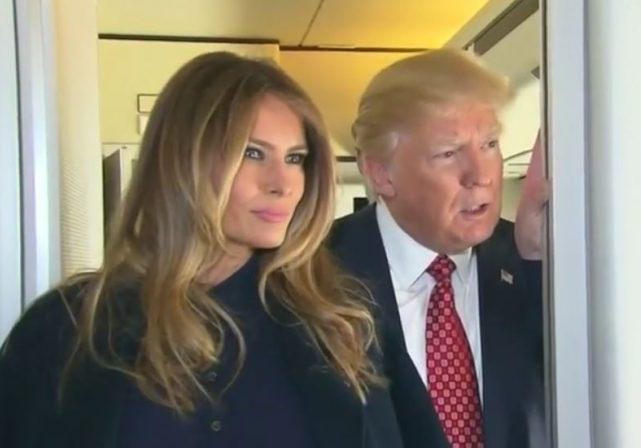 A yet to be identified New York Times reporter was formally reprimanded by the paper for calling the First Lady a “hooker” at New York Fashion Week event Saturday night.

According to Page Six, a supermodel sitting next to this nameless reporter “spilled the beans” and railed against the “slut-shaming” of Melania:

Supermodel Emily Ratajkowski, who was seated next to the reporter during the event on Sunday, had spilled the beans on Twitter.

“Sat next to a journalist from the NYT last night who told me ‘Melania is a hooker,’” Ratajkowski tweeted Monday morning.

The 25-year-old stunner, a Sports Illustrated swimsuit model, decried what she called the “slut-shaming” of the first lady, a former model herself.

“Whatever your politics it’s crucial to call this out for what it is: slut shaming. I don’t care about her nudes or sexual history and no one should,” she wrote.

In a statement published in Politico, the NYT called this unidentified reporter’s remarks, “completely inappropriate.”

“At a party last night, a Times reporter who does not cover Washington or politics, referred to an unfounded rumor regarding Melania Trump,” a Times spokesperson said in a statement to POLITICO. “The comment was not intended to be public, but it was nonetheless completely inappropriate and should not have occurred. Editors have talked to the reporter in question about the lapse.”

So who was the reporter?

Sat next to a journalist from the NYT last night who told me "Melania is a hooker." Whatever your politics it's crucial to call this out for

WE WANT A NAME.

The Daily Mail is battling a defamation suit for publishing a report suggesting the modeling agency that once employed Melania was actually an escort service.

Will the feminists make an issue out of this? Or are they too busy donning hijabs?

Wait till they get a taste of the beatings from their husbands.

Of course they won’t because just like with BDS and BLM only some lives matter.

They only gave me a talking to? This “reporter” deserves to be FIRED!

But … but, I thought the leftists didn’t find anything wrong with sex at any time, for money or otherwise.

Good for this model for calling them out on it.

I would not be surprised if the “reporter” was very deliberately trolling for a story. The New York Times is sleazy, that way.

A good suggestion and one I hadn’t thought of.

Oh, the sleaze is absolutely real.

It was a shock on arriving at the New York Times in 2004, as the paper’s movie editor, to realize that its editorial dynamic was essentially the reverse. By and large, talented reporters scrambled to match stories with what internally was often called “the narrative.”

It turns out that the J Jonah Jameson character of the Spiderman comics, who was a newspaper editor that wanted the stories to fit his prejudices, facts be damned, was patterned after real life.

It wasn’t just the Daily Mail that was fighting a defamation lawsuit. This incredibly stupid NYT reporter should have known that just a week ago, the blogger in Maryland who had published these accusations was forced to pay a financial settlement and state publicly on his site that there was no evidence for any of these accusations, and that he knew there was no evidence for them when he put the story online.

Whatever your politics it’s crucial to call this out

Correct, it’s hardly “calling it out” if the perp is protected by anonymity.

notamemberofanyorganizedpolicital in reply to tom swift. | February 13, 2017 at 7:13 pm

Oh I think it is easy enough to find out who the NYT slanderer was.

There will be dozens (if not more) photos of the event with the model in attendance. Plus only certain NYT “journalists” and their fellow journalist travelers would have been issued tickets and then gone to that event.

“Editors have talked to the reporter in question about the lapse.”

Which means a lot of high-fives were exchanged, along with ‘attaboy!’ ‘good job!’ and ‘nailed it!’ from his editors.

notamemberofanyorganizedpolicital in reply to rinardman. | February 13, 2017 at 7:25 pm

They won’t feel that way when the “journalist” is revealed and the NYT is hauled into court.

They think they still live in the dark ages perhaps………..

From what I’ve seen of the feminists a paper bag would be better than an hijab.

It is time to play the libel card. File suit against the NYT and this reporter. No more Mr Nice guy. Hardball from here on out.

I don’t care what anyone thinks of Trump but he sure as hell brings out internal asshole in liberals (and some “conservatives”).

One lawyer poster here at LI, even defended Beck

Oh, you must mean Rags…

This is my shocked face….

That’s funny, I had missed that about Beck. It’s always interesting to see how some men cannot handle the presence of a beautiful woman who’s completely confident in her own sexuality. A woman like that drives most muslims completely insane (not that it’s a long trip for them), and apparently Beck, too.

I love this : “The comment was not intended to be public”
Neither was Donald Trump’s “grab em by the p*ssy” remark, but we know what happened there..

Good for Miss Ratajkowski for coming to the defense of the First Lady.

” Not intended to be public?” He was there as a reporter and he said this to the model, who is public figure

Something tells me the person would be tarred and feathered in the streets were it a conservative.

For a whore like the NY Times to call anyone a ‘hooker’ – isn’t that the epitome of the pot calling the kettle black?

And if Melinia was a hooker, who would your patronize, her or the NY Times?

There are so many descriptive terms we could hang on her and the NYT, and they would probably be similar and at worst, be based on truth.