We blog, you decide

For all the hubbub over “fake news”, major news outlets are making a name for themselves peddling misinformation and inaccurate reports.

Here’s how the NYT ran the story: 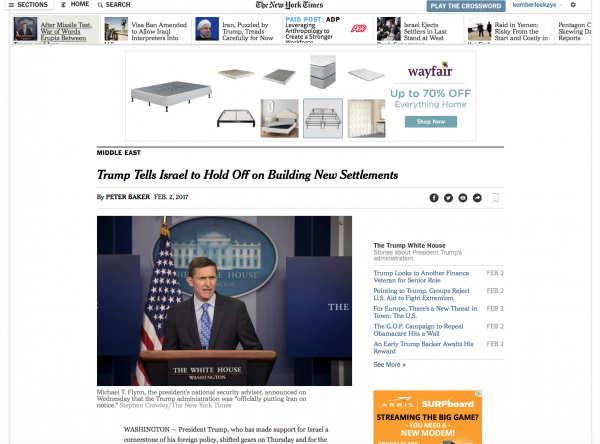 Sounds like Trump told Netanyahu to back off, right?

Here’s the first part of the White House statement:

“The American desire for peace between the Israelis and the Palestinians has remained unchanged for 50 years. While we don’t believe the existence of settlements is an impediment to peace, the construction of new settlements or the expansion of existing settlements beyond their current borders may not be helpful in achieving that goal.”

“May not be helpful” is hardly “telling Israel to hold off”. And yet…

“As the President has expressed many times, he hopes to achieve peace throughout the Middle East region. The Trump administration has not taken an official position on settlement activity and looks forward to continuing discussions, including with Prime Minister Netanyahu when he visits with President Trump later this month.”

No official position. None. But Trump told “Israel to hold off.”

English is hard. So are facts, apparently.

The NYT Updated the headline to read as follows: 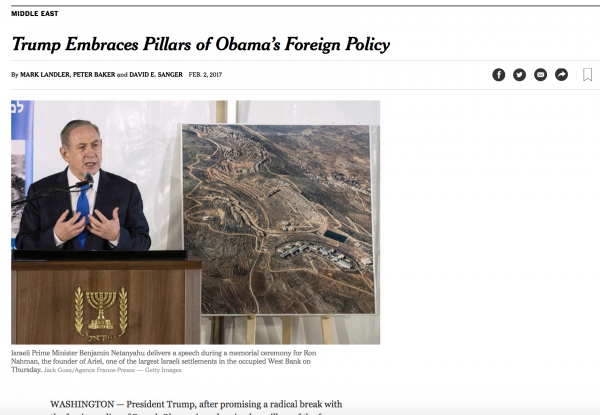 Looks like we’re not the only ones who think so:

It goes far beyond Bush letter, in that no limitation to "blocs," rather embraces all existing settlements. https://t.co/qFk2Fk4Ide

This is huge. Endorsement of '04 letter. Reversal of Obama https://t.co/67mEoAqKKB

English are harder in math.

Bannon know it’s war with the NYTs/Hollywood/Academia/MSM/Democrats/& some Republicans. That the Trump administration is ready to fight back scares them most of all – it forces the loony Left into greater spasms of bad behavior & violence.

The Left is completely off balance by the Trump Blitzkrieg. So, CNN and MSNBC rush to man the media’s Maginot Line.

Man these folks need to hire some of the old folks that helped run Pravda back in the 80’s, because so far they suck at this propaganda stuff.

Quotes that do not quote.

Everything they print is either a lie, or an accident.

Their lies are never accidents.

Read my sentence again, with special emphasis on the conjunction “or”, and see if you can figure out what it means.

“Trump Embraces Pillars of Obama’s Foreign Policy”? Huh? Obama’s foreign policy never exhibited enough firmness to be called a “pillar”. Rather more like a “pillow” when it came to projecting strength.

“A pillow of strength”? Sounds like something Yogi Berra or Norm Crosby would say!

WASHINGTON – The White House warned Israel on Thursday – in a surprising statement – to cease settlement announcements that are “unilateral” and “undermining” of President Donald Trump’s effort to forge Middle East peace, a senior administration official told The Jerusalem Post.For the first time, the administration confirmed that Trump is committed to a comprehensive two-state solution to the Israeli- Palestinian conflict negotiated between the parties.

Notice he didn’t tell Israel not to build settlements, only to stop announcing it. In other words, build all you want, but shut up about it.

The San Diego Union-Tribune has a national news section that is mainly reprints from articles from the AP, Washington Post and New York Times. The articles carry the bylines of reporters that “write for” the New York Times sound like they were written by the DNC, or the now-defunct Clinton Campaign.

Of course, we now know that the New York Times passed its election-related articles by the Clinton Campaign for approval before publishing, a major departure from the purported normal news-publishing process.

I think that if any such article is sponsored (paid for) by any entity other than the New York Times, it is unethical to fail to disclose such financial ties.

Besides the NY Times, add Neiman Marcus and Norstrom’s to your boycott list after they dropped Ivanka Trump’s clothing line: