“Not My President” Protests Across Country Fizzle

“Not My President” Protests Across Country Fizzle

Short on substance, high on hype 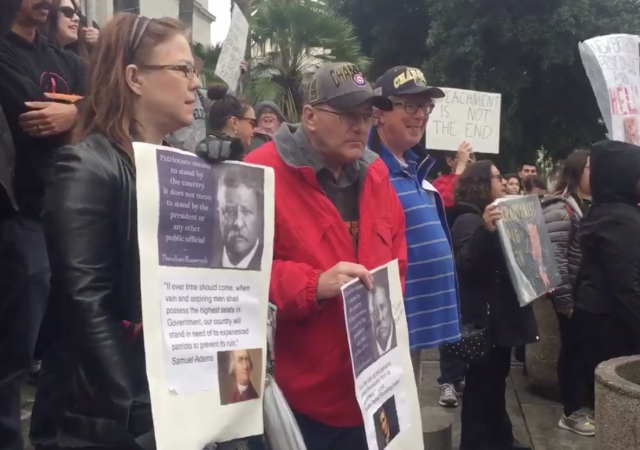 Organizers across the country put together “not my President” protests which took place Monday — President’s Day.

A schmorgesborg of complaints, few actually related to anything President Trump has done, these protests were meant to highlight the so-called “resistance” movement.

CBS News interviewed protesters at various locations. Some of their concerns:

“I’m upset … I am very concerned and I would like to see a return to rational reasonable policies based on fact, facts that are not up for debate,” said Chris Webber.

“There is hatred among different races, separation of races, it needs to stop, we need to find a common good and work together to preserve the United States,” said June Martinez.

“I don’t want to see the country sold to the highest bidder. I want to see a system, something like a change in the system that Martin Luther King talked about, that we change the country, the system, that people are treated fairly no matter what station is in life,” said Bronson.

Outside Central Park in Manhattan, thousands of flag-waving protesters lined up. Many in the crowd chanted “No ban, no wall. The Trump regime has got to fall.” They held aloft signs saying “Uphold the Constitution Now” and “Impeach the Liar.”

In Atlanta, dozens marched through midtown for a rally named with a Georgia flavor: “ImPEACH NOW! (Not My) President’s Day March.”

For about 20 minutes, protesters had been given verbal warnings to clear the street. Some did, while others kept blocking traffic. Police initially arrested three people, according to KOIN, and at least five others were arrested about 10 minutes later.

Another rally was held midday in Portland and was peaceful, KOIN reported. Both groups were protesting the Trump administration.

The protests which promised thousands failed to produce mass amounts of protesters. There was no cohesive message, just a general tone of disapproval towards a president who has only been in office one month. This “resistance” movement might lend itself more credibility if they centered around a particular policy or even waited until Trump has done something worth protesting. Alas…

The delusion surrounding the “not my president” mantra is strong. Trump doesn’t have to be liked or even respected, but it doesn’t change that he is, in fact, the president.

Never forget: These blithering idiots, the people that support them, and the people they support, want control over every aspect of your life.

They want to tell you where to live, what to eat/drink, how and where you spend your money, what your children are taught, how much you are taxed and how that money is spent, and on, and on, and on…

…and want to ability to lecture you about how terrible you are while you dare not speak back lest you be labeled a heretic and shunned from their presence.

They fail to consider that those that they would shun might shun them back .and that that shunning might have consequences.

Americans of every kind now believe that whatever they are unhappy about is the fault of someone else instead of their own. Here it’s the brand new president, but regardless these same people would protest something and place anger and blame on someone else. Many are kids but a lot are adult children also. It’s hard to really care anymore especially when they’ve no message and don’t really know why they’re there.

They held aloft signs saying “Uphold the Constitution Now” and “Impeach the Liar.”

What, are they just running late?

Comedy is not dead! These people make my day.

So suddenly Bush is one of their presidents?

According to the Lamestreams this was a tidal wave, a veritable tsunami of righteous citizens demanding their representatives… do… something. Or… not do… something.

I think we should accord them the same degree of attention and respect the Democrat Party and its representatives, and the GOPe, accorded the Tea Party protests.

There those “malcontents” go off again.

Complaining and protesting about President Obama.
Why Barrack was the best President Kenya ever had!

Walker Evans in reply to notamemberofanyorganizedpolicital. | February 22, 2017 at 12:47 am

I believe you’re confusing Indonesia , where little Barry was adopted by his mother’s husband and thus became a citizen of that country, with Kenya, the country where his sperm donor originated. Easy mistake to make under the circumstances.

BTW, Indonesia does not recognize dual citizenship so little Barry would have been legally stripped of any U.S. citizen status by Indonesia when the adoption occurred.

These people are all about A.S.S. Acquired Stupidity Syndrome The first symptoms were observed approximately 9PM November 8,2016

If they have not renounced their U.S. citizenship he damn well IS their President! The fact that they don’t like him is totally irrelevant.

If you had told me thirty years ago that a large segment of American society could have transformed so quickly into a state of permanent childhood, I would have laughed. I’m not laughing now…

Best. Election. Evah! Even my 8 year old daughter can see how fake these people are. Too bad they aren’t smart enough to at least wait until he does something to offend them, other than beat the pants suit off Hillary! (I apologize for any hideous mental images that statement may generate…)

“I want to see a system, something like a change in the system that Martin Luther King talked about, that we change the country, the system, that people are treated fairly no matter what station is in life,” said Bronson.”