No NCAA Bracket for Trump

No NCAA Bracket for Trump

Trump will pass on March Madness 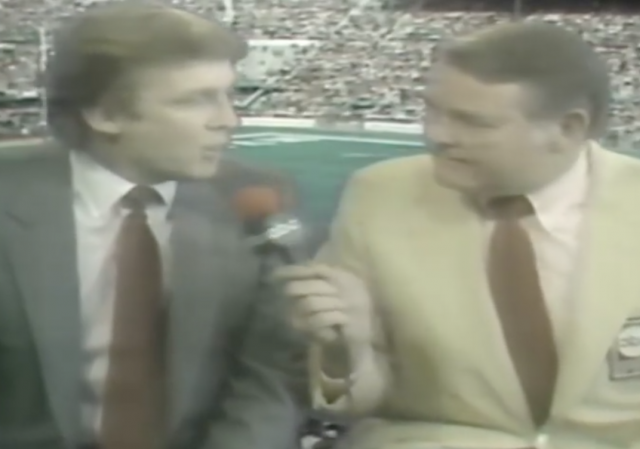 Every year, President Obama filled out a NCAA bracket on ESPN.

President Trump will not continue his predecessor’s tradition.

The network reached out to Trump’s staff and invited the president to fill out a bracket on-camera, just as President Barack Obama had the past several years. The network recently received word that Trump has passed. An ESPN spokesman said in a statement: “We expressed our interest to the White House in continuing the presidential bracket. They have respectfully declined.”

White House spokeswoman Hope Hicks said in an email to The Washington Post: “We look forward to working with ESPN on another opportunity in the near future.” Neither the White House nor ESPN had any details on what other opportunities might lie down the road.

The news didn’t exactly come as a surprise to ESPN executives. They knew with a change of president, the annual feature might not continue. Obama hosted an ESPN crew each March and filled out brackets for both the men’s and women’s tournaments. Two of those brackets are now property of the Smithsonian’s National Museum of American History.

A spokesman told The Post in December that ESPN would extend an invite Trump to continue the tradition, but Andy Katz, the ESPN basketball analyst who conceived the idea and walked Obama through the bracket explained at the time that “the bracket idea worked because President Obama follows basketball and is passionate about the sport.

“He wasn’t as dialed in to every player or team but had conversational knowledge to offer his own analysis on the NCAA tournament for the men’s and women’s game. Baracketology was a success because it was clear he was a fan of the sport and the NCAA tournament, like millions of other Americans,” Katz said.

Trump’s sports interest aren’t on the wood, rather the President prefers baseball and football.

In 1983, Trump purchased the New Jersey Generals, a team in the now-defunct USFL.

Most recently, Trump was blamed for “roiling the world of sports,” even though he’s no longer directly involved in sports.

If Trump also dumps that foolishness about pardoning the turkey on Thanksgiving, he’ll have gone quite a way towards MAGA.

That man has a job to do, and this childish crap ain’t it.

notamemberofanyorganizedpolicital in reply to tom swift. | February 17, 2017 at 4:52 pm

Did President “Peanuts” Carter start that with the turkey?

(Sorry for the accidental thumb down) If DJT turned all the ceremonial stuff over to Pence that would be fine. And the State of the Union? Send a written report like they used to.

Although State of the Union helps him go over the heads of the media.

What’s the over/under on Democratic booing, jeering, and walking out during President Trump’s first SOTU?

notamemberofanyorganizedpolicital in reply to Granny. | February 17, 2017 at 6:24 pm

Agree, he should not pardon Hillary Clinton on Thanksgiving – nor any other day.

When is the indictment coming?

notamemberofanyorganizedpolicital in reply to TheFineReport.com. | February 18, 2017 at 2:13 pm

You are missing a perfect opportunity here. This year, pardon a *female* turkey named Hillary and watch the Liberals’ heads explode.

MY Bet: Obama will do it again…

Obama’s wasting time on the NCAA bracket is not a “tradition,” thank God; it was just another way for Obama to place himself at the center of attention. And it wasn’t just March Madness time, either. As I recall, Obama admitted he spent a lot of time watching Sports Center (no wonder; ESPN has become so PC I find it nearly unwatchable).

So glad Trump is skipping this sort of stupid, non-presidential stuff. The friggin’ world is on fire.

“Two of those brackets are now property of the Smithsonian’s National Museum of American History.”

Fire the idiot(s) in the Smithsonian who did that!

Well, they are artefacts of a failed presidency….

“Every year, President Obama filled out a NCAA bracket on ESPN.”

That my dears, is the epitome of stupidity. Bless his little heart.

Lol ESPN is a wasteland of politically correct buffoons.
And here you have the NFL trying to blackmail the State of Texas over bathrooms for trannys.

You can not make this sh$t up.

Maybe Jake Snapper will tell Obama to “get to work” too & “quit whining”.????

I don’t have any problem with a US President enjoying and commenting on sports that interest him. For Trump, golf, baseball and football might or might not appeal.

Or, he could just ditch it.