“This is absolutely disgusting.” 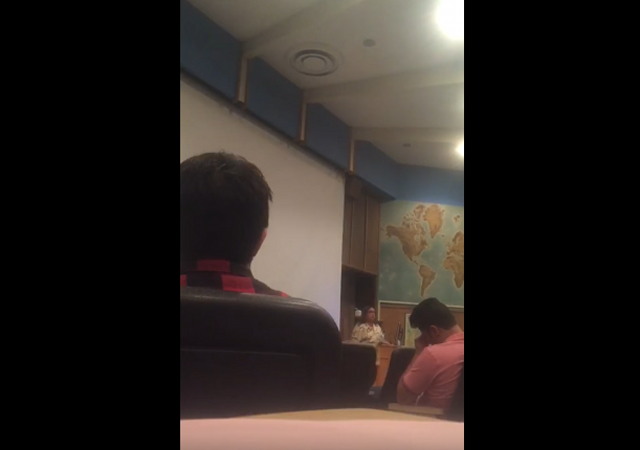 We covered the rant with video in a prior post. The editors of the OC Register are sticking up for the student.

Check out this editorial:

Orange Coast College has turned its back on academic freedom and integrity with the suspension of Caleb O’Neil for recording Olga Perez Stable Cox, his human sexuality instructor, who made incendiary comments about the election of Donald Trump and his supporters during class.

The school should reinstate O’Neil immediately.

The controversy has become national news. “O’Neil videotaped Cox as she called the election of Donald Trump ‘an act of terrorism’ and declared that those ‘leading the assault are among us,” according to Register reports.

The student is being punished because the recording goes against Coast Community College District rules about recording on school grounds without consent from those being recorded.

To add insult to injury, the school has required O’Neil to write a letter of apology and a three-page essay explaining his decision to record Cox, share it publicly and discuss “the impact of the video going ‘viral’ and the ensuing damage to Orange Coast College students, faculty and staff” before being allowed to return to classes.

This is absolutely disgusting. And every advocacy group and political organization in Orange County and beyond should organize against OCC.

Most top-ranked colleges and universities encourage their students to tape the lectures and later use the tapes for review. This community college is punishing the student for making his instructor look like a bigoted idiot, which reflects badly on the college. But if the college didn’t hire and promote bigoted idiots, it wouldn’t have to penalize students for putting out the truth.
The only reason to forbid students to tape lectures is because you’re ashamed of what those lectures will show about your instructors.

If this were some lib recording a private meeting of conservatives, the medial would praise them endlessly, but let a kid who is recording a lecture he/she paid for, and they condemn them. Media bias? Nothing to see here… /sarc