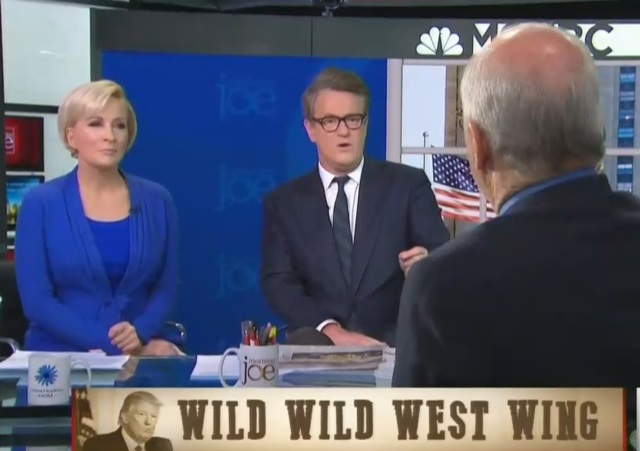 Has Mika Brzezinski been binge-watching House of Cards? The question arises because on today’s Morning Joe, she offered up a Machiavellian theory which appeared to portray Mike Pence as scheming to take over the presidency.

Joe Scarborough asked who within the White House will go to President Trump and tell him that he’s undercutting his credibility. When Mark Halperin proposed VP Pence for that job, Mika Brzezinski replied: “it’s not happening. He’s waiting to be President.” Was Mika implying that Pence has adopted a conscious strategy of letting President Trump implode so that he can assume the presidency when Trump is driven from office?

Note: The opening paragraph was modified after publication to provide context.

Note segundo: Joe also said that he had spoken with many Republican senators and congressmen after the press conference. When Joe hesitated to use an expression to describe their fear of what was happening, Mika stepped in, saying they were scared “mmm-less.”

MIKE BARNICLE: The first 35 minutes of that press conference was watching a President of the United States who has lost his grip on reality.

JOE SCARBOROUGH: And everybody I talked to on the Hill, including a lot of Republican senators and congressmen, were scared [pauses] —

JOE: Yes. Were scared to death by what they saw, and more than one said this just isn’t going to last long because he just doesn’t have control of reality.

JOE: So, who’s going to go to Donald Trump and say hey, listen, you’re really undercutting your credibility and this is going to catch up with you if you don’t stop lying?

WILLIE GEIST: For your own sake.

MIKA: Hmm. Not happening. He’s waiting to be President. [nervous chuckles on set]

All things said on MSNBC are Rachel Maddow’s things and only those things are allowed.

This, I want more of this, especially if I have to listen to open border rubbish from both sides. Lol, I had no problem with the press conference, especially since the American press is more like the old Soviet Pravda every day. There comes a time when some personalities need to be popped and President Trump had the pins out. So sick and tried of politicians dancing around what they want to say so as not to offend anyone that they end up saying nothing. We have Dems and Reps who are trying to solidify voting blocks by tearing down our borders and giving rights to people who don’t deserve them. Then all the hyperventilating about Russia is just embarrassing, there are reporters and media outlets that should just shut down over the pure dishonesty.

It’s almost comical to see how Joe and the rest of the press can’t admit to themselves how wildly popular that press conference was.

They call it “divorced from reality” because he’s not accepting THEIR reality, instead Trump is speaking to the VOTER’S reality.

Joe, why does the press score so low in reliability in any polls these days, worse than used car salesman? And when Joe goes on about Pence, now he’s just making up crazy sh*t because it fits into his fantasy bubble. Joe’s reality doesn’t admit the possibility that Pence agrees with and heartily supports everything Trump is saying about the lying, cheating, MSM.

Hehe and the MSM continues to go into hysterics that they can’t control this president!

Well, this show is out there,,, I don’t like it, not one bit, but it is interesting to see their swing on things…Ignoring/hiding from all the bs will not make it go away. Mark is presenting this for our consideration in a pretty impartial way. It seems he is doing blog readers here a favor. It would be easy enough to just see the post’s title, and skip right over. Personally, I get some sense of hope reading the insightful comments that are critical of the show and their opinions.

I reject their reality and go with the Donald.

I watched that press conference. These people are either delusional, or frantically lying, in hopes that their viewers are too feckless to notice. That plan did work, until a bunch of fed-up citizens decided to open their own news nodes.

Could you please stop watching Mika and Joe. These posts are tedious. 🙂

Your complaints are getting a bit tired. Just skip the post if you don’t like the topic.

keep up the reporting Mark.

I like to hear about the mentally and criminally insane occasionally.

There’s nothing different about Pence in this regard. The Vice Presidency has always been both a no-win and a no-lose proposition.

It’s no-lose because either the President does well and you can ride his or her coattails into office yourself, or something really bad happens and you get to be President early.

But its no-win because you can also be shackled to a corpse. Since the VP doesn’t have any responsibilities of their own (aside from occasional tie breaking votes), they have no way to create their own identity.

So if Trump, for whatever reason, is unpopular going into either his re-election or at the end of his second term, that lands on Pence and potentially derails his political career. So its extremely unlikely he would want Trump to fail.

I always viewed Biden as an insurance policy for Obama. No one wanted Biden to be president, so nothing was going to happen to Obama.

Likewise, I see Pence to be very involved in the administration, which is good. But, it also scares some of the Ds since they don’t like some of statements that Pence has made.

I think for Pence it’s more of a no-lose. He isn’t flashy enough to have had a big career in national politics on his own, and he had gone about as far as he could in terms of his states political scene. A lot of men with his experience go on to be University Presidents or the like, but I think his current job is a big step up from that.

I think Mitch Daniels at Purdue has been good – at least I’ve heard that he decreased costs and held tuition rates level for a while. I think he was a Republican.

David Boren at Oklahoma is a bad example of a senator & governor to U president. Of course, he is a Democrat. Kicks out kids who sang a bad tune without due process, but kept a couple of football players who beat women. He hired a Diversity VP, without proper job posting. He also pushed for an increase in the state sales tax, supposedly to pay for raises for K-12 teachers. Once you did the math, the raises were a small part of the cost. The state universities were to get about 20% of the monies with no explanation of how they were going to use it.

Back to Pence – yes he seems to be dull cf Trump, but we might be ready for a duller person to continue the process after 8 years of Trump. Of course Bush I was dull cf Reagan, but he blew his reelection chances.

notamemberofanyorganizedpolicital in reply to Liz. | February 17, 2017 at 5:33 pm

RE: “David Boren at Oklahoma is a bad example of a senator & governor to U president. Of course, he is a Democrat.”

Glad some others are noticing that also.
Borden should have resigned in disgrace years ago.
Better yet he should never have been erected as U. of O. Pres.

Joe Scarborough hit the nail on the head with this quote: “JOE SCARBOROUGH: And everybody I talked to on the Hill, including a lot of Republican senators and congressmen, were scared [pauses] —”.

Trump terrifies virtually everyone in DC, because he refuses to play by the unwritten rules. Rather than honor the establishment hierarchy and bend the knee to the long time politicos and the press, Trump seems intent upon honoring his promises to his supporters, who number ~50% of the citizenry. So, now the politicos are clustering in cloakrooms saying, “Hurrumph. Gentlemen, we have to protect our phoney-bologna jobs, and I don’t mean the pittance we receive as a salary from the government. Who elected this man as Sheriff of Rock Ridge, He has to go.” Much the same conversations are being held in newsrooms across the country.

A Trump presser is The Greatest Show On Earth.

Everybody is scared to show that movie uncut nowadays. Comedians like Mel Brooks who really did believe in free speech are “out of touch with the times”. A pity.

There is a AP story about Trump considering sending National Guard to help ICE. And of course, there are a lot of counter stories saying that the WH did not discuss it, that it was just a draft, that previous administrations (Bush and Obama) also sent Nat’l Guard to help in administrative matters.

My first thought was that it was a planted memo to see if it gets out and who was the leaker.

Rush is now talking about the Secy of State is cleaning house.

There was an article describing that the Saudis are deporting Pakistanis and calling for better vetting when they bring workers into their country.

I beginning to think I need to stop reading ANY blog that comments on these two. They say something outrageous everyday simply for attention and the clicks. By posting and commenting on their stupidity Legal Insurrection is partially responsible for perpetuating their continued in sanity. Please stop posting about them.