“The alliance remains a fundamental bedrock for the United States” 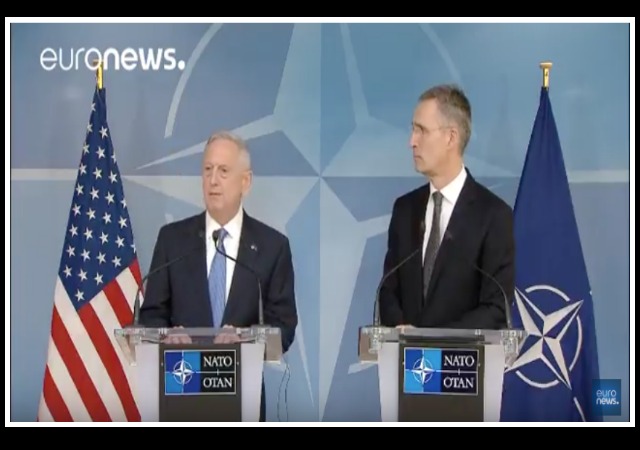 Secretary of Defense Jim Mattis has told America’s NATO allies that President Donald Trump’s administration stands behind its allies. However, he also reiterated that other members must step up in costs:

“It’s a fair demand that all who benefit from the best defense in the world carry their proportionate share of the necessary cost to defend freedom,” Mattis said.

“It is ultimately freedom we defend at NATO. I do have confidence that we will prove once again that we can react to the changing circumstances.

“We’ve done so in the past and there’s every reason and confidence that we will move out fully together once again.”

“The alliance remains a fundamental bedrock for the United States and for all the transatlantic community, bonded as we are together. As President Trump has stated, he has strong support for NATO. And NATO is in the midst of transformation. It has always been adapting to the security challenges, this is nothing new. Perhaps the pace of change has certainly picked up a bit, but this is something we can deal with.”

Out of the 23 members, only five countries have met the “recommended defense spending levels of 2% of GDP.” Of course America leads the way with 3.61 followed by Greece, U.K., Estonia, and Poland. Canada stands at 0.99.

British Defense Secretary Michael Fallon agreed with Mattis, saying that the organization “must become more agile and allies must spend more on defense.”

NATO agreed on the 2% guideline at the Wales summit in 2014. But the Trump administration considers that standard “as far too loose” and may ask for a change at the next summit meeting in May.

The need for NATO has spiked since 2014 when Russia invaded Ukraine and annexed Crimea. Ukraine has not joined NATO, but during that time, Russian officials have threatened other former Soviet Republics and satellite states that do belong to NATO. Lithuania, Latvia, Estonia, and Poland have remained concerned over their security against Russia.

Recently, Russia has set its eyes on Romania, calling the country “a clear threat” since it will host “elements of a US anti-missile shield.” Russian senior foreign ministry official Alexander Botsan-Kharchenko blasted NATO, calling Romania a “NATO outpost” and claiming that the shield threatens Russia.

The US retorted back that the shield is meant for protection from Iran. But no, of course Russia is the victim:

Mr Meshkov said Moscow was watching closely and would ensure its own security was guaranteed.

“This deployment is of course a threat for us,” he said. “And who said that it will end with this? We do not have such information. For the first time since World War Two we see German soldiers along our borders.”

Sounds to me that Russia is looking for any excuse to start a war.

Listening to the BBC this morning you wouldn’t have known ANY of this (that Trump was asking for EVERYONE to contribute fairly to NATO)!!!

The BBC merely allowed his hatred of Trump to get in the way of actually doing any of that sh1t we are forced to find them for…namely reporting the actual news!

I don’t think that the Pravda of the UK is anyone’s source for truth in reporting. It is a weathervane on their ship of (deep) state.