Seems like an important thing to be upset about

Trump adviser Kellyanne Conway was taking a photo of Presidents of traditionally black colleges during their meeting with President Trump. To do so, she was awkwardly positioned on the couch. She leaned back to check the photos she’d taken, feet on the couch. The AFP snapped a photo. And then the internet lost its mind.

Another photo in the AFP shoot shows Conway snapping the pictures, and why she wound up on the couch in the first place: 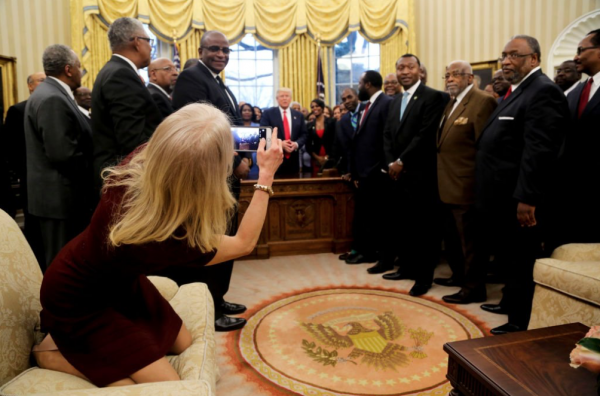 Kellyanne Conway is treating the Oval Office like her own living room. Looks like she's settling in for a night of bingewatching Scandal. pic.twitter.com/jtrrR4vVsi

I title this picture "Hidden Fences."

The same lack of respect for Black excellence that causes that mixup is what has Conway so casual. pic.twitter.com/MaAqESV8ZY

Never, in the face of white military leaders would Kellyanne Conway be on the couch, shoes off, on her knees.

Get your fucking feet off the furniture, @KellyannePolls. This isn't your home. https://t.co/12DpukKDkS

Haha. So funny. So clever!

How quickly we forget:

Hey @AssociatedPress, just found a bunch of photos of Kellyanne Conway with her feet all over the Oval Office furniture. pic.twitter.com/bqLXyq7eZc

Apparently Kellyanne Conway can't kneel on the sofa, but you can sit & eat pizza on the House floor. pic.twitter.com/Q1oD8idwlI

There are plenty reasons to criticize this administration and probably even Conway. As long as leftists continue to churn up manufactured fauxrage, they detract from any legitimate criticism.

where was the outrage when the #SCOAMF put his shes on the desk?

Better than what Barnie Frank and his boyfriend did on that desk. Or, what Monica Lewinsky did under it.

Were these guys outraged when Obama was putting his shoes on the Resolute Desk? Didn’t think so.

I can’t believe they don’t have pictures of the armed men who rounded up all these important black people, and forced them to meet with President Trump.

And smile while doing it!

Never change, internet, you give us so many gifts.

Some are saying “well Valerie Jarrett would never have done that!!”

Well of course she wouldn’t have, Valerie Jarrett always sat BEHIND the desk.

When Clinton did “it” on the desk, behind the desk, and under the desk, it was applauded.

There is clear evidence of [class] diversity.

The Press is riding the double-edged scalpel to a Planned future.

Democrat media did not care when Obama picked his nose at a press conference:
https://www.google.com/search?q=obama,+nose+pick&source=lnms&tbm=isch&sa=X&ved=0ahUKEwi-vs-MxbPSAhUTzGMKHQPWDwMQ_AUICCgB&biw=1680&bih=929#imgrc=qk-Mk2a9eVI4MM:

Or Eric Holder, picking his nose before Congress:
https://www.google.com/search?q=holder,+nose+pick&source=lnms&tbm=isch&sa=X&ved=0ahUKEwjj4-SexbPSAhULzmMKHSq3DkQQ_AUICCgB&biw=1680&bih=929#imgrc=9rftzstpC4jamM:

Or Hillary Clinton, picking her nose on the Senate floor, probably drunk:
https://www.google.com/search?q=hillary+clinton,+nose+pick&tbm=isch&tbo=u&source=univ&sa=X&ved=0ahUKEwiz_rCxxbPSAhUQwmMKHQ35BHIQsAQIGw&biw=1680&bih=929#imgrc=r44UKIZFG9YnNM:

Or Michelle Obama picking her crotch while visiting a head of state in a foreign country:
https://www.google.com/search?q=MICHELLE+OBAMA,+CROTCH+PICS&biw=1680&bih=929&source=lnms&tbm=isch&sa=X&ved=0ahUKEwi3heLVxbPSAhVI5WMKHbTWDTkQ_AUIBigB#imgrc=NWfcr9zLHZkpmM:

She wasn’t “picking her crotch” as any male will tell you sometimes you just have to adjust the “twigs and berries”. Geez.

I mean when it comes right down to it, Testicles are pretty uncomfortable.

Hm, needs a MSM headline appropriate to the faux outrage.

Well, isn’t that what this story was all about – directing the public’s attention away from the fact that Trump was meeting with black leaders of institutions of higher education? Anything to draw attention away from the fact that Trump is talking to a group of black leaders King Obama probably never gave the time of day. (In fact, if you do a search of Google Images with the string obama leaders of black colleges universities, you get photos of this Trump meeting!)

You can smell the fear from the left. Trying to stir some
bat *hit controversy!

Wake up idiots you are completely out of power in Washington and if you keep acting like this is going to be for a long, long time! 🙂 Gosh it fun to see the melt down in progress.

Every last one of them.

You may be giving several of them far to much credit there. Also, really should be “spoiled” 6 year olds. 🙂

Don’t worry George thinks enough of himself for all of us.

The left is outraged that she isn’t covered from head to toe with all of those men in the room.

Lets see… Shoes on flags no problem, shoes on a couch…. This is why no one takes liberals seriously any more. They are also trying to cause a smoke screen over the White House taking direct interest in HBUC and asking them for help with inner city problems.

Officially I think she’s cute and has nice legs.

I don’t see the problem unless she had stepped in dog shit or something.

She might have stepped on the NY Times on her way in, something much worse than dog poop.

I have a small problem with here having her shoes on, but that is just because I can hear my mother yelling to “get those shoe’s off of the couch before you ruin it!” 🙂

The fact of the matter is that optics matter more than substance, and in this case Kellyanne was oblivious to some very blatantly bad optics.

The hell with whether her feet are on the couch or not. You have a blonde white woman on her knees in a room full of black men.

This imagery is unprofessional, undignified, and ripe for criticism. She is not a teenager snap-chatting her friends at a pajama-party (do they even do that anymore?) She is an adviser to the President of the United States. She should conduct herself as such.

Optics only matter to gotcha-journalists with an agenda and those who support that agenda. The rest of us could give a rip about their opinion of the optics.

“You have a blonde white woman on her knees in a room full of black men.”

So, for you, it would have been OK if she were a black woman, or a brunette?

“The fact of the matter is that” you’re a kook.

I read that the photographer was from AFP. That’s France.

The French will love her.

No one treats the Oval Office (much less the Office of the POTUS) with as little respect as the recent Dem presidents. I seem to remember that Reagan (and GWB? – not sure) never entered the office without jacket and tie. Unlike the Obama and Clinton who were seen without tie, jacket, or accasionally trousers!

So our outrage is false. We should not have expected class and dignity in the first place.
How dare we expect anything more from the DT cabal and their useful sycophants.

Shoes on the couch triggers you but shoes on a flag doesn’t even get a rise? You are what’s wrong with the US. I bet you got upset at the standing ovation for Carryn Owens didn’t you? Well let me make it easier for you, the blonde woman not named Pelosi who was crying during one of the standing ovations.