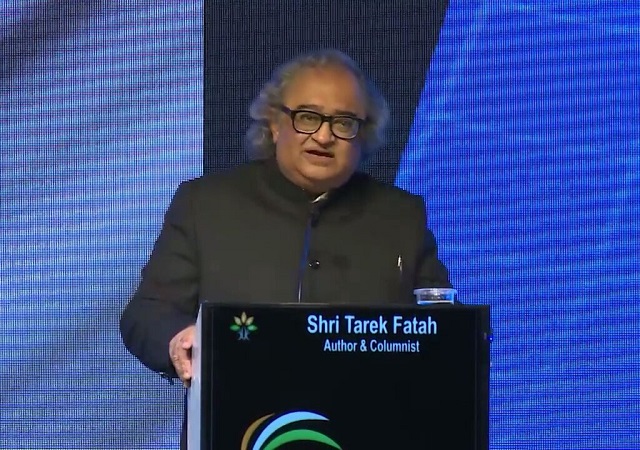 An Indian Muslim group has called for the beheading of Canadian author and broadcaster Tarek Fatah. Fatah, a prominent critic of Islam, had recently started hosting a talk show on an Indian news channel.

The Muslim organisation, All-India Faisan-e-Madina Council, placed a bounty of 1,000,786 Indian Rupees on the head of Fatah for opposing required Burqas and other Sharia practices oppressive to women. The number ‘786’ in the bounty refers to the numerical value of the Quranic verse “in the name of Allah, the most merciful, the most beneficent”. So much for the mercy and beneficence.

Presently living in Delhi, Fatah has received similar death threats from other Muslim leaders and clerics as well. Last week, he was attacked by a Muslim mob while attending a festival in New Delhi.

It is revealing to note that death threats to Fatah have been coming from mainstream Muslim groups and clerics, and not from some fringe Jihadis ‘distorting’ the teachings of Islam.

Fearful for his life, Fatah said he was a “virtual prisoner” in his Delhi hotel. He wrote in the Toronto Sun:

For the past few weeks I have been a virtual prisoner inside my Delhi Hotel, unable to walk out or attend any public event unless accompanied by “security.”

Threats by Islamic clerics that I had initially shrugged off as false bravado have turned out to be serious after one cleric pronounced on my TV show that I was a “kafir,” an apostate from Islam that, under some interpretations of sharia law, allows any Muslim to kill me, as stated unambiguously by a Canadian Islamic cleric.

A week earlier, another Islamic cleric from Kolkata, while addressing me on a live, televised debate, boasted, “you will soon be beheaded.”

Besides the All-India Faisan-e-Madina Council, other Muslim groups are pressuring the Indian government to pull Fatah off the air.  The Indian newspaper Hindustan Times reports:

“Tarek Fatah is conspiring to disrupt harmony between Hindus and Muslims. He is as an agent of our enemies. He must be stopped at any cost and our organisation will pay Rs 10,00,786 to any person who will decapitate him,” said Moeen Siddique, head of the council.

“He and his programme are being funded by foreign enemies of our country and the government must initiate an inquiry against him,” Siddique said.

Fateh, a Canadian national of Pakistani origin, is known for his secular views against Islamic fundamentalism.

“In his programme, he claims that it is not required to wear a burqa and terms triple talaq [Sharia provision that allows husbands to divorce their wives instantly] as haram. Muslims must not listen to his advice and come forward against him,” said Siddique.

Other Muslim social organisations too voiced their resentment against Fatah.

Jamat Raza-e-Mustafa, another social organisation that works under the aegis of Dargah-e Ala Hazrat, has written a letter to the President Pranab Mukherjee, demanding a ban on the television programme and expulsion of Fatah from the country.

India is home to world’s second largest Muslim population. Numbering nearly 180 million, they make up for about 14 percent of the country’s population.

Fatah, a self-proclaimed liberal, supports gay rights and calls for a “progressive” version of Islam. Describing his plight Fatah wrote, “Other progressive writers of Muslim background have faced such threats and quite justifiably left India.”

Apparently, India with its growing Muslim population is not a ‘safe space’ for liberal Muslims anymore.

Point worth noting: Those calling for the beheading of @TarekFatah are mainstream Muslim groups, not Jihadi terror groups https://t.co/fSRiXpB2eB

Many westerners like to say glibly that there should be some kind of “reformation” inside the Muslim religion, to bring them into the 21st century. Sure, that’d be nice, in a perfect world.

But there’s a reason there aren’t many liberal muslims. Not living ones, at least.

Islam can’t be reformed because murder, war and oppression are the core values of Islam as dictated by Muhammad.

Yes, and how he lived his life (which all muslims are supposed to emulate).
They’d have to discard mohammed, but then…c’est tout.

I wonder what the Canadians think about this – wouldn’t this be considered to be a hate crime.

Or would they only condemn their citizen?

Ah, yes. The Religion of Peace. Or should that be Pieces.

Typo in the article:

Note that in India it is ok to represent one million as 10,00,000 as their counting system is a little different. The reward was approximately 10 Lakhs, or $15,000.

The typo lists it as approximately $150,000, which is a dangerously large incentive in India.

For a description of the counting model, see:

Lesson over, you can now return to your regularly scheduled Muslim extremist threats.

Great write up. Good read all the way through

Thank you @PrincetonAl for pointing out the fact about Indian counting model. Being an Indian I made the same mistake.

If I stood on a street corner and offered passer-by $10 to kill someone, I’d be arrested in two heartbeats. Why am I not reading in this article that those offering a bounty for this guy’s head haven’t been arrested by Indian officials? Are they afraid to enforce the law for fear of the Muslim reaction? Or is offering to pay to have someone killed not illegal in India?

@DaveGinOly Your reading is correct. Government probably won’t take any action. These groups have been getting away with such ‘Fatwa’ death threats for a long time.

But….but…..but that is not Islam, doesn’t represent Islam. That’s what Obama said, Islam is a religion of peace. I heard him say it! Over and over and over……

…. coming to an American city near us, if nit already here (texas, detroit, ny)…
can’t wait for the oscar wearing burqa lovers at mslsd to cover this..