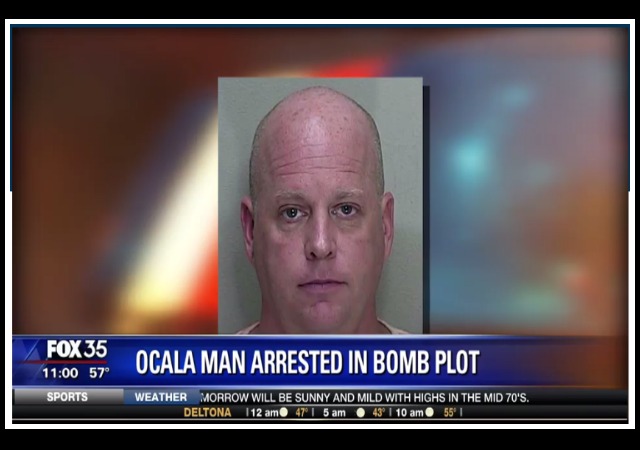 A Florida man faces federal charges because he wanted to blow up Target stores along the east coast in an attempt to lower stock prices. I am not kidding.

Federal authorities have charged Mark Charles Barnett, 48, “with possession or a possession of a destructive device affecting commerce by a previously convicted felon.” The man he hired to put those bombs on the shelves turned him in.

The Orlando Sentinel reported that Barnett supplied that man with “at least 10 explosives, a bag of gloves, a mask and a license-plate cover, which would be used to cover up the man’s identity.”

Barnett told the man to “start at Syracuse and work your way back down [to Florida].” He wanted one bomb in each store:

“Barnett told the [confidential source] not to let the box bounce around or they would explode,” according to the complaint. He reassured the source that they wouldn’t kill anybody, it said, but they would “take your hand off.”

An explosives expert confirmed that Barnett’s bombs could cause “property damage, serious injury, or death to nearby persons upon detonation.”

Turns out Barnett is a registered sex offender. He is on “probation for kidnapping, multiple counts of sexual battery with a weapon or force, and grand theft.”

Barnett faces 10 years in federal prison. Authorities are holding him without bond.

If you remember, when Tylenol was poisoned there were members of law enforcement who believed it was to drive the stock down. But, nothing was ever proved.

I remember when that happened! My dad was still a working pharmacist at the time, and he was told (as everyone was) to destroy all the stock because of the risk. So he said “well that’s stupid, none of that happened anywhere close to this state, and it was in-store tampering, anyways.” So he brought a couple of unopened cases home, cases that he was supposed to throw out, and the family had a lifetime supply of tylenol.

Yeah, I suppose that was kinda dumb, but he did stuff like that.

Poor Florida man, he just can’t get a break!

A 2×2 would better – good for beatings, and it can also be more easily shoved body cavities.

So yeah, place him under house arrest and then hide those ten explosives in random locations in his home. I mean they won’t kill him, right? Just blow off an arm or leg maybe.

I read that McVeigh used Estes rocket motors to set off his bombs.

Professor Jacobson, if he was in short position, wouldn’t that be classified as insider trading?

Trying the Le Chiffre Gambit, ala’ 2006’s Casino Royale, never does seem to work, does it?

I was trying to recall a movie(s) where that was a plot device. Did Lex Luthor try something like that in “Superman?”

Good memory! Yep, in Superman (1978), Lex Luthor planned to set off a 500 megaton bomb to trigger an earthquake on the San Andreas fault and drop California into the sea, and he had already bought up all of the land on what would become the new west coast. In his HQ he showed Superman a map of new costal cities with names like Luthorville, Lex Springs, Costa Del Lex, and Marina Del Lex.

I’m still trying to understand how a man convicted of kidnapping, multiple counts of sexual battery w/ a weapon or force and grand theft can be on PROBATION to begin with.

The jail cells are needed to house farmers who well raw milk, or street people who sell cigarettes in quantities less than a full pack.

Surprisingly the AP didn’t attempt to make a right-wing / tea-party connection with the guy.

Jeez, all he had to do is put in a unisex toilet and the stock would crater.

At 65 dollars a share, how many shares of Target could this moron have bought to make his efforts worthwhile. Not to mention having to pay tax on his gains.

Even our criminals have gotten dumber under Obama.

If he traded on margin or bought stock options he could have made a lot more. Of course any trade like that would be guaranteed to draw attention to himself.