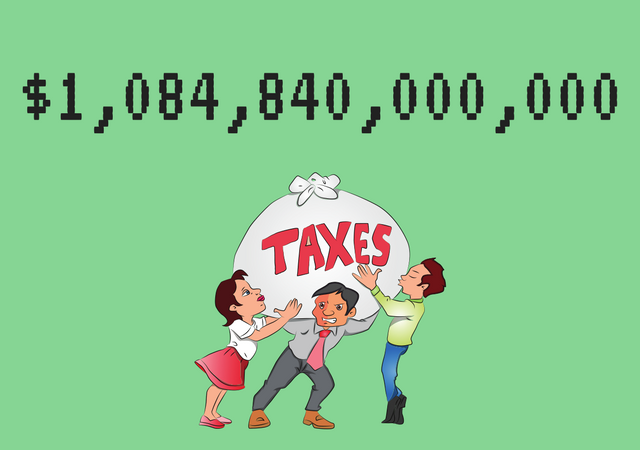 More than $300 billion was collected in January alone. 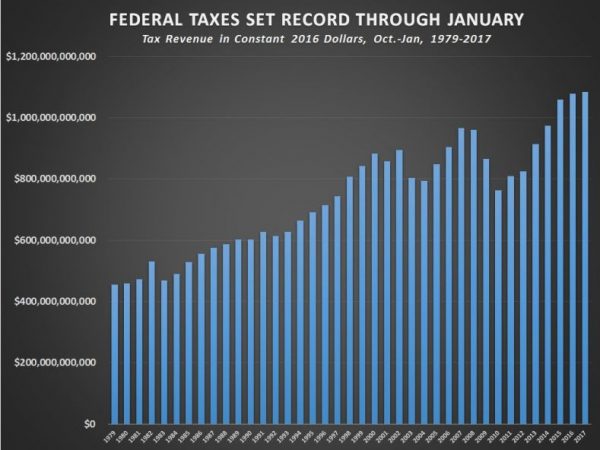 The second largest portion came from Social Security and other payroll taxes, which brought in approximately $361,887,000,000.

The income taxes collected from corporations in the United States in the first four months of the fiscal year ($84,877,000,000) amounted to more than 7 times as much as the customs duties collected on foreign imports brought into the country ($11,779,000,000).

According to the Bureau of Labor Statistics, there were 152,081,000 people employed in the United States in January. That means that the record $1,084,840,000,000 in taxes the federal government collected in the first four months of the fiscal year equaled about $7,133 per worker.

Trump recently said he’ll be tackling tax policy in the next few weeks. Among policy considerations Trump has discussed, the one receiving the most attention is his promise to slice corporate taxes.

I think the government needs a financial guardian.

Still isn’t enough for them.

It’s a simple lesson that’s lost on many — no matter how much you have, you can always spend more.

Like Everette Dirksen said ” A billion here , a billion there , pretty soon you are talking about some real money.”

Cut the payroll tax! It’s ridiculous to have us get it on both ends from income and payroll.

Better, cut BOTH, and go to a straight “consumption” tax on the purchase of new goods.

Tax gets paid ONCE, and is collected at the point of sale to the end consumer.

Bonus – it means that only people who actually CONSUME and USE the goods and resources of society are paying the tax, which is the way it SHOULD be.

the one thing no one mentions is inflation, the money number goes up but so do costs, remember Obama left Trump with a booming economy

This is NOT a “booming” economy.

When you start to see 4%+ growth, THEN we can start to discuss a “booming” economy.

Not so much concerned with tax cuts as spending cuts. I used to hear a lot of the conservative GOP members talking about the national debt. Since Trump became the defacto GOP nominee I haven’t heard anybody in DC talk about the debt. While I love most of what he is doing it amounts to putting band-aids on papercuts while our forehead gash continues to gush blood.