Fakery in the service of feminism is a vice. 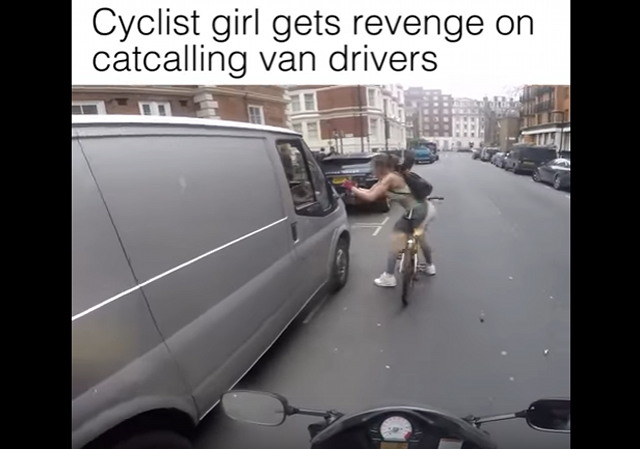 A video of a woman on a bike getting revenge on men cat calling her from a van has gone viral. It got millions of views on Facebook and YouTube. But it has now been revealed that the whole thing may have been staged.

viral video of a female cyclist ‘taking revenge’ on a catcalling van driver was staged, an eyewitness has claimed.

It shows a van driver verbally abusing the woman before she later gets revenge by ripping the motorist’s wing mirror off.

The footage, filmed in Tottenham Court Road, central London, was captured on a moped rider’s helmet cam and racked up over 10 million views on Facebook in less than 24 hours.

However, eyewitness Scott Deane told The Sun it was staged, he said: “They practiced the scene two of three times with the motorbike riding behind them.

“You could see there was already damage to the wing mirror, it was loose … I couldn’t believed it when I saw the video online.”…

The clip shows the cyclist hitting out at the van driver, who responds: “Woah, woah don’t be like that!”

She responds: “Go away!”

“Woah! That’s not very lady-like is it, ay? Oi, what charm school did you go to ay?” the van driver responds.

He adds: “You wanna tell your mum and dad to get their f—–g money back.

After the cyclist takes revenge, the man who filmed the footage tells them: “That’s exactly what you deserve, you scum!”

Joanna Williams of The Spectator sees parallels between this and another pro-feminism story that went viral:

There seems to be a fear that condemning the video could result in women’s experiences of street harassment being called into question. But there’s really no need worry. Over recent years, as feminism has grown ever more distant from the reality of women’s lives, it has thrived off dubious stories of unsubstantiated personal experiences.

Rolling Stone magazine’s now notorious 2014 article, ‘A Rape on Campus,’ told the tale of ‘Jackie’, a student at the University of Virginia, who claimed to have been gang raped at a fraternity party. Following widespread media attention, the closure of the fraternity and the suspension of the accused students, Jackie’s story unravelled. Rolling Stone retracted the story and issued an apology. A subsequent investigation blamed the journalistic failure on confirmation bias: because the incident supported the pre-existing narrative of universities being in the grip of a rape culture, too few questions were asked.

When personal experience is not enough, dodgy statistics are brought in to shore up feminism’s pre-determined narrative of women as victims.

This is correct. Facts don’t matter when the narrative is at stake.

The left never stops exploiting the more vulnerable people of the planet. And, they are so proud of it.

Don’t worry ladies, there is hope: No man will even notice you once you turn 40.

How old is Melania?

Don’t like what someone says so destroy their property? How very progressive.

What is her name? I think she might be one of my ex-wives.

Well, that part rings true. So even if staged the video reveals the Left’s approval of violence in an otherwise non-violent confrontation – “We expect you to approve of this; this is what we find acceptable.” “Leadership” by example (even if a fake example – try this in real life and you might get a beat-down).

Hey! It’s as real as the rest of the progressive memes.

If it were real, I’d say the woman clearly has anger management issues.

Billy H Did not mean to downvote you was trying to hit reply.
I was going to say obviously you have never seen Halle Berry or ,Sandra Bullock,

So, assuming this is a fantasized idealization of modern feminism, like those Navy training films showing cadets how to do challenging jobs, like opening doors for their dates without embarrassing their uniforms …

… the lesson is that vandalism (or perhaps some other form of physical violence) is the proper response when The Feminist doesn’t like something somebody said.

Yes, this type of response is extremely dangerous. It reinforces the idea that every “victim” is entitled to resort to nuclear destruction for any slight. This then leads to people who self identify as “victims” to justify excessive behavior as being an appropriate response to any slight, real or imagined. Anyone wonder why the violence in our society is increasing?

In Chicago if you tried this on the wrong van, you could get shot.

Guns? We don’t need no stinkin’ guns. The automobile is one of the most deadly anti-personnel weapons ever devised by the mind of man.

Staged. Side view mirrors are not so easy to rip off.

Wouldn’t it be great if a real woman rode up next to her and clocked her?