Policy parade shows The Establishment is still not extinct. 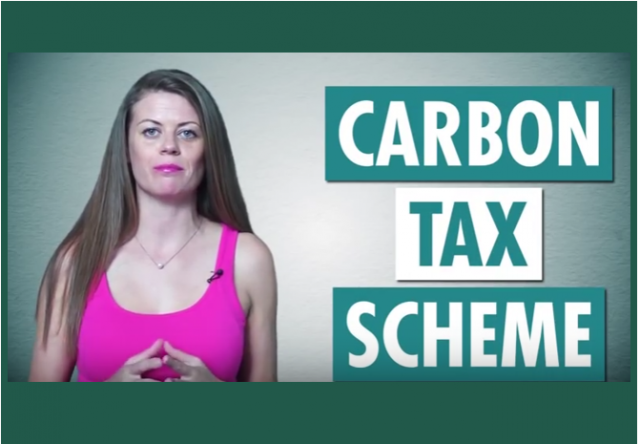 I recently blogged that a whistleblower revealed startling evidence that the National Oceanic and Atmospheric Agency rushed to release a widely-cited paper that exaggerated global warming and was timed to influence the Paris Agreement on climate change.

Despite the clear evidence of science fraud, big government bureaucrats are still promoting climate change policy. In fact, a group of long-time Republicans who have held high-level government positions are now promoting a “carbon tax” to address changes in global weather patterns.

This so-called carbon tax is being touted as a “Conservative Climate Solution“:

Mr. Baker is scheduled to meet on Wednesday with White House officials, including Vice President Mike Pence, Jared Kushner, the senior adviser to the president, and Gary D. Cohn, director of the National Economic Council, as well as Ivanka Trump.

In an interview, Mr. Baker said that the plan followed classic conservative principles of free-market solutions and small government. He suggested that even former President Ronald Reagan would have blessed the plan: “I’m not at all sure the Gipper wouldn’t have been very happy with this.” He said he had no idea how the proposal would be received by the current White House or Congress.

As an environmental health professional, I will counter this proposal by noting:

1) Sensible conservatives do not base policy on fraud.
2) “Carbon pollution” is actually carbon dioxide, which is essential for plant life (and subsequently critical for all life).
3) The only climate higher taxes will change is the economic climate…and not in a good way.

How is this collection of Republican grand poobahs packaging this tax plan to make it appealing to the Trump administration? By promising to return the tax to the American people. After establishing a carbon tax that starts at $40 per ton, the monies collected would be redistributed in the form of a quarterly check from the Social Security Administration to every American family.

Baker and his colleagues estimate that the average family of four would receive $2,000 annually in dividends from the fee if it starts at $40 per ton, and as the tax rises, so would their dividends. This would naturally create a constituency for ever-tougher climate change action. They also assert that the proposal would be fundamentally progressive because everyone would receive the same amount of revenue from the tax regardless of their income level, meaning the new source of income would make a bigger difference for poorer people than for wealthier ones.

I suspect those “poorer people” would prefer NOT to pay the extra money for gasoline, electricity, and necessities like food (which would be the most direct consequence of the carbon tax). Furthermore, many Americans would prefer to get paid directly for doing jobs related to the extraction of petroleum for natural resources (or otherwise providing services to the industry or its workers). Additionally, Social Security benefit distribution is ripe with waste and fraud opportunities.

The model is rather like Obamacare: Buy your pricey health insurance, and then apply to the government for a credit based on parameters set by the politicians. The collapse of that system is proof of the model’s failure.

Happily, I think this “conservative carbon tax” is going to be a hard sell.

Trump himself has come out against the idea, rejecting a carbon tax in responses to a survey by the American Energy Alliance last March. Many of the conservative advocates guiding Trump’s energy and environment policy also eschew the idea.

This policy sighting clearly shows that the RINO is not extinct. Hopefully, President Trump and his science policy advisors will treat this “conservative climate plan” as the government power-grabbing scheme that it is.

They didn’t come up with this insane scheme out of thin air. And they aren’t making noises about “carbon pollution” out of their great concern for the country.

My bet would be the Saudis are paying them to push this silliness but there are lots of others who could and would bankroll it.

Bu…bu…but Rex Tillerson is ONE of the “Republican poobahs” who flack for a carbon tax and Gorebal Climate Thingie, and Baker is a BIG promoter of Tillerson.

As I said. Yes, the RINO is not extinct. In fact, he’s the Sec. Of State. And there are other cabinet officials who are not even RINOs. They’re Deemocrats. Even Soros employees!

Well, that certainly limits things. An open fraud based approach allows for far more options, as well as personal profits. This is one of those great ideas…. you could never tax the air people breathe but, hey, let’s tax the air they exhale.

Do you see the advantage? If you try to tax something as basic to life as air, you are going to even get people in Ithaca upset about things like equal access to air, quality of air (not everyone has a dog to blame it on) and the equality of the distribution process… is it fair that someone who lives at sea level (as do most liberals) get more air than people who live above 7,000 feet?

How about those giant fans that were going to be constructed on Martha’s Vineyard? Everyone thought they were there to produce electricity. Wrong… they were going to be a tax supported scheme to make sure the rich and liberals got more air than other citizens.

Yeah, the Weekly Standard has been running articles like this for a long time. There was even one that sort of addresses your concerns, in a South Park kind of way. Back in 2014, Irwin Stelzer wrote that (1) the science is wrong; (2) the public is realizing it’s a scam; (3) therefore, we have a unique opportunity to implement cap-and-trade.

It was template-based logic chain without regard to the underlying meaning of the links in the chain.

a serious load of crap

Those were once very fine Republican poohbahs, but this move to recover their former glory deserves a nice pat on the head and a free dinner at the Mark Hopkins.

I upset some of the readers in the comments section for the original WSJ article where they were pushing it by saying simply that these two GOP-e fossils needed to go find a nice rest home where they could go sip mai-tai’s and watch the sunsets for their remaining days.

Both of these guys have been life-long Bush family courtiers. If Jeb would have won, OR Rubio, OR Kasich, or any number of others, this is who would have been calling the shots. And these are the same guys who were quietly saying that a vote for Hillary was better than a vote for Trump. Good riddance, you jackasses.

THIS is how close we came to losing everything on the enviro front, same as on the immigration front. THESE GUYS represent the so-called republicans who ALWAYS wanted totally open borders, and surrender to the climatistas and SJW’s, just so they could line their pockets.

That “group of long-time Republicans” need to be subjected to a surprise “fraud audit” IMO. (If they’re innocent dupes, they have nothing to fear, but….)

Always a first question, who’s getting the money from and for this?

He suggested that even former President Ronald Reagan would have blessed the plan: “I’m not at all sure the Gipper wouldn’t have been very happy with this.”

Such imaginary benedictions are a sure sign that even the people pushing a scheme have nothing factual to support it.

But the danger here is that Baker, Schultz, et al are nowhere near as dumb as the Democrats, and their plan is more subtle and pernicious. The Dems can appeal only to the militantly hysterical, and the dumber sort of sophmoric Marxist—hey, we can really stick it to Big Industry, and that will be, uhhh, good. But this Republican wannabe plan banks on outright bribery for its anticipated popularity, and not the usual bribery which appeals mainly to people who already have money. This would be the Republican version of “Obama’s gonna pay my mortgage!” Pretty crafty. Economic and scientific balderdash, of course, but good, weasely, old-school politics.

The poor will love it because they’ll get fatter checks cut to them by the government. Which will of course encourage them to vote for the people giving them money which has been stolen from others.

The Wall Street bankers will get behind this because along with the taxes will come the idea of “offsets” which will be sold and traded in a new market that will, of course, be run by the Wall Street guys. They’ll make billions trading imaginary tons of carbon… might as well be Unicorn farts.

And some people just can’t understand why we DO NOT trust and openly despise so many of the “ELITE Political” class !

notamemberofanyorganizedpolicital in reply to Lewfarge. | February 11, 2017 at 12:56 pm

and this is how you got Trump.

Please don’t confuse the lefties with truth or facts !

Climate change is real; it is an ongoing process that has been working since this rock congealed. What is questionable is the assertion that humans are having a massive impact on that natural process. The whole thing is brought into sharp focus when you notice that none of the “climate models” are able to work backward in time, even when loaded with the best historic data available. It becomes even less tenable when its proponents have to deny events such as the Medieval Warm Period and the Little Ice Age ever happened even though both events were well documented by humans living in those periods, with that documentation supported by irrefutable scientific evidence!

Climate change will continue, no matter what we humans do one way or the other. The only thing a tax will do is take money from people who can ill afford it and give it to (mostly) bureaucrats.

No surprise. The GOP is just as corrupt as the DEMs. All governments are constantly looks at ways to increase their revenue. ObamaCare will not go away. To many DEM and GOP handlers are getting rich from it.
—-
In all of history, no government became more honest, less corrupt, or respected its citizen’s rights more as it grew in size. E.L. 2016

“In all of history, no government became more honest, less corrupt, or respected its citizen’s rights more as it grew in size.”
England, 1801 to now – considerably improved in all 3 measures.

You correct that they improved after 1801 or so. But in recent years they’re headed in the wrong direction again.

What happened around 1801 to move them in the right direction?

The answer to that question should be a warning to progressive and other freedom-trampling politicians everywhere.

GOP-Elite or GOPe–either way, I don’t think that DJT is buying it, especially when Baker et al. did all they could to screw us.

Apparently, the RINO Establishment isn’t extinct ENOUGH. The very idea of a carbon tax is political arsenic, and as likely to be as popular as jock itch in certain quarters…

And they still wonder why. There are conflicts of interest left, right, and center.

Damn republicans want to kill all our plants!!

Sweet Jesus, No. Drive a freakin’ stake through its heart already.