Raymond Buckley wants his party to concentrate on the issues that have worried Americans. 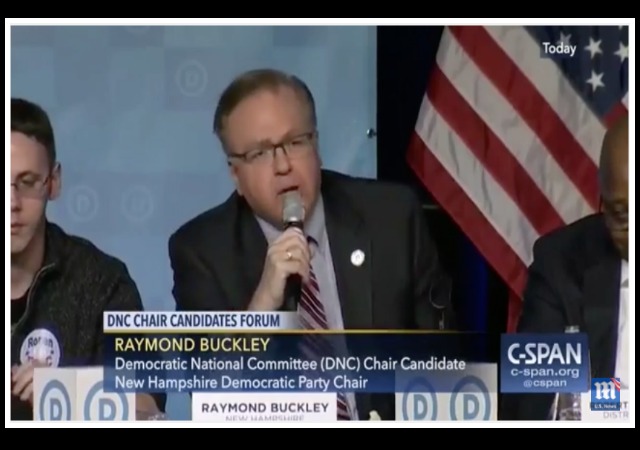 New Hampshire Democratic Party Chair Raymond Buckley, a candidate for the DNC chair, told his fellow Democrats to “grow up” at a forum in Baltimore. Buckley noted that the Democrats did not concentrate on the issues that actually concern regular Americans. From The Daily Mail:

Buckley said the Democrats ‘did not offer a positive message to anyone I … am related to.’

What the Democrats did do, Buckley stated, is say ‘how offensive.’

‘That is not reality for most of America,’ he said.

He appeared on Fox & Friends on Monday:

“We’ve had 11 or 12 debates already, and clearly we’ve been talking about a number of issues we tripped up on,” Buckley said. “But we really never got to the point that our nominee’s campaign really did not address the economic issues that so many Americans are still suffering under.”

It’s been said the Democrats have become a coastal party, with strongholds in California, New York and Massachusetts. However, the message has failed to spread to middle America.

“I think it is important that whoever is our nominee in 2020 that they listen to our grassroots and less to their high-paid consultants,” Buckley said. “I really think that is a major problem within our party, both at the DNC and with our candidates up and down the ticket.”

Buckley is one of ten candidates to take over the DNC after Rep. Debbie Wasserman-Schulz resigned last summer after someone leaked emails before the convention.

Instead of taking Buckley’s advice, the DNC has shown it wants to keep moving to the far left since Rep. Keith Ellison (D-MN) and former Labor Secretary Thomas Perez remain the favorites. Former Sen. Jim Webb (D-VA) expressed this sentiment when he appeared on Meet the Press this last weekend. From RealClearPolitics:

“You can’t have a Jefferson-Jackson dinner, which was a primary celebratory event of the Democratic Party for years, because Jefferson and Jackson were slaveholders,” Webb lamented. “They were also great Americans in their day. Something different has happened to the Democratic Party.”

He said that the party’s focus on “identity politics” has lost them a “key part of the their base.”

He continued: “The people who believe that regardless of any of these identity segments, you need to have a voice in a quarters of power for those that have no voice. And we’ve lost that for the Democratic Party.”

Webb also noted that the Democrats lost the middle of America, who they need to gain back because they “used to be the core of their party.” From The Hill:

“You’ve lost white working people. You’ve lost flyover land, and you saw in this election what happens when people get frustrated enough that they say, ‘I’m not going to take this,'” he said.

“There is an aristocracy now that pervades American politics. It’s got to be broken somehow in both parties, and I think that’s what the Trump message was that echoed so strongly in these flyover communities.”

What is this guy thinking? – The whole point of being a leftist useful idiot is not having to grow up!

You cannot give the base of your political party over to violent leftists and think you can talk them back toward the center.

The only way the Democrats will get their Party back is through violent counter-revolution.

I really think the rank-and-file Democrats have the Party that they want to have. They wouldn’t change a thing.

But has he committed to telling white democrats to shut up?

Actually they did have a message to his neighbors. The message was, “we’re going to force you out of a job, but we’ll pay to retrain you.” That’s kinda like saying we’ll kick you out of your house, but we’ll pay for you to take a class for first-time home buyers.

Or, we will charge you double for your new healthcare insurance because you will be paying for access for other people. But, you can always apply for a subsidy.

Sane Democrats such as Buckley have no future in that party. None.

Aaaaand…he stepped down from the race for the DNC chair.

I wish him all kinds of luck with that message. I expect the response will be just as constructive as the one my kids gave me when I delivered it back in the day. Meaning they completely ignored it.

This guy sounds smart, more like my grandparent’s Democratic Party. They definitely won’t select him.

I had the same reaction. This guy is too normal, too accurate about what the Dems need to do. He’s dangerous, lol.

this is the way that new republicans come from –
Trump will add many more voters to the ‘pubbie brand.

agree completely – we’re lucky that the Dem’s most likely reaction will be to throw this guy out of the party for being so bluntly honest.

notamemberofanyorganizedpolicital in reply to Henry Hawkins. | February 13, 2017 at 7:39 pm

He’s not if you listen to the end of the clip very very carefully. There he makes a classic Dem-Crazy crack.

Dems decided to ignore their white working class people years ago. I remember an article stating it and I’d bet I wasn’t the only one. Like the black vote, they took their votes for granted and didn’t do a damn thing for them.
If President Trump brings the black unemployment down by even 10% the black voters might just vote repubs in a larger percentage (don’t expect miracles yet, they’ll still vote overwhelmingly dems, but if Trump can raise their hopes we can expect good things).
Now their stuck trying to stitch together a coalition of minority identifiers under the “unfair to my group” so we need special privileges voters.
My only surprise is how badly the repubs had done trying to win the Presidency prior to President Trump. Probably would have beaten him if Mitt had fought back hard. Hopefully the lesson was learned.

Let us not forget … there was a message …

Democrats pursued a strategy of degrading people and in the process degraded themselves. Unexpectedly, of course.

Their issues are what got them in trouble in the first place.

It feels like this campaign for DNC chair has been going on forever. When do they put an end to this torture and pick the loser…I mean “winner”?

notamemberofanyorganizedpolicital in reply to Blaise MacLean. | February 13, 2017 at 7:36 pm

“Pick their Weiner!” –
as in Anthony Weiner

They could start by stopping the use of the term “flyover country” on “Meet The Press.”

Two new members for the new third party that Trump will initiate when he gets tired of the republican leaders backstabbing him .

If they were really worried about the plight of the working class, they would be trying to make businesses easier to set up, more able to hire employees, and less likely to flee overseas due to lack of the above.

If they were concerned about the middle class being shunned and degraded, they should not have nominated a candidate who thought they were all deplorable idiots, and had no problems stating such.

IF this guy gave a damn about “working Americans”, he wouldn’t be a modern day democrat. Period.

Well… he didn’t do anything but complain.
So, I am not optimistic that there really is a single live Democrat left.
I think they are now just a bunch of communist’s.
Completely extinct Democrat party. Dead. Gone.

This guy is so completely out of step with his Party its just unbelievable.

How can he think like that and still call himself a Democrat?

Could you imagine the howls from the D’s base if he actually became head of the DNC?

Anyone that would support this guy has already joined the Republicans.