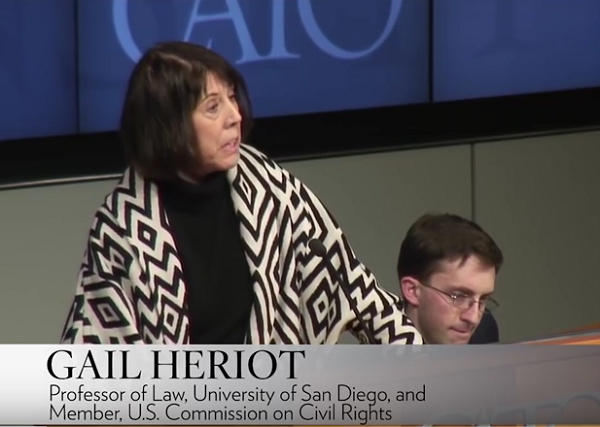 The Department of Education and its sub-agencies appear here to stay (alas), but there is good news.   The “reforms” the Office for Civil Rights (OCR) has inflicted—particularly on higher education—over the past eight years may well be in danger.

The Office of Civil Rights is a sub-agency within the Department of Education that oversees a range of issues, some invented, that affect K-12 and higher education (and some that don’t like ensuring “equal access” to the Boy Scouts and other youth groups.).

From college kangaroo courts regarding alleged sexual assaults to Title IX’s expansion to include pregnancy as a disability to transgender bathroom orders and gender identity mandates, the two candidates rumored to be in consideration to head the OCR would each make substantive changes should they be appointed.

The Chronicle for Higher Education reports:

Although the White House has yet to tip its hand on its pick as the department’s assistant secretary for civil rights, speculation among plugged-in Republicans whose views have influenced other cabinet picks centers on two well-known conservative figures: Gail Heriot and Peter N. Kirsanow.

Both Ms. Heriot and Mr. Kirsanow are members of the U.S. Commission on Civil Rights who recently have accused the department of overreach in dealing with sexual assault and the rights of transgender students on college campuses. Both also have been vocal critics of colleges’ consideration of race in admissions and student housing.

Kirsanow, however, has said that he would likely turn down the offer, and the speculation is that Hariot is likely to get the nod because, in part, woman.

Hopefully, the Trump White House is not bowing to SJW pressure and picking people based on things like gender as “political cover”; the irony of doing so for this particular spot is almost too much to bear.  That said, Heriot is, on her own merits, a solid candidate for the position.

Of the two, Ms. Heriot, a professor of law at the University of San Diego, may be most likely to get the nomination. That’s partly because Mr. Kirsanow, a labor lawyer in Cleveland, has a broad background that places him in the running for an array of other federal positions. That Ms. Heriot is a woman also could work in her favor, as the Trump administration might see her sex as giving her a measure of political cover in carrying out one of its top priorities for the civil-rights office — reducing the office’s guidance on Title IX, the federal gender-equity law.

A letter sent by conservative scholars (yes, there are still a few) to the White House says of Heriot:

Referring to the Department of Education, the incoming Trump Administration has vowed to “cut its power and reach” to make it more responsive and accountable to the American public and to local school authorities.9 This will require a Department of Education Assistant Secretary for Civil Rights who has the requisite credentials, including an in-depth understanding of the functioning of the Office for Civil Rights and an unwavering commitment to civil rights.

Such a person is Gail Heriot, a professor of law at University of San Diego School of Law, where she teaches the law and history of civil rights, and a member of the U.S. Commission on Civil Rights.

Professor Heriot has a demonstrated commitment to restoring control over public education to state and local authorities. She also believes a free people must be governed by their elected representatives, not by OCR bureaucrats.

Gail Heriot has repeatedly expressed concerns with the current policies and actions of the Office for Civil Rights:

Heriot herself has not been in touch with the White House and does not know if she is in the running or not, so much of this is speculation (though she’d be a good pick).

In an email last week, Ms. Heriot said she had not talked with Ms. DeVos or anyone else in the Trump administration over the position. “For all I know, a decision may already have been made,” she wrote. “I really don’t know much of anything about this process.”

In separate emails on Thursday, Ms. Heriot wrote, “I still haven’t heard a word from anyone within the administration.” She added: “I’m certainly willing to talk about it with Secretary DeVos. I understand that a number of people have recommended me.”

The other candidate for the OCR spot, according to the Chronicle, is a signatory on the above letter recommending Heriot for the position.

Mr. Kirsanow is among the signatories of the letter recommending Ms. Heriot. In an interview on Thursday, he said he probably would turn down the job if offered it.

Undoing eight years of SJW hyper-drive via the OCR will be a joy to behold and could go a long way to correcting the insanity on our nation’s campuses, so I hope that Heriot, or someone who shares her view of the sub-agency’s role, will be selected.

If she becomes the final candidate, expect a vicious backlash that will make the DeVos hysteria look tame. Of all the areas where progressives fear the erosion of their agenda and influence/control, education is by far the top of the heap.

I recall a phrase by someone in the past the went like this; “Elections have consequences”. Just can’t put my thumb on it. 😉

It’s always going to be like that – we’ve got to stop caring about their ‘backlashes’ – they mean nothing.

They’re for the likes of John McCain, Morning Rino Joe, Squeaker Ryan and the grotesque McConnell to worry about.

It’s not just the person being offered the job. The personal attacks and smears affect family members and others within someone’s close circle.

Actually they can’t make the DeVos hysteria tame by comparison; that’s the problem with dialing the intensity up to 11 right at the start, they’ve got nowhere to go, no more outrage to express than they’ve already expressed.

She will be good. Here is her response to Rep Zoe Lofgren (D-CA).

It’s curious how a Democrat/liberal would claim that it would be absurd for you to claim to be a Russian princess simply by making the proclamation and yet defends staunchly when a man claims to be a woman (who are you going to believe, me or your lying eyes and the DNA tests), that a woman was raped on a college campus by a man she had a relationship with, or any of of a number of other absurdities.

Because education is where they brainwash the massess

I think it is more than that. Certainly there is a lot of evidence and history about shifting the content in what is taught. Decades of history. But even more important to me is the urgency to not let more power to go to the states. That is the current threat for progressives,and with the absolute unison of educational employees and unions with progressives, this is the most important area to not give an inch. So far they have successful in tarnishing every gain with changes like school choice, etc. It is their most critical power battleground as much or more than simply what is taught.

The states have always been the focus of the radical reenvisioning of education going back to Project Education Reform: Time for Results when Bill Bennett headed fed Ed and Lamar Alexander headed the component NGA as Tennessee Governor. Do not fall for specious federalism where the states and local schools are merely the decentralized executors of a centralized vision.

That is how systems work and the radicals have always wanted to use that while parroting Local Control and Choice as this showed. http://invisibleserfscollar.com/linking-school-choice-and-third-party-government-escaping-requires-we-recognize-the-incarceration/

Just be careful because the behavioral science used to alter K-12 education has also been used to frame what we taxpayers and parents are told. We are supposed to blindly advocate for public policies that actually do not work as we assume. Our presumed intent is irrelevant once something becomes law at any level of government.

It’s not just that education is a means to brainwash the masses, it is the need to recognize that construing a civil right to equal outcomes in education forces a type of education vision that is anything but academic. It forces education to be about altering the internalized values, beliefs, and attitudes that are the determinant of future behavior.

I am an attorney and wrote a book called Credentialed to Destroy: How and Why Education Became a Weapon that laid out how the federal and state laws and how they are being interpreted and what is being funded all mandate a particular vision of education that has always been associated with invisible achieving radical social and economic change. It’s always been about collectivism and misconstruing civil rights as about meeting needs as a legal obligation via education edicts is a huge component.

Whoever fills this position needs to appreciate how education reforms and the law are both the primary tools for fundamental transformation, with no notice or consent in the 21st century. Just last week the World Bank declared its intention to use the law and education to adjust internalized preferences of how societies should be structured. They were also at the World Government Summit in Dubai last week that we were not invited to. We are all impacted though by the vision of Positive Education released there.

People should also know about your blog:
http://invisibleserfscollar.com/

notamemberofanyorganizedpolicital in reply to gonzotx. | February 20, 2017 at 2:02 pm

A second rejection of [class] diversity is long overdue.

Diversity? Isn’t that to education, what a bicycle is to a fish?

As a graduate of this University, I am proud that it has not totally abandoned reason.

Could it be that rolling back the sexual-misbehavior-on-campus witch hunt was reason enough in itself to vote Trump, just to keep Clinton out?

Although Trump may be poorly positioned to roll this back, Saint Hillary seemed sure to escalate a mere inquisition into a full-blown Holy War.

But what remains disappointing is how few academics have been willing to speak up for due process. Even if one ignores the rights of the accused, a basic remise and purpose of criminal justice is deterrence: although some would not commit crimes if there were no penalty and others will even if punishment is both harsh and certain, at least some will be deterred by the possibility of punishment. The excuse for this witch hunt is to make campuses safer, yet blurring the line between perpetrator and falsely accused can only make campuses more dangerous as potential perpetrators will hardly be deterred when they realize they’re likely to be treated the same whether they behave badly or not.

So, the excuse is, it’s not a criminal trial and no one’s going to prison. But someone found “responsible” will probably be unable to either graduate or transfer to another school, and will surely have difficulty finding any but the most basic employment; these are hardly trivial consequences.

Where are our brave “speak truth to power academics” when doing so is less than risk free? With far too few exceptions, they’ve gone MIA. Hey, ACLU, where are U- busy shaking down business owners for non-PC behaviors instead of trying to correct this massive breach in due process protections?