. . . and a “white supremacist sympathizer” 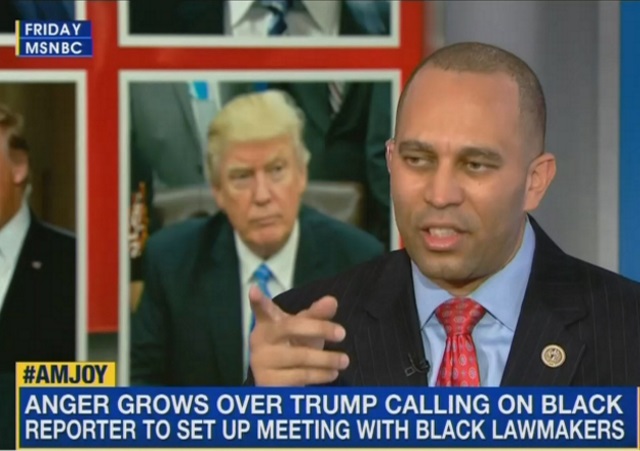 Congressional Black Caucus member Rep. Hakeem Jeffries has called presidential assistant Steve Bannon a “stone-cold racist.” Jeffries offered that description during an interview with Katy Tur on her MSNBC show yesterday in explaining why it would be “hard” for him to attend a meeting between President Trump and the CBC if Bannon were present.

Joy Reid played the Jeffries clip on her MSNBC show this morning during a discussion of a possible meeting between the president and the CBC. April Ryan, the reporter that President Trump had requested, at this week’s press conference, to set up a meeting with the CBC, was a guest on Reid’s show.

Ryan—who declined the president’s request to set up the meeting—reported that she had spoken with CBC Chairman Cedric Richmond, who told her that shortly after the press conference the White House had reached out to the CBC to set up a meeting and that the details of date and time were being worked out.

Note: Ryan also reported that she was not aware of any CBC member other than Jeffries who would boycott the meeting if Bannon were present.

JOY REID: Let me let you hear what one member of congress had to say. Hakeem Jeffries: he spoke to our own Katy Tur. And he was talking actually about your press conference but this was him talking not just about Trump but about his team. Take a listen.

KATY TUR: What do you make of him asking April Ryan to set up that meeting?

HAKEEM JEFFRIES: It was very strange, but he’s done a lot of very strange things over the last 28 days. And hopefully some of his advisors have informed him, one that a letter has already been sent to him and that we’re looking forward to an open dialogue. Steve Bannon, however, should not be in the room.

JEFFRIES: Well listen: he’s a stone-cold racist and a white-supremacist sympathizer. It would be hard for me to participate in any meeting in which Steve Bannon, that normalizes his presence in the White House. Beyond that, we’ll have to see.

REID: So April, just from your reporting, are there more members of the CBC who are saying if they get their meeting they don’t want Steve Bannon in the room? That’s part A of my question, and part B, do you have the sense that because people like Bannon are around Donald Trump, that’s reinforcing this sort of view of black people as just a stereotype?

APRIL RYAN: Well, I haven’t heard anyone else beyond Congressman Hakeem Jeffries say that, but I’ve also heard from Cedrid Richmond, who is the head of the CBC– who says he will have, they are going to have this meeting because the White House did reach out to them not long after that press conference Thursday. And they’re trying to pinpoint a date and time.

‘why it would be “hard” for him to attend a meeting between President Trump and the CBC if Bannon were present.’
Using this racist jerk’s own standards it is hard to see why anyone should meet with the uniformly racist black caucus.

Sorry, Rick, but apparently you missed the memo. Only white people, possessors of privilege and oppressors of people of color one and all, can be racist.

(That was sarcasm for those of you in Rio Linda.)

You are acquiescing to the likes of this diseased freak even by sarcastically discussing ‘not getting the memo.’

This moron is not our bratty child, and we’re not beleaguered parents. Enough with the indulgence.

Think of us more like a political swat team: people like this need to be taken out of office, period.

But that is really the game that Trump pulled the mask off of. They need racism as the excuse to get nothing done or especially to refuse to have a discussion. It is Yassar Arafat 101. You are only employed as long as the conflict continues so you make unreasonable demands as soon as the olive branch is extended and them when any demands are not met you say the other side isn’t “serious but is matter of fact insulting” and thus the grievance industry gravy train where you don’t need solutions just complaints and slurs to continue in the leadership position continues.

notamemberofanyorganizedpolicital in reply to Conan. | February 18, 2017 at 1:48 pm

TheFineReport.com in reply to notamemberofanyorganizedpolicital. | February 18, 2017 at 2:53 pm

They’re the ones continuing to put these idiots in high office.

I mourn for the country we had just a decade ago, where so much of this crap had been dealt with.

Me, too.
In 1957-1959 in lived in Ft. Rucker, Alabama. On the Army post we of course had a racially mixed group of teenagers, but on Monday morning the white kids went off to their school in Ozark and the black kids went to theirs. It was quite stunning for us. As you wrote, our country had made great progress in changing all of that, but then along came the new black racism.
I despair for the hopeless of black kids engendered by the race industry and now officially by the democrat party.

I’ve told the story before, but my HS graduating class elected a black friend of mine class president in 1968 San Antonio, and that school was pretty “elitist” as public schools went.

It just wasn’t a thing for us…

notamemberofanyorganizedpolicital in reply to Ragspierre. | February 18, 2017 at 1:50 pm

Racism, where would it be without politicians?

I was the plaintiff (as a 6th grader) in the lawsuit to desegregate our local schools back in Tennessee in the early 60’s. My parents were very concerned about violence. I got called a n*-lover once (by the son of a seminary student, no less), but that was it. Everything went without a hitch. There really weren’t that many back then who were true racists and acted as such. There are even fewer now, if we exclude progressives.

Steve Bannon is no racist.

Having read widely and varied materials, but especially history, and travelogues, I’ve discovered there is a buried and hidden history of “racial harmony” in this country.

No it doesn’t justify the “injustices” but the “racism-industrial-complex” has deliberately buried and hidden that history to support lies and greedy thefts.

A quick check of news items over the last decade shows that the most prominent racists in this country during that period were: Barack Obama, Al Sharpton, Jesse Jackson (Sr and Jr), and the entire Congressional Black Caucus. They were of course aided and abetted by the New Black Panthers, Black Lives Matter [“What do we want? Dead Cops! When do we want it? NOW!], and the entire Blacks-Are-Too-Dumb-To-Do-For-Themselves-League, which is of course run exclusively by blacks getting rich off the Rayciss Gravy Train!

For those who think school segregation was strictly a Southern thing, I attended NYC public schools grades 1-12. There were exactly zero black kids in any of my classes, and there were zero black kids in my schools until my senior year of HS, when busing began.

Sort of like what he said, when he was making a joke about racial healing?
My favorite part of the Obama era…

Race baiting by victims has been around a long time. Unfortunately.

Any proof that Bannon is racist? To accuse people of being racists and Nazis with no evidence says more about the accuser than the accused.

notamemberofanyorganizedpolicital in reply to Eddie Baby. | February 18, 2017 at 1:56 pm

That is known as libel and slander.

Ironically, this is a Nazi tactic: it was Hitler himself who propagated the ‘big lie’ theory:
“If you tell a big enough lie and tell it frequently enough, it will be believed.”

You can tell a lot about people by the tactics they utilize – particularly in high office. Aside from this a-hole, Crazy Pelosi and Rubio-handler Charles Schumer come to mind.

I was going to ask the same question. Where is the documentation of his supposed racism?

He’s also ugly and his mother dresses him funny.

Yeah, yeah, we’ve heard all of your stupid baseless insults you throw at everybody who doesn’t believe in the pure Liberal lie… I mean line. Let’s take a look at your evidence.

Bank on it: If this meeting between the WH and the CBC happens, Jeffries will be there. Bannon or no Bannon. He will look even more petty and stupid as the sole holdout. Right now he is just attention seeking using the usual and worn out racial tactics.

Trump should specifically exclude this guy, or any other racist.

DJT is no fool – he threw the bait out there during his presser. He KNOWS the racist attitude of the CBC. Hakeem might as well have called Bannon a Nazi (oh wait – THEY HAVE – as well as DJT).

Here’s the deal there CBC – YOU DO NOT DICTATE TERMS TO POTUS. You have essentially thrown down the RACIST GAUNTLET – and I would be surprised and DISAPPOINTED BEYIND BELIEF, if DJT didn’t MAKE SURE BANNON WAS PRESENT NOW.

The testicles in these people is AMAZING. They simply forget that THEY ARE DEMORATS – EVERY LAST ONE OF THEM. Coincidence – methinks NOT! Why aren’t black Republican members of congress asked to join? RACISM – that’s why.

They seem to forget the MAJORITY WE HOLD IN BOTH HOUSES – WE DO NOT NEED THEIR PERMISSION.

It’s not about the CBC. It’s about having an ignoramus for a president.

They just upped the ante, exposing themselves for what they are.

Identity politics is a dead-end street.

It’s the Congressional “Black” Caucus. The class is black. The gatekeeper is black. That’s their choice.

Are members of the CBC too stupid to play with more than one card? They are acting as stupid as Nazi’s say they are. smh

There’s no evidence for Bannon’s being a racist or a white supremacist sympathizer. But people like this don’t want to confuse arguments with facts.

Let them keep slinging the racist/white supremacist nonsense. The more they yodel the less impact it has.

When you’re a self-appointed fighter against racism and injustice, you have make sure there’s a steady supply of both. If there isn’t, you make it up. If you didn’t, you’d be out of a job.

By the way, does Squeaker Ryan – leader of the White Congressional Caucus – have a comment?

anyone else tired of all this?

They really don’t realize how frightened they look with their passive aggressive strategy. They want to keep their flock pure.

I’m SO tired of the constant, unfounded, unproven racist accusations from the Demorats. Now they’re trying to sell the War on Women thing again. But…as long as they can’t see that the voters have gotten wise to their game they’ll continue to lose so keep on keeping on!

“Stone cold racist” Unlike of course, the CBC, which by it’s very existence screams “We are racists!”

“Stone cold racist” Unlike the CBC, which by it’s very existence screams “We are racists!”

I do not think that he at all looks like Steve Austin.