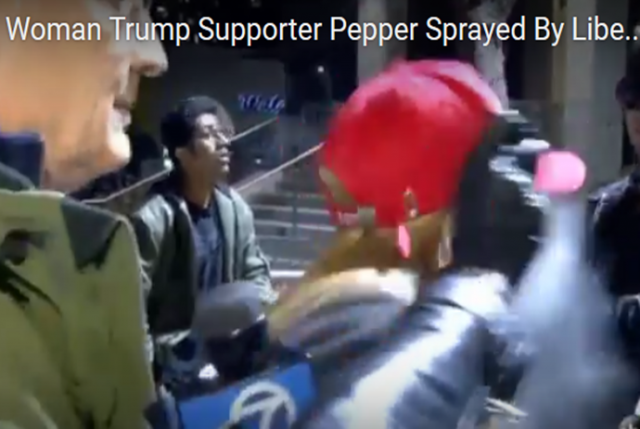 The smoke is clearing from the violent demonstration at University of California – Berkeley, and reports of attacks on conservative students who were planning to hear Breitbart editor Yiannopoulos are finding their way into social media.

For example, the pepper-spraying on a young woman wearing a Make Bitcoin Great Again cap.

Tolerant leftists pepper spray an innocent woman because she has a different opinion than them. #antifa #Berkeley #milo @RefuseFascism pic.twitter.com/qQ12p9Xr4f

The, there is the shovel-slamming of a fallen man:

Finally, a video of other acts of “tolerance” summarizes has been compiled.

As of now, only one arrest has been made in connection with the demonstrations.

UCPD has arrested one suspect at the Milo Yiannopoulos protests Wednesday night and two suspects in an unrelated incident Thursday morning.

Edward Thomas Kuo, 19, was arrested Wednesday night on suspicion of remaining “in the place of a riot,” according to UCPD spokesperson Sgt. Sabrina Reich.

“We had given a dispersal order,” Reich alleged. “He remained in the area and was blocking the path of the police, who were trying to move a skirmish line along.”

According to The Daily Californian, the victims seen in the above videos have not made formal reports. Hopefully, their friends and families will encourage them to do so in the name of real justice.

There was an extensive amount of property damage on campus as well.

Legal Insurrection readers should note that the newest flavor at Starbucks is karma:

After this massive disturbance, I was curious what our leading California politicians would have to say in regard to the rioting. While Senator Kamala Harris loved being part of the #WomensMarch, there was no statement on her thoughts about conservatives being denied their free speech rights. I couldn’t locate formal statements from Governor Jerry Brown or Senator Dianne Feinstein decrying the violence, either.

However, once President Donald Trump threatened to pull federal funds after the blatant attack on the First Amendment rights of the school’s conservative students, our state’s politicians had plenty to say:

Rep. Barbara Lee (D-Oakland), whose district includes the university, said in a statement that she was disappointed the protest turned violent, but cutting funding to a major U.S. university isn’t a valid response to protest.

“Berkeley has a proud history of dissent and students were fully within their rights to protest peacefully. However, I am disappointed by the unacceptable acts of violence last night which were counterproductive and dangerous,” she said. “President Donald Trump cannot bully our university into silence. Simply put, President Trump’s empty threat to cut funding from UC Berkeley is an abuse of power.”

“Berkeley is the center of the free speech movement. I think that the protesters have a right to free speech as well. If there is an infiltration of the crowd by those that are less than peaceful, that should be addressed,” she said.

So, in other words, our leading Democratic politicians target President Trump and defended the rioters.

“There’s nothing I’m aware of in federal law that would allow the federal government to strip financial aid funds or research funds from a university because the government claims they aren’t respecting First Amendment rights,” said Don Heller, the University of San Francisco provost and an expert in federal financial aid.

I sure hope that it is President Trump’s intent to counter California’s political leaders, who obviously find it more satisfying to attack him then to defend the rights of young Americans who they are supposedly representing.

No arrests because the people assaulted haven’t made formal complaints? What a crock, pardon my French.

The man lying in the street being beaten by the mob should not have to make a “formal complaint”. The crime is captured on film for all to see.

This is Berkeley, ground zero for the totalitarian Stalinist left. The UCPD and BPD could have witnessed the rioters murder a Trump supporter and they’d say they can’t make an arrest unless the victim makes a formal complaint.

Disclaimer: I am not a rocket scientist nor a lawyer but I would be willing to bet that any entity that receives federal funds and does not protect civil rights is in violation of said agreement to receive such funds. At least that is my understanding of watching the expert Constitutional Scholar Chicago Jesus operate the last 8 years 😉 by always throwing that warning about.

It’s not hard to see that you’d win that bet. Just ask yourself – what would happen if a major public university came out and said that affirmative action is wrong and they don’t support it? Oh you know what would happen, they’d be shutdown overnight. Free speech – HA!!!

title ix actually may work to some benefit here.

Where is the line drawn between spontaneous peaceful protests spurred on by a Youtube video and an organized, planned & financed act of domestic terror designed to deprive a whole class of people their civil rights?

In most of the west today, you get a pass as long as you scream “ALLAHU ACKBAR! while you’re doing it.

Except fortunately today, not at the Louvre.

These peaceful protesters seem to be drawn to Starbucks all the time. For the life of me I cannot figure out why Starbucks is a repeated target.

I keep hearing from liberals about a big uptick in race based attacks since election day but have seen no data or videos supporting that assertion. We do however, have ample documented evidence of a significant number of cowardly attacks committed by tolerant leftists on those with whom they disagree with the Berkeley example being perhaps the most egregious.

Compare the response to this reprehensible activity at Berkeley to the treatment of 2 male Babson students who drove through the campus of Wellesley College (about 2 miles from Babson) on election night with a Trump banner on their truck. What those boys did was dumb but completely harmless yet just about every member of the Babson faculty signed a letter condemning them with 48 hours of the incident and before any investigation was conducted. So many faculty signed the letter that only one faculty member was able to serve on the “honor” board which reviewed the case. In addition, the story received front page local coverage as well as national coverage.

Have any Berkeley faculty condemned the students involved in these actions?

Of course there has been a MASSIVE up tick in race based attacks. What you won’t hear though is thats because liberals are attacking as many whites as they can!

That’s because it started before the election — long before.

It’s more likely that Berkeley faculty members were among the masked rioters engaged in political violence then any of them will condemn it.

If there is an infiltration of the crowd by those that are less than peaceful, that should be addressed,” she said.

There is a way to address the problem. It’s called ‘prison’.

Giv’em a year in a cell with Bubba.

This helps explain this odd ranking of Dem priorities:

Of course, Williamson…one of the best and most insightful of conservative writers…is exactly correct.

I often read Williamson. Even he has bad days, as when he indicated Ivanka and her brothers are somehow like Saddam Hussein’s sons.

Another lie from Ragbag.

It has way more to do with both of you holding firmly to the belief that Trump supporters should just die.

“In a recent grab ‘n run test, 9 out of 10 looters prefer the taste of caramel macchiatos over plain coffee”

Can the Federal Government charge the rioters with civil rights violations?

What I don’t understand is why, with a violent riot and property damage ongoing, there was only one arrest.

Rep. Lee: “Berkeley has a proud history of dissent and students were fully within their rights to protest peacefully.”

Yes, UC-B does have a proud history of peaceful dissent and passive-resistance. Emphasis on the word history.

Rep. Pelosi: “Berkeley is the center of the free speech movement.”

RE: Starbucks: It’s almost a case of schadenfreude, watching the left eat its own. If I were that CEO, I’d now be opposing leftist policies and crediting the rioters’ destruction for it. “We supported you, and you broke our windows anyway. We now oppose you on principle.”

But that’s just me.