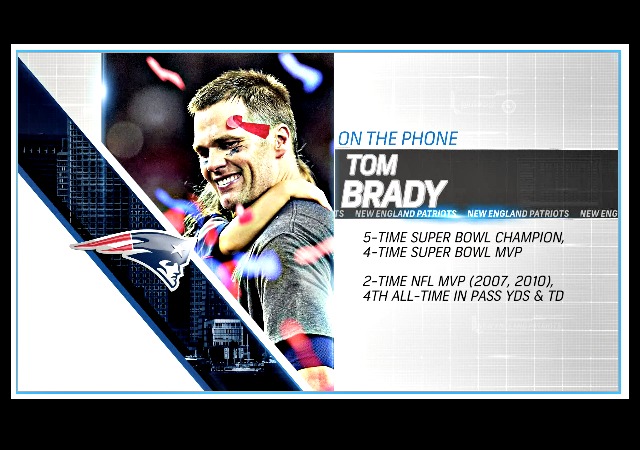 As Mary blogged, six Superbowl winning Patriots players won’t be joining the rest of the team during their White House visit. Some have indicated their abstention is due to policy differences with President Trump.

Patriots Quarterback Tom Brady says his choice to visit the White House over the years has not been a political one and refused to publicly litigate the decisions of his teammates.

“Everybody has their own choice.There’s certain years, like a couple years ago, I wanted to go and didn’t get the opportunity based on the schedule — we didn’t get told until I think like 10 days before we were going, and at that point I had something I’d been planning for months and couldn’t get there,” said Brady:

Brady has called President Trump a friend, but several Patriots have said they will not go because they oppose Trump’s policies. Brady skipped the Patriots’ only White House visit during the Obama years, but he said this morning on PFT Live that had nothing to do with politics.

The Patriots won three Super Bowls when George W. Bush was president, and Brady also went to the Bill Clinton White House in college when Michigan won the national championship. He considers it a valuable experience, but he understands that not everyone will make it.

“It really is a great experience,” Brady said. “Putting politics aside, it never was a political thing. At least, it never was to me. It meant you won a championship and you got to experience something cool with your team, with your teammates. Everyone has their own choice. It’s an offseason. These days are valuable for everybody. You only get so much time with your family and friends, and if people don’t want to go they don’t want to go and that’s their choice.”

Meanwhile, Sports Illustrated is ESPN-ing their coverage, doing their best to make the whole ordeal political. 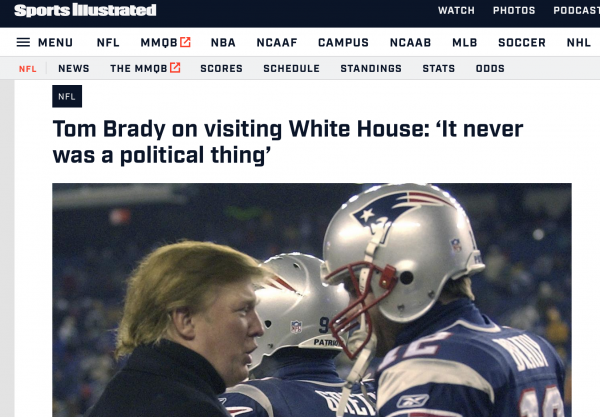 Brady is friends with President Trump and displayed a “Make America Great Again” hat in his locker shortly after the businessman announced his candidacy for the Republican nomination. Patriots owner Robert Kraft and coach Bill Belichick are also friends with Trump.

Im a Packer fan to the end , but New England, I am so proud of you, Brady and your comeback… kind of like someone we know.

I hate to pick at nits but that picture is from the wrong Superbowl.

There was another one?

There are FIVE of them to choose from…. easily confusing after SO MANY wins. (PS I am not a dyed in the wool Patriots fan but excellence must be recognized).

IT was still the Patroits. There as some foreign newspaper that put the Baldwin SNL photo of Trump in their article…. now that’s a mistake!

sigh…must remember to use preview… “Patriots” …

I grew up in Detroit, so my fingers kinda just go in the “oi” manner instead of “io”. That’s my story..

In that picture, I like the way the Patriots logo on the helmet behind Trump makes his hair look EPIC!

Plus Malcolm Butler is going I think.

And they just keep “disclosing” themselves.

Thanks to those six for their “disclosure.”
Someone else should support them – financially, et. al.

A few years ago, when a lady friend of mine started watching NFL games with me (she is now a fan), I told her, “There’s only one thing you need to know about football – Tom effing Brady.”

Putting politics aside, it never was a political thing.

Well, why not? That’s where the real fame and fortune lie.

What about the Cubs having to visit the WH so that a White Sox fan can bask in their glory?

Trump should have them over just so they can get the bad taste out of their mouths.